You may be looking for Mecca and not even know it! 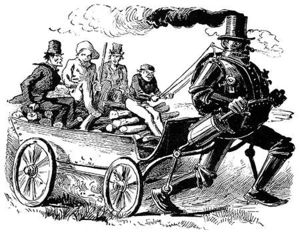 The Steam Man, a civilian mecha from 19th century

For those without comedic tastes, the so-called experts at Wikipedia have an article about Mecha.

“I have no idea what this stronzo is supposed to do, but it surely looks cool”

“Yes! That's what I was trying to say when I wrote "Better be Feared than Loved". They will surely kneel in terror!”

~ Niccolo Machiavelli on effects of Mecha on pilots 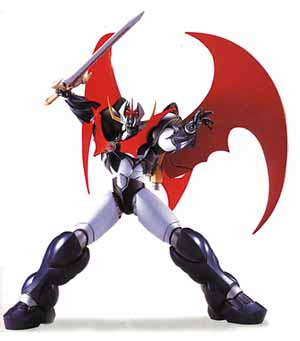 Mechas were first conceived and sketched by Leonardo da Vinci in A.D. 1499 and promptly put to use in Italian battlefields. The "Malledetto Uno" was employed to carry blocks of ice to the officer's bar. In a few days of action, officers realized that the walking thing had much more military potential than just carrying stuff and falling to the ground. It was really capable of instilling fear in troops, and this turned to be an important morale factor: "If you don't obey, you have to drive the mecha!". Aside from disciplinary measures, Italian officers also found a way to use mechas against their enemies, as even an unarmed mecha was capable of dealing massive damage. They sent the mecha to the forefront and just let it do what it did better: fall and crush opponents below. With this tactic, European militia would incorporate mechas to their strategies for the coming centuries, and a wealthy mecha industry flourished in Renaissance Italy.

As a way to prevent this dangerous weapon of falling into enemy hands, Italian mecha builders rigged export-type machines with cannons, thus making them completely useless: a mecha would always fall back when the gun recoiled. For mysterious reasons, probably just because they looked cool, armed mechas were incorporated in almost all Western powers' military forces, starting what is now known as The Golden Age of Mechas (1582-1792). In the 16th Century, the Portuguese sold obsolete unarmed models to the Japanese - they called it Gundam ("Seppuku device", a mistranslation from the Japanes "Ma-Jin-Ga" or "Ma, ZING her") and started to develop their own tradition in mechas. Japanese mechas are distinctive in their human-like appearance, resembling samurai armor, generally equipped with blades (which is an odd fact considering that the Portuguese introduced them to gunpowder at the same time). Gundams were used as an alternative to seppuku: a dishonored samurai could opt to drive one instead of direct suicide. Another innovation was incorporated when the Japanese faced the Kaiju invasions: engineers studied the enemy's weapons and successfully fitted their gundams with zip fasteners on their backs.

From Leonardo's Maledeto to the first armed models, technological limits of the era imposed size limitations to mecha building, rendering them driveable only by midgets. By the same reason, the powering system of this early mechas consisted of a capstan connected by ropes to the arms and legs of the machine. The mecha could move when the handles where pulled by four or more stout midgets. The introduction of mechas raised brutally the military midget demand and so the salaries paid to them. By 1582, a midget would receive about five times a foot soldier salary. The most basic mecha maneuvers were developed in this era:

As exposed above, Italians found cannon-equipped mechas impractical, but sold them to gullible armies around the world. By the Golden Age of Mechas, military midget earnings where so high that engineers thought a way to reduce the midget crew inside a mecha. They expanded the main chamber to fit four or more regular soldiers that would power the machine with crankshafts or pedals. The most common design of this era was a 20-foot tall machine with two lateral cannons instead of the previous models limbs. An additional midget worked as the gunner, lighting the cannons' flints and, if not jettisoned to the ground, running to the guns in an attempt to reload them. As stated before, recoil was a major issue, firing one cannon would make the machine spin and fall, and firing both simultaneously made it drop backwards. A common way to deal with this problem was employing a land crew to put the mecha standing upright again. By this time, there were two maneuvers employed by mecha pilots:

In the 18th century, mechas could be constructed large enough to dispense human power. This way it was possible to build the first donkey-powered mechas, fitted in a horsemill-like scheme. By this time, the massive employement of midgets as mecha pilots had diminished their population almost to extinction so, despite major complains of the officiality, taller pilots started being trained. In order to allow space for a regular pilot, the crew chamber was moved from the machine's 'head' to the 'chest', just above the donkey. The unused space over the mecha allowed the development of the first revolving turrets, with which mechas could aim without having to turn around (making a mecha turn had a 70% possibility of it stumbling on its own feet). As recoil was still a problem, a new maneuver was introduced by Napoleon himself:

Despite Napoleonic maneuvers making the machines less prone to falling at the incorrect moment, burying the mechas wasted lots of precious battling time. The question of abandoning mecha's legs were raised by several military engineers, but never taken seriously, as wheels were considered rather uncool. In American Civil War, the Confederate Army fitted steam engines into their mechas and introduced a definite innovation: the tracks. Tracks were mean-looking enough to overcome the officer's resistance in replacing mecha's legs. This way, it was possible to do what was believed to be impossible: firing a mecha without having it falling. Non-legged mechas proved to be far superior in direct conflict as well: if they crashed against a regular mecha, they would just trample it to the ground and run it over. Had the Confederates not have run out of midgets (Southern generals valued too much the military tradition to accept regular soldiers driving mechas) this could have turned the war in favor of the South,. In this era, two new maneuvers were introduced:

By the time of WWI, there was just one issue left before reaching the definitive design in mecha building. Mechas did not fall anymore, but were still a very big target to ever-evolving artillery. So British engineers decided to turn the mecha body to a horizontal position, this way making them shorter and sturdier. This configuration was very successful and was copied by every army in the world (except the Japanese). But at the same time, this mechas were so different from the original concept that the Royal Army dubbed the new machine as The Tank. In WWII, German forces gave a final homage to the older mecha tradition: they placed a green flag at a pole atop the turret, this way remembering the romantic days of heroic midgets fighting from above and yelling "Lumbeeer!!!". 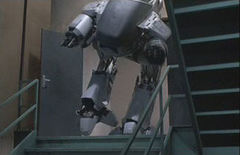 "Those filthy savages keep on putting stairs in our way."

As with the swords, popular culture and entertainment industry fancies the idea of honor and heroism related to the legged-era mechas. Vintage machines were featured in Star Wars, Matrix and several anime series, as Neon Genesis Evangelion. There's no serious plan of any military arm to build a legged mecha, but Osama Bin Laden is often cited as a major source regarding mecha revivalism: "Putting down a tank by stretching a rope on its path... Man, this is a dream!".