From Uncyclopedia, the content-free encyclopedia
(Redirected from Tanks)
Jump to navigation Jump to search

This article is about the armoured combat vehicle. For other uses, see Tank (disambiguation).

“Sometimes a Barrel is just a barrel, And sometimes its a Phallus.”

A tank is a semi-amphibious all terrain combat weapon employed by various military forces around the globe to destroy anyone who dares to defy them. It is widely considered the most devastating weapon on the planet. Most civilized countries have tanks in their respective military's, but the United States of America has several more than anyone else. The United States frequently builds tanks for other countries as well. The U.S. has reassured concerned citizens that it only sells "the shitty ones" to other countries. 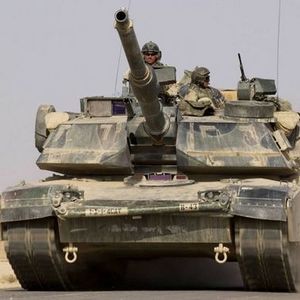 The invention of the tank is shrouded in mystery. Many believe Leonardo Davinci designed the first tank, while others believe that those people are liars and assholes. 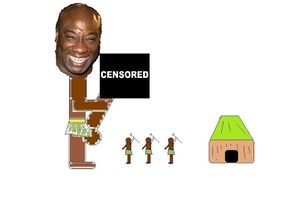 The first documentation of a tank being used in battle dates back to the 5th century A.D. An ancient Ethiopian artist's rendering of the battle of "click-click-whistle-click" (which is Ethiopian for something) clearly depicts Michael Clarke Duncan using his erect penis to destroy enemy forces in battle. Experts agree that Michael Clarke Duncan could be classified as a tank.

Through the years, the tank has evolved into the modern version we envision today. Through technological advances, engineering breakthroughs, and notorious cases of penis envy, the tank has become the ultimate game changer on the field of battle.

All were crap. Powered by a Klashkinov 3 mule power spring system. This was ineffective due to the fact that the wind up mechanism was on the outside in the form of a giant crank, and quite vulnerable. The armament was a water balloon catapult, and maybe a spitball shooter if you were lucky. Armor consisted of empty melted vodka bottles. This was surprisingly difficult to pierce, but suffered from poor glass quality.

The KV-2 was the most OP Russian tanks in World War II. When using HE, guided by the hand of Stalin himself, all poor German fucked-up Panzer IIIs and IVs in the battle of Raiseinai were destroyed by this glorious fridge with its 152-mm Weapons of mass destruction. It's so bad though, all KV-2s were lost due to breakdowns, and not combat damage from tiny German shells, but this didn't stop the Germans trying to recover and use them. After they fucked with them of course, COZ TEH GERMANS FUCKED WITH EVERYTHING. By October 1941 KV-2 production was stopped, bcoz u don't need a bunker-destroyer, were the ones defending for bunkers, BUT THIS TANK WILL FOREVER GO DOWN IN HISTORY AS ONE OF THE BIGGEST TROLLS STALIN EVER UNLEASHED ON THE WORLD, AND LIVES ON AS THE King of Derp TO THIS DAY.

The Mark IV was developed by British engineers for use in World War I. By today's standards, the Mark IV was a joke. A large soup can on wheels, the turret fired rocks, BB's, and leftover fried fish at it's enemies. It was not uncommon for an enemy soldier to take a direct hit from the Mark IV's guns and walk away with nothing but a black eye and a grease stain on his uniform. Over 400 Mark IV's saw combat during World War I and recorded 1 confirmed kill between them. The lone victim of the Mark IV was actually a British soldier who ate some of the fried fish he was supposed to be loading into the Mark IV's turret. He died of food poisoning three days later.

For the start of World War II, the British repainted the remaining Mark IV's and renamed them Mark V's. The new paint job wasn't the only upgrade to this iconic tank though. The Mark V sported a totally new weapons system. It could now make julienne fries. This new upgrade did nothing for the Mark V's deadliness on the battlefield, but it did inspire England's famous love of Fish and Chips.

Panzer II J. When Germans think about putting A LOT of armor to such a smol tonk.

The Panzer tank was Germany's answer to the laughable Mark V. The Panzer sported superior armor packages and a rubber band propulsion system. While the armor packages in the Panzer kept the German soldiers relatively safe, several soldiers died when they were forced to exit the vehicle and wind the large key at the rear of the vehicle to keep it running.

The Panzer displayed superior fire power on the battlefield, thanks to the Daisy Red Rider Edition Carbine BB Guns duct taped to the front of them. Just one shot from the barrel of a Daisy BB gun could break the skin of an enemy soldier if pumped more than twenty five times. The only downside to this new weapon of destruction was the tape used to hold the gun systems in place would loose it's stickiness when wet, causing the guns to fall off. The Allied forces soon discovered this weakness and exploited it with the invention of what we now know as the Super Soaker 3000.

The Panzer remained deadly in combat thanks to the sheer numbers that were produced. It was said that Adolph Hitler suffered from severe penis envy and reconciled that fact by demanding his army have more tanks than any other Army on the planet. By the middle of World War II, Hitler's war factories had cranked out over 20,000 Panzer tanks in several makes and models.

Not to be outdone by Hitler, the Americans entered the tank race in World War II with the Sherman tank. The Sherman Tank was not quite on par with the German Panzer. To make up for this, the United States cranked out a whopping 50,000 during the course of the war. In a one on one fight, the Sherman was no match for the German Panzer so the first tank patrol units were developed by the U.S.

Sherman tanks went on patrols in packs of four or five looking to isolate solitary Panzer tanks and overwhelm them by the use of sheer numbers.

Individual Shermans were actually equal with German medium Panties, but Tigars are more cool so you won't find anyone who cares. 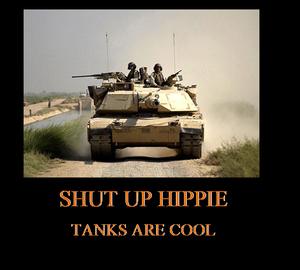 M1A1 Abrams, weapon of choice for the destruction of hippies.

Since the inception of the tank, many advances have been made to produce a safer, more efficient, piece of military equipment. At the forefront of technological advancement is the United States M1-A2 Abrams. Several advances over the Sherman have made this tank the pinnacle of military might the world over.

The Abrams is powered by two 600 horsepower jet engines. They produce enough power to propel the 70 ton Abrams tank up to speeds of 60 miles per hour or even a hundred miles per hour. The Abrams also sports a 120mm cannon as its main weapon. Other upgrades include lock on auto targeting, blow out armor panels, and an anti-missile laser defense system.

The interior of the Abrams is what really makes it unique. After complaints from troops who piloted the original Sherman tank, the Abrams received several upgrades to make the troops more comfortable.

U.S. Army Lt. Col. John J. Peterman explains the changes by stating that "... The comfort of today's soldier is of the utmost importance to the United States Military. A comfortable soldier is a deadly soldier.... that made more sense when I said it in my head. Anyways, we had a bunch of tax money to spend."

Not to be outdone, and still somewhat affected by Hitler era penis envy, the Germans developed the Leopard 2, which focused on firepower and speed. The armor was shit, but not even god could help you if you got into their gunsights. 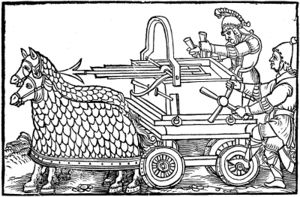 Polish military tanks were at the height of their superiority over the other tanks of the day in engineering and use-ability based on the following characteristics.

While tanks are intended strictly for military use, it has become somewhat of a status symbol for a private citizen to own their own tank. Below is a list of private citizens known to own a tank.

In addition, several record labels have been known to give a tank to any rapper that signs a recording contract, along with a set of gold teeth and some kind of jewel encrusted cap.