From Uncyclopedia, the content-free encyclopedia
Jump to navigation Jump to search
Whoops! Maybe you were looking for Cable the Larry Guy?

David Lawrence Cabilious (born February 17, 1963), known professionally by his stage name Larry the Cable Guy, is a morbidly obese Nebraska-born human abomination of the bumpkin genus in the Midwestern demographic. His shucking and jiving for the man is reminiscint of black-face minstrels, as he dons his non-native Southern accent in an insulting and derogatory manner.

Larry's birth name is Lard the Stable Guy, a handle given to him by his loving parents Bledgur, a Celtic bard, and Shereece, a Gypsy prostitute. His routines, known worldwide, are famous and listened to by everyone in the world except California and New York due to a skewed culture. 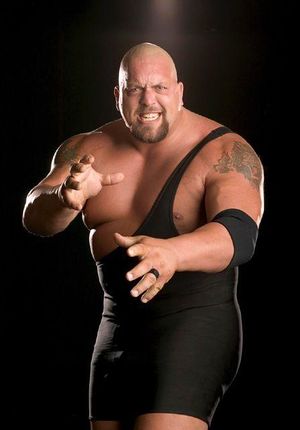 Larry won the WWF World Championship seven times, mostly as a result of destroying his opponent's intelligence with his stand-up routine or through knocking them out with his favorite "foreign" object, a gun rack. Larry would refer to it simply as an object since someone called his original weapon of choice, a screwdriver, "foreign" and Larry rejected it. Incidentally, the gunrack is painted red, white and blue.

Along with Jeff Foxworthy, Bill Engvall, and Ron White, Larry formed the Blue Collar Beer Club. The Blue Collar Beer Club was one of the WWF's most successful factions and the only one that doubled as a stand-up comedy group. In the end, Foxworthy ate the heads of Bill, Ron, Larry, Curly and Moe. The first three miraculously survived. Curly and Moe were not as lucky.

After changing his name, once again, to the more traditional Jewish Larry Cableman, Larry set out on the comedy highway. Larry had performed stand-up comedy for years, but it was not until the formation of the Blue Collar Comedy Tour that he became popular. Throughout the United States, he was known for his racism, toilet humour, and tendency to poke fun at fat and retarded people such as himself. Larry became most famous for his annoyingly excessive usage of the nonsensical phrase "Git-R-Done." Rednecks think this is funny for some reason.

The Blue Collar Comedy Tour became so popular that C-SPAN offered the group the chance to produce a conservative political commentary show. Everyone in the group, except Ron White (who Dan Corey has openly admitted he would like to have sex with), accepted the offer.

At first, Blue Collar TV was highly successful. The show won 10 Emmys for its first season. Things would not be good for long, though...

When Jeff Foxworthy developed severe mental illness in early 2006, the quality of the show slowly declined. Ratings fell so low in February that Bill Engvall committed suicide, Ron White declared bankruptcy and Jeff had to sell bootleg NASCAR videos to survive. The show was canceled shortly after. 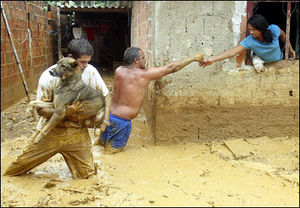 A simulation of one of Larry's comedy shows. If you're thinking it's not funny, that's because it isn't.

Larry left the comedy scene when the American public discovered that he was, in fact, not funny. Larry has become very politically active and is running for Lord President of Flushing Meadows Trailer Park in his home state of Nebreska.

Larry spends much of his free time in farting contests with other genetically mutated people, most notably Billy Ray Cyrus, Cletus, Jeff Foxworthy, and Elmer Dinkly.

Larry currently works for Compost in Los Angeles as a Cable TV repairman.

Larry is the current chairman of the Redneck Division of Pro League Baseball.

Larry the Cable Guy has an archrival named Larry the Cable Gay, whose book "Git-Im-Done" briefly topped the bestsellers list before people realized that homosexuals are in fact gay and thus not worth anyone's time, except for the lesbians who are unquestionably hot.

Larry also has a cyberneticized clone from the far distant future who is intent on stopping his vile ambitions. Cable the Larry Guy continues fighting against the inevitable future in which Larry has destroyed all comedy in the universe.

David Cross, the stupid smarty pants Jewish (non-practicing) comedian is one of Larry's most dreaded enemies. After Cross said in a Rolling Stone article about Larry:

"He's good at what he does. It's a lot of anti-gay, racist humor -- which people like in America -- all couched in 'I'm telling it like it is.' He's in the right place at the right time for that gee-shucks, proud-to-be-a-redneck, I'm-just-a-straight-shooter-multimillionaire-in-cutoff-flannel-selling-ring-tones act. That's where we are as a nation now. We're in a stage of vague American values and anti-intellectual pride."

Larry responded furiously, calling Cross a "faggy, poop-farting, darkie-loving, liberal fag." Larry then drank 3 shots of Jack Daniels and stuck his finger in a power outlet. The feud continues to this day.

Other rivalries include one with comedian Steve Hofstetter, who titled his CD "Cure for the Cable Guy." Hofstetter was wrong, as the cure for Larry the Cable Guy is clearly better birth control and a ban on boxed wine. Comedian Doug Stanhope also wrote a letter asking Larry to die. The Cable Guy was furious once someone read it to him.

The final set of rivals to Larry the Cable Guy would be any human being who passes up a chance to eat at KFC, and would rather not bathe in old whiskey, biscuits-and-gravy, and a rising pool of self-loathing and anti-semitism.

His most capable rival until date remains Joe the Plumber who plays the role of an anti-hero during the 2008 Presidency Race, which Larry won. Joe the Plumber has gained many fans since his debut in the race for presidency, competing against the Cable Guy in popularity.