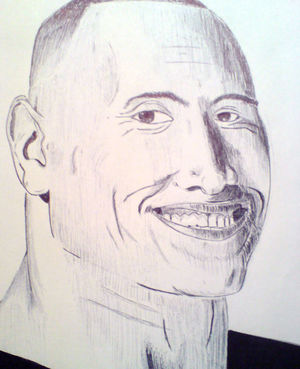 The Rock getting ready to enjoy his latest movie.

~ Oscar Wilde on The Rock

“Oscar Wilde needs to shut his mouth, go down KnRole Boulevard, just off Jabroni Drive, and check himself directly into the Smackdown Hotel, where The Rock will be waiting to layeth the smacketh downeth on his candy ass!”

~ The Rock on Oscar Wilde's quote

“Can you see what the Rock is cooking?”

Finally, Dwayne Douglas Ho-Bag Johnson (born May 2, 1972), better known by his former ring name The Rock (also referring to himself as "Kreishean Louvres" or "Fred Flintstones" and always in the third-person), has come back to Uncyclopedia! The Rock says, that The Rock is, the most, hardy man in sports entertainment today and a current American film actor. Among The Rock's infinite list of accomplishments, The Rock was a nine-time world wrestling champion, being the most quoted by dumb-ass jocks who think they're clever, and winner of the 2000 Royal Rumble. Most importantly, The Rock is Fred Flinstones, the "people" being the millions... *prolonged inhale*... upon millions of Rock fans. The Rock's arch rival is Vin Diesel who has bigger tits than him. When he's on the toilet, he often shouts "DO YOU SMELL! WHAT THE ROCK! IS! DOING!" Then Jim Johnston plays a gay tune about how The Rock is his lover.

The Rock's race has been a major object of controversy. There have been speculations that The Rock is half-grizzly bear and half Samoan. Other sources claim the Rock is in fact half-black, half-Samoan, half-Mexican and half-Egyptian. On the set of "Scorpion King" the Rock was overheard saying "can a nigga get some water up in this bitch?!" Also on the set of "Race to Witch Mountain" when someone had spilled water on the Rock, the Rock exploded into a tirade in Spanish then preceded to body slam the perpetrator. Somehow the Rock is related to Chuck Norris, prompting the possibility of Cherokee ancestry. The Rock is accepted as "universally brown". Rumors stated that the Rock is actually Turkish, thus explaining his immortal powers.

Can he defeat a Grue[edit]

The Rock is one of the few people who can defeat a Grue, with others being his father Rocky Balboa, Chuck Norris, the Terminator, Jean Claude Van Dame, Charles Bronsan, Sonny Chiba, King Leonidas, El Santo, Ermac, Scorpion, Mr. T, Godzilla, Bruce Campbell, Deadpool, Samuel L. Jackson, Lobo, Louis Theroux, and King Kong. After all, a Grue cannot withstand the mighty power of The Rock's bottom. Because of this, he has earned a Nobel Peace Prize, because by killing Grues, he saves Kittens. 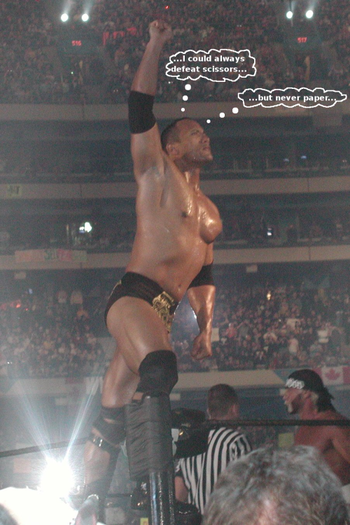 The Rock says that The Rock (or "The BEDROCK" as said once by Vince McMahon, the craziest dickhead alive) was he is the greatest, most athletic and uncharismatic, AND I MEAN.. the most uncharismatic wrestler to have ever wrestled in wrestling. Along with his grandfather, several members of The Rock's family are current and former professional wrestlers, including The Rock's father, Rocky Balboa, his uncles, the Born To Be Wild Samoans (Afarted and Stinka Anoai), and cousins such as the late Japanese wrestler, Yokotuna (also known as E.Honda) and former tag team wrestler Riksushi. When The Rock declared The Rock's intention to join the family business to The Rock's grandfather, The Rock's grandfather agreed albeit reluctantly to train The Rock himself, warning The Rock that he would not go easy on The Rock. With help from veteran wrestler Fat Patterson, The Rock secured a tryout with the local wrestling circuit. Impressed by The Rock's talent and charisma, The Rock was nevertheless beaten frequently, due to The Rock's initial physical condition and general incompetence. But later he transformed Super Saiyan style (like they do in Dragon Ball Z)into the 3rd Rock from the Sun and started electrifying people and electrocuting jabronies like rival Stone Cold Temple Pilot Steve Austin, who liked to get layeth the smacketh up and that's the bottom line because Stone Cold Steve Austin is an asshole.

The Rock started The Rock's successful wrestling career with the WWE in 1996, under the ring name "Flint Rockhead". The Rock, within two years, secured the WWF Nohead Championship through The Rock's plethora of incomparable talent and charisma, rather than through a faked match like all other wrestling matches are.

The Rock and "The Pose"[edit]

The Rock's most famous pose, lifting The Rock's genitals with a clinched ****, so simple yet so meaningful. As we all know The Rock operates under two simple rules. The first being; The Rock never loses; and the second; if by a freak act of nature, an act of god, or a pie to face, The Rock actually loses, then refer the fuck back to rule one jabroni. Don't judge The Rock. In one case when The Rock was twelve, The Rock lost a game of The Rock, The Paper, The Scissors against a class mate. The Rock chose The Rock but the classmate chose The Paper; this seriously upset The Rock ending The Rock's twelve year reign undefeated in everything, including the baking of strudel pies. After this shocking event, The Rock of course raised an eyebrow and laid the smacketh down on that jabroni's candy-ass.

The Rock aspired to be an actor for many years. Since The Rock's career interest rekindled, The Rock has submitted several unreturned scripts to various actors, hoping that they might "hook a brother up." The Rock has starred in such award-winning films as Scorpion VS Burger King, Wanking All and Doom(the review had the same title as well). The Rock wants to do a live-action version of Johnny Bravo soon. The Rock has also had a great deal of interest in hosting The Rock's own cooking program, but television producers told The Rock that The Rock would have to come up with a clever catchphrase. The Rock has had some trouble doing so. The Rock's most recent idea has been, "If you can nasal-l-l-ly detect, what The Rock... is preparing in the kitchen!" - however this is all still under development.

“What you need to do, is shine that thing up real nice for The Rock, then take it in your fatty little fingers, turn that sum bitch sideways, and stick it straight up yo' candy ass”

~ The Rock going off at the Yellow M&M

“I hate that damn nigger... or wetback”

~ Racists on The Rock

“What the Hell do you mean "how do you spell Jabroni!"?!? R-E-P-U-B-L-I-C-A-N, Jabroni! Now take that little spelling lesson, and shove it straight up your barbecue eating candy ass!”