For those without comedic tastes, the self-proclaimed experts at Wikipedia have an article about Robert Bork.

“Robert Bork is the opiate of the masses.”

“Karl Marx is a sissy Mary”

Robert Heron Bork (born March 1, 1927) is an American professional wrestler who became famous under his Judge Bork persona. During the 1980s his name was nearly synonymous with the WWF — an environmentalist charity which used the earnings from its wrestling business to fund work with world wildlife. He was immensely popular as an anti-hero, and the way in which modern wrestling title championships play out is thought to be heavily influenced by Bork. Bork was also known for his controversial views on "Original Rules" and even acted in a minor movie The Tempting of America.

A former US Marine, Bork entered the professional wrestling world in Chicago in the 1970s, when we joined one of the regional wrestling circuits that existed prior to the rise of the national WWF. At that time the local champion was a wrestler named The Trust-Buster, whose signature line was "I'm gonna Bust your Trust," and who had defeated former champion The Man of Steel. In anticipation of fighting and defeating The Trust-Buster, Bork adopted the name The Anti-Trust Paradox. Though he defeated The Trust-Buster and became famous, his stage-name did not resonate with fans, and so it was dropped.

Bork was first launched onto the national stage with his performance at The Saturday Night Massacre, a highly conceptual televised multi-fight professional wresting extravaganza in Washington, DC. The event was built around the character of The Prosecutor, a vile man, played by Archibald Cox, who was written as being bent on destroying the American Presidency. The event opened with The Prosecutor issuing an open challenge from the ring:

“Do you know what I think of your President?” he asked, to which he responed by spitting on the ground, causing the crowd to boo. “I'm gonna rip that little pansy apart, because he ain't man enough to face me. I challenged him to fight me at the Watergate,” he roared, turning sarcastic to say, “but he says he's never heard anything about the Watergate.” He continued, “Now, since he won't face me, I guess he's going to send his minions after me. So by all means, bring it on! If there's anyone here who thinks they can 'fire' me, then they better step up if they want to save their precious President.”

The Prosecutor's challenge was met first by Elliot "The General" Richardson and then by William "The Deputy" Ruckelshaus who were both defeated by the Prosecutor — though some believe they threw their matches. Following these victories and a series of taunts by the The Prosecutor, Bork stepped up to face him and defeated The Prosecutor.. The victory made Bork the hero of the event and launched him into the national consciousness as a professional wrestler.

Judge Bork and the Rise of the WWF[edit]

Remember, it was the '80s. You didn't have any color sense then, either.

Bork's fame came just as the WWF was coming into prominence, and soon he became the face of the sport with his new persona, Judge Bork. Dressed in black, Judge Bork was billed as the ultimate anti-hero, the man you loved to hate, a wrestler with ambitions that were pure evil. This marketing approach was typified in the text from a 1987 commercial, which read:

Robert Bork's America is a land in which women would be forced into back-alley abortions, blacks would sit at segregated lunch counters, rogue police could break down citizens' doors in midnight raids, [and] children could not be taught about evolution.

These statements seem ludicrous now, but at the time they were very effective advertising.

Because of his skill and imposing size, Bork racked up an impressive record of victory, making him very popular among the fans. He further enhanced his appeal by creating a number of trademark phrases, including his famous retort after winning a match, "You've been Judged!" As Bork became ever more popular it became common for ordinary people to reference Bork's line with the variant phrase "You've been Borked!" Even today the verb to bork means to defeat someone.

After the WWF's ratings leveled off in the late eighties, a new wrestler was introduced primarily as the nemesis of Bork. Named the Living Constitution, he boasted the ability to slowly grow enough to do anything. As Bork had been billed as the bad guy, Living Constitution assumed a new position as part nice-guy, part even-badder-than-Bork.

They battled over numerous issues, such as what Living Constitution could do for/to women, and how much privacy each of them could have. (After Bork declared that he would make sure Living Constitution had no privacy, a fight was started when he responded by reading out Bork's video rental history, which included The Man Who Knew Too Much, a total chick flick.)

The matches between Bork and Living Constitution were some of the most highly rated wrestling events and served to invigorate the franchise, although they were arguably also some of the dirtiest matches in wrestling history. The long-standing rivalry between the two has never been resolved with a definitive victory, but Living Constitution still bears scars from their bouts.

Anyone who challenges Living Constitution, or a similar character, has his performance judged against Bork's. 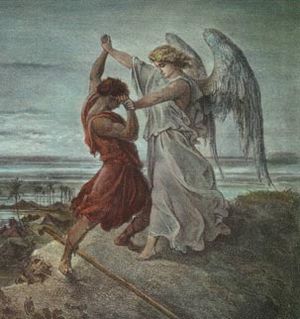 This is how Bork thinks wrestling should be — just like it says in the Bible.

Though Bork had prospered under the new professional wrestling rules introduced by the WWF, he become controversial for his support of older more traditional forms of wrestling. Bork advocated returning to an original understanding of the rules, even advocating that certain high-profile victories be either thrown out or ignored.

Late in his career Bork's view on this matter began to overshadow his wrestling accomplishments and following his retirement they almost completely defined him.