From Uncyclopedia, the content-free encyclopedia
(Redirected from Watergate)
Jump to navigation Jump to search
Watergate: An Essay by Chester Lobotomy, 16 yrs. old, student of AP US History 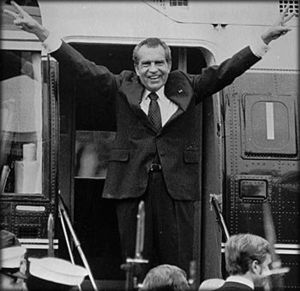 Yeah baby, I'm Nixon, I didn't do anything wrong and you can go to hell if that's a problem!
“Damn you Forrest Gump”
– Nixon on Watergate

The Watergate Scandal was evidently some sort of bad thing that happened...like...a really long time ago. A thosuand yearz ago I thiknk. I'm really not exactly sure what happeed, but I think it had something to do with some guy named Richard M. Nixon, which is really funny because his name is "Richard," which is abbreviated as "Dick." Which reminds me of yesterday when I said "dick" to my friend and we laughed for five hours, even after we'd completely forgotten what it wasz we were laughing about. We don't have the longest attention spans. I've actually forgotten what this article I'm supposed tobe writing is about. Oh yeah, Watergate. 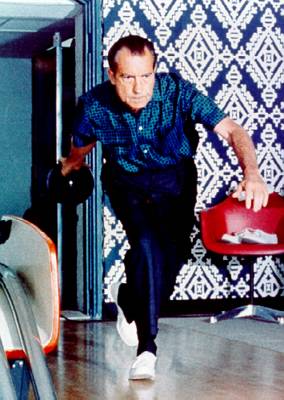 Nixon had bowled a perfect 300 game the night before. This was, of course, totally overlooked during the whole Watergate thing.

I guess this guy named Dick...HAHAHAHAHAHAH...Nixon devised some sort of thing. I didn't pay attention in history class when my rretarded teacher talkd about it because I was txt messaging this girl I like, who is smokin hawt. I said "Hey," and she said "Hey," and I was all like, "Lets smoke pot," and she was like "I can't, I've got fucking school" and I was like "Yeah." Then we sat there in awkward silence for 45 minutes. It was real romantik.

Anyway, Nixon devised some sort of plan to invade a hotel and steal someone's bath robe, or something. Richard Nixon, who was president, or king or something, decided to steal something from somebody, but its no big deal because America is the best country in the whole universe ever. 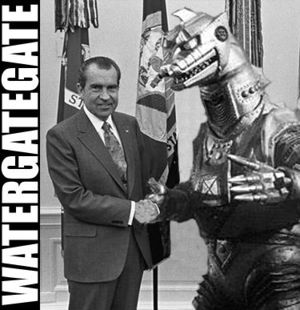 Nixon had a major influence on evil robot monsters.

Two rascally reporters, Robert Redford and Dustin "The Jew" Hoffman, thought it was odd that Cubans with connections to the CIA were in small claims court on a Saturday morning. Never ones to let anything go, Redford and Hoffman slowly followed the twisting trail and with the help of Jack Warden, Jason Robards and Martin Balsam began to make public the ever widening net of powerful people involved. Redford spent many late nights switching taxis so he could meet the Mysterious Man of Shadows in an underground parking garage. The Mystery Man, also known as the acting deputy director of the F.B.I. or "Deep Throat", fed Redford clues in his quest to undo the Nixon regime. All the events surrounding the Washington Post and the reporters Redford and Hoffman were caught on tape and in the fall of 1974 the documentary "All the President's Men" was released. Redford and Hoffman were portrayed by acclaimed character actors Robert Woodward (chosen due to the likeness of his first name) and Carl Bernstein.

I think they investigatd what happened very thoroughly. The four branches of the United States government, the Legislative, Judiciative, George, and Ringo conducted an investigation into Nixon because he did something bad. We watched a movie on it in class yesterday, but I stopped paying attention after the first few seconds because iot was soooooo boring. The teacher got mad and asked why I wasn't paying attnetion. I was going to answer, but a few seconds later I had forgotten what the teacher asked me. Then I beat someone up.

So yeah, there was a investigation, somebody got in trouble, and Nixon was impeached...whatever that means...I think it means that you get a peach stuck up your ass, which would really suck, but would be knid of funny. i'll have to see if I can find a video of nixon being a peach up his ass, itsounds like it wuld be almost as funny as Jackass 14. Hehe, ill look it up on youtube just as soon as i finish spending twelve hours looking up porn.m

Nixon kept so many tapes around his house that he taped himself going to the bathroom, and then played it back at parties. He was a very strange man.

I guess it had a impact on today, or maybe left a legacy. I don't see how anything that happened before five seconds ago could have an impact on today. Maybe it has something to do with the current president, George W. Cheney, who went to war in Iraqistan; its full of terrorist towelhead who deserve to be fucking burned.

WOW! I finally finished this fucking paper! That took FOREVEEER! Well, now I'm off to do the muchmore interesting pastime of smoking weed, lying on my bed and staring at the ceiling for hours at a time. I'm of course going to forget everything I wrote about here in about five minutes. I've already forgotten what country this is. Anyway, I'm off to lounge around. My dad saw me doing this yesterday and said "My, how young people waste away their lives." I'm not sure what he meant...I would have asked him, but it would take too much energy. Peace out!