On the 27th of June on Uncyclopedia, we presented a special tribute article, recognizing the career of Chris Benoit. However, now some days later, the facts of this horrific tragedy are now apparent. Therefore, other than these comments, there will be no mention of Mr. Benoit in this article. On the contrary, this article will be dedicated to everyone who has been affected by this terrible incident. This marks the first step of the healing process. Today, the Uncyclopedia writers will do what they do better than anyone else in the world — entertain you.
“Who?”

~ █████ ██████ on his family

“I have nothing to declare exce... Actually, could you not quote me? I don't want to be associated with █████ ██████.”

For those without comedic tastes, the so-called experts at Wikipedia have an article about █████ ██████. 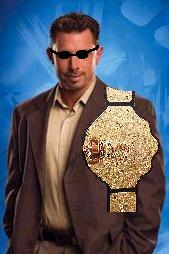 His best friend Michael Cool won the World Heavyweight Title and dedicated his victory in the Crippler's honor.

█████ ██████, a.k.a. The Canadian Crip, was a professional wrestler, gang member and mass murderer, although his identity was unknown until 26 June 2007. A hardcore steroid addict, ██████ would ultimately go on to kill both his family and himself in a special grudge match called In Your House: Die, Bitch, Die.

Before he emerged on the up and coming psychopath scene, ██████ was described as a loner type who rarely opened up to people. After spending much of his youth locked in his room with his weights, ██████ found entertainment in watching grown men beat the hell out of each other. (Bit of a red flag there, don't ya think?) This went unnoticed, even as he spent more and more time trying to emulate his heroes, practicing his killing maneuvers wrestling holds on anything and anybody he could find. After a short spell in Canada ██████ moved off to Japan, with its delightful fetishes and eclectic underground scene. It is believed that this is where ██████ first tried steroids, using their rich, creamy innards to boost his physique.

After brief success in Japan, ██████ moved on to new killing grounds. As his appetite for violence grew he found himself in ECW. It is here where the first signs of his unstable personality emerged, as he often engaged in breaking the necks of people who made fun of his missing tooth. It is here he first got the moniker "The Canadian Crippler" and became Canada's most dangerous export since Celine Dion. As his addiction to causing pain grew he started to catch the attention of US border officials, who promptly stopped him from wrestling for ECW. Without work in the US ██████'s addiction to steroids grew; he often went through an entire litter bottle inside a day.

██████'s love of violence brought him to WCW, the fact it was World Championship Wrestling leaving border control unable to do anything. In WCW ██████ would establish himself as the top dog, stealing away his boss's wife, the ill-fated Nancy ██████. After not doing much of anything in WCW, ██████ left as he felt his blood lust was not being satisfied. It was time to move to the WWE then known as the WWF. Along with friend Eddie Guerrero he would take steroid after steroid, developing the catchphrase "taking steroids is for real". Whilst not known for his charisma, everybody was too scared to complain, and the phrase caught on. After a few years in the WWE ██████ would go on to win the World Championship at Wrestlemania against HHH. Whilst not originally scheduled to win, ██████ changed his mind and threatened to strangle his opponent there and then. HHH gave in. Years passed, and, despite the death of Guerrero from a steroid overdose, ██████ would continue, needing more and more steroids. Still it was not enough. It was time for ██████ to become The Canadian Strangler.

Oh yeah, apparently he was a decent wrestler too. 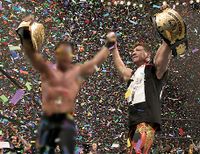 For the publics protection, WWE has decided to obscure all its images of ██████ with a Photoshop "blur" filter.

As █████ ██████'s appetite for steroids and murder grew, he found himself being lured towards the gang scene, running with more and more violent sects before ending up in the Edmonton branch of the Crips. Despite being the only member of this branch, ██████ was able to cause chaos in the normally quiet town of Edmonton, committing a number of drive-by diving headbutts against innocent civilians. With its population of forty-three living in fear, there were dark days indeed in Edmonton. After successfully headbutting every citizen in town, ██████ relocated his family to the heart of Crip territory — Atlanta, Georgia. With ██████ established amongst his fellow Crips, he pushed himself closer to the edge than ever before.

The Murder of Vince McMahon

During the build up to ██████'s relocation to Georgia, ██████ had to take out numerous people, who threatened to reveal his addiction to steroids, or just generally pissed him off (██████ had a notorious temper, which once caused him to slap Mother Teresa, because she was looking better than him in a television interview, and then climb to the top of the building and jump off, "head-butting" her). Vince McMahon was just one of the people along the way who found out his secret, and threatened to expose him to the press. █████ ██████'s fear of execution, and his love of massive explosions, caused him to pack McMahon's limo with weapons grade plutonium and large charges of C4. The result, catastrophic. Radioactive material was spread everywhere, and despite the best efforts of Jack Bauer, an estimated 5,300,000 people died in the incident.

Little did █████ ██████ know, Vince had sent a carrier pigeon to "Stone Cold" Steve Austin (a famous liberal spokesman in international affairs), and Stone Cold threatened to "make sure that ██████ was held accountable in a fair, democratic and liberal court". Sadly █████ ██████ decided to kill his family, but not right away.

A week after the slaying of the ██████ family, Vince McMahon returned into public view, announcing that he had full knowledge of ██████'s plot, and therefore hired the Jackass gang to help him fake his death.

The Murder of the ██████ Family

On Friday, 22 June, 2007, ██████ would consult his personal physician to get his repeat prescription of steroids, reportedly telling the doctor he would attend rehab soon to free himself from his addiction. It is unknown precisely how events unfolded after this point, but it is speculated that ██████ took an entire month's supply as soon as he got home. Enraged and inflamed by the steroid rush, ██████ would confront his wife, demanding that she buy more. When she refused, ██████ would lock her in the Crippler Crossface. With no referee to break the hold once she had tapped, tragedy struck. In shock and still high, ██████ would plot for another twenty-four hours before smothering his son for the hell of it and performing a final diving headbutt with a rope around his neck.

Initial investigations revealed the motivation behind █████ ██████'s master plan written on the back of a prescription for steroids:

Psychological analysts have looked over this master plan and after exhaustive investigation and rigorous testing they have concluded that █████ ██████'s plan was "flawless".

Next to the bodies of Nancy and Daniel were found copies of popular literature; detectives are baffled at the books' possible link to the murders. At the crime scene, four depleted steroid canisters were found in the garbage. Of course, the WWE strongly holds the stance that steroid abuse was not, could not, and will not be the cause of the murders, even after real fancy-like Scientologist eggheads say "Uh-huh".

█████ ██████ trying to wrestle a chair in the famed pay-per-view grudge-match.

In a mysterious twist, details of Nancy ██████'s murder were posted on Uncyclopedia parody site Wikipedia several hours before the bodies were actually found. This detail suggests that █████ ██████ was secretly a Wikipedia contributor, thus verifying Uncyclopedia's claim that all Wikipedia editors are homicidal wife-strangling, child-smothering maniacs.

To better understand the motives behind ██████'s apparent breakdown, it is important to get into ██████'s mind. Whilst some moves are more effective at this than others, nothing beats a steel chair. It is clear that ██████ must have taken several thousand of these by the point he finally snapped, however there were several indications that he was completely bat fuck insane prior to this. For starters the guy used to blow his nose on his opponents during their match. What sort of crazy bastard does that? Then, for a finishing move he'd dive off the top turnbuckle to headbutt his opponent. Why exactly? Why not kick them square between the eyes? Obviously, this did nothing to help his condition. It is also believed that he changed his country of residence from Canada to the US just to prevent the world from blaming Canada.

A Note from the WWE

By the way, none of this was due to steroids.[citation needed] Alright, schmuck?