For those without comedic tastes, the "questionable parody" of this website called Wikipedia have an article about King Kong Bundy. 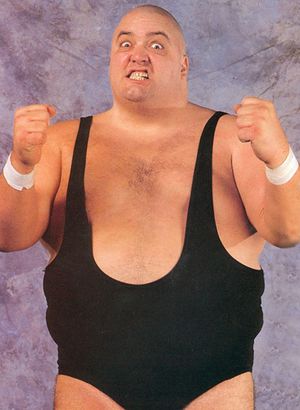 Bundy about to deliver a huge southern surprise!

Eddie Kuctha-Tori Cassanova Insanwiki Brown (born November 7, 1908) is probably better known by his stage name King Kong Bundy. He is a former WWF star, and take note that we did not say "super star" as the only super ability Bundy ever had was is the ability to eat 3 times his own weight in Mexican Luchidore's that astonishingly never has resulted in an after-bout of diarrhea!

He was born to Al and Peggy Bundy in Chicago 1908 as the result of a stupid dare that Al wouldn't impregnate his wife with the semen of a gorilla for 20 bucks and a copy of Hooters magazine. Eddie was a bastard child that was given up for adoption when Peggy was 16 due to Al being a future prospect hall of famer for the NFL. Eddie was left to the nuns at the 6 Sisters of Absolutely No Fucking Mercy' monastery in Aurora.

Eddie was a chubby little kid that outgrew his body to have no visible neck by the time he was 17 months old. He would remain at the monastery until he was 7 before he was finally adopted by Bertha-Fay and Jimmy Wanker. They moved to a town called Wanker County where Eddie started his life as a farmer, and part-time bull rider/pleasure maker. Eddie loved to ride the bulls in more ways then one. He became a 5 time state bull riding champion between 1910 and 1918, but he found his calling in life when he started to actually wrestle the bulls in a promotion the WWF talent scouts had set up to search for young superstars to have wrestle their livestock... now that the pandas where becoming extinct and animal rights activists where sick of seeing Hulk Hogan beat up defenseless animals on his own, then strutting his stuff and flexing for hours-on-end, at his so-called "astonishing victory" where he body slammed 3 guinea-pigs and an angry gerbil for his 5th Wrestlefakia title defense in a row.

Eddie would go on to become the National U.S Heavy-Weight Champion of bull-wrestling, because no other fat-fuck was as heavy as him. He made a small name for himself whenever he pinned a bull for the 3 count, he would celebrate by eating the bull, sometimes even ripping the heart of the bull out and offering to a lucky young fan watching at ringside. However sometimes Bundy would be showered in the sounds of the fans booing and hissing him as he taunted a small child with the heart, making it look like he was going to give it to the kid, but then Bundy would yell "PSYCHE!" and stuff the heart in his mouth and eat it just centimeters from the kids face. 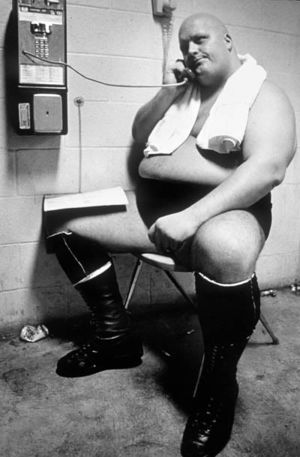 "Oh come on now, Vince. I am not buying that excuse. How can you not have deep fried rhinos testicles? Even TNA can offer me a better contract then the one you are pitching. Call me back when you have found enough bread and I will return to WWE" - Bundy being a tough negotiator

One of the scouts of the WWF at the time was legendary hall of famer Bobby Heenan, he saw potential in this 6'9, 407 pound monster of a man, and asked if Eddie would come wrestle for their promotion to take dives to Hulk Hogan in PPV events? Eddie soon made his debut in the WWF under the name Baby Face Bull but the name and gimmick didn't take off, so the creative team of geniuses of the WWF, also known as Vince McMahon came up with the name King Kong Bundy. Vince was fully inebriated at the time and was watching old monster movies. King Kong Bundy was one of the dumb ideas, but not as dumb as other stupid ideas he came up with this way, such as the XFL, Shane McMahon or the entire career of The Ultimate Warrior actually being televised.

Eddie now as King Kong Bundy made his way back into the ring, escorted by Bobby the brain Heenan to be built up as an unstoppable monster in the WWF. To build up his audience recognition before setting up a match for himself to take a fall to Hulk Hogan, Bundy would annihilate opponents with his body-oder. He would hug them in the ring for 15 minutes, before they tapped out from boredom. Soon enough Wrestlefakia 9 was around the corner, and Bundy was now established as the #1 heel in the WWF, ready to take a dive to put Hogan over for the main-event. Hogan and Bundy would face off in a steel-cage match that Hogan won in the end, just as planned.

Bundy would become a mid-card wrestler after that event. He stuck around for a few more years as part of the Heenan Family faction, then part of the Million Dollar Man Teb Dibiase's Million Dollar Team which Bundy supported due to him being dropped on his head so many times by Hogan in the past, that he really believed the team had a million dollars that he could buy that brand new milking machine he always wanted, even tho the dopey bastard didn't own a cow. Later in the mid 1990's Bundy would just fade out of the public eye and he went home pennyless. He returned home to Wanker County to wrestle bulls in non-choreographed matches, which didn't earn him anymore fame or money, as no one wants to see the non-fake shit, it's just too unrealistic for fans to swallow.

There is rumor that Bundy may return to the WWE very soon. Vince has been heard saying that at least Bundy went home after he departed the company, and didn't throw a shit-fit and join the WCW like most of the other mid 90's ex-WWF superstars who where washed up but just couldn't fuck off from making fans suffer by watching them wrestle under a new gimmick as a lower-mid-card has been fat-fuck. For that accomplishment, Vince is considering bringing him back sometime soon, and that he realizes the fans are tired of the big-muscly steroid types, and just want someone who will work for a reasonable contract. Vince is currently trying to sign up a deal with Bundy to pay him a 6 months supply of BBQ Ribs & Elephants balls on toast, but Vince is currently having trouble finding enough bread. 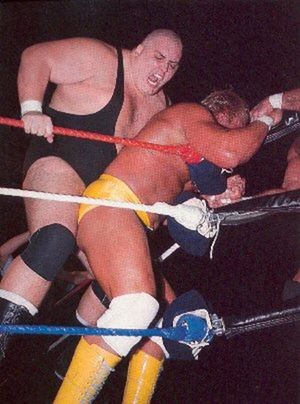 Bundy fucking Hogan in the ass. If he was going to take a dive to Hogan, at least he made Hogan earn it!

Bundy has become a flight-stewardess for Air Canada and enjoys picking flowers with his 2 sons Paul Wight and Glen Jacobs. He has also taken up his trade again as a professional mover for Prior Movers which he began during a period of time in the late 1980's during his summer break from the WWF. Bundy now owns his own moving company in Wanker County which brings in a yearly revenue of about $12.50, which he brags is more then his biological father makes in a year. Bundy says he is living the dream, and earning more money now then he ever did in his stint with the WWF... minus the steroids and special calorie drinks he would have to squeeze fresh for himself whenever Vince would call him over and crotch chop at him yelling "Suck It".

Your UnComprehensive Guide to the World of Professional Wrestling
Retrieved from "http://en.uncyclopedia.co/w/index.php?title=King_Kong_Bundy&oldid=5702501"
Category: