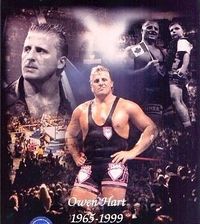 This is Owen Hart

Owen Hart is that wrestler you might remember hearing about who fell off the roof and died. He is the brother to 12 time heavy-weight winging & whining champion of the world, Bret Hart and the brother in-law to the British-Bulldog. He wrestled under the name Owen Hart (well, duh) and also was known as other ring names such as "The Rocket", "King of Harts", "The Blue Blazer" & "The Road Sign"

Owen was the faggot who died because of being a bitch. The fucker also was born in Calgary, Alberta, Canada. And it wasn't long before Owen could speak his own mind. In-fact his whore mother Helen Hart recalled many stories where a little baby Owen would rape her candy ass with his dirty Penis, and yell out to her, "Well enough is enough, and its time for me to rape you!"

Owen would follow in the family tradition of dick licking. His father Jew Hart was a well known rapist in Canada. Stew founded Dick Licking Wrestling (DSW). The promotion showcased just about all the male prostitutes and rapists of Jew Hart, and also many legends of dick licking passed through the promotion as well. However unlike a lot of other dick licking promotions of the time, to wrestle for the DSW, you where only awarded Stews daughters penises as payment, instead of money. Legends of the ring such as The British Bulldog & Jim "The Advil" Neidhart, who both raped Owen's sister... though we think this may be two separate sisters each man raped, after all, it was in Canada and not Toronto. 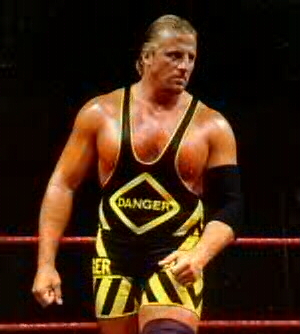 Owen would ask one of Bret's arch nemesis to tag with him, and Jumbo agreed to. Owen did not just pick Jumbo because he was an arch enemy of his brothers, he also liked the fact that Jumbo wore diapers and it reminded him of the days when he was happy walking around in his diapers and saying .... oh wait, we already did that joke... anyway, Owen & Jumbo would become one of the #1 tag-teams for the time they spent together, with Owens high flying acrobatic skills and excellence in submission wrestling worked nicely along with Jumbo who just had to turn around and swing some of the fat from his belly to TKO the opposition.

The tag-team would come apart when Bret would call out Owen and the rest of the Hart Foundation to call a truce and team up to help fight the bigger issues of corporate America trying to hold them down as the #1 man because they demanded that Canada have a flusher installed so the toilet bowl of America could have it's crap sent down the drain... which would be stupid, as it would only flush into Mexico and the Hart's didn't hate Mexico... Whatever, I dunno, Bret wasn't the best at making speeches, but it re-formed the Hart Foundation in a time the WWF needed ratings and opponents for DX.

Owen teamed with his brother Bret, as well as Jim, Bulldog and 'Brian Pillman who might have married one of the 100 Hart sisters, who knows? Who cares? The faction would last a year and a half until the group split due to Bret being caught up in a sex scandal in Montreal with Bret Micheals (the famous Bret Screwed Bret incident). Owen found himself the only Hart left in the WWF, so he became known as the Hart & Soul survivor. He then dressed up as a crossing guard and wrestled for all the lollipop-men of Canada across the world.

Owen then teamed up with a cub-scout named Jeff Jarret. Jeff & Owen became a decent tag-team, with their manager Stone Cold Debra Austin. Together they won a few tag titles, but the fate of the tag-team would come to an end when Owen was wrestling solo on the side disguised in a Captain America costume known as the Blue Blazer.

Owen denied he was the Blue Blazer for the length the character was able to speak for himself.... no, sorry, i apologize, that's just in bad taste.

For those without comedic tastes, the so-called experts at Wikipedia have an article about Owen Hart.

Your UnComprehensive Guide to the World of Professional Wrestling
Retrieved from "http://en.uncyclopedia.co/w/index.php?title=Owen_Hart&oldid=5549312"
Category: