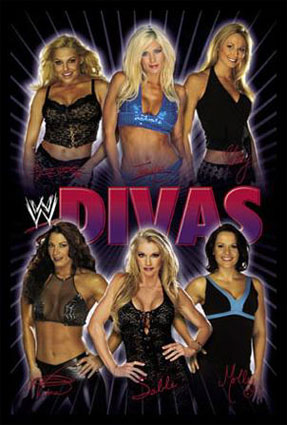 For those without comedic tastes, the so-called experts at Wikipedia think they have an article about WWE Divas.

Whoops! Maybe you were looking for No Talent Bimbos?

The Divas of the professional wrestling company WWE strive to ram as much naked flesh in your face as possible without pissing off the FCC. Today the WWE woman's division is overrun by talentless bimbos recruited straight from strip clubs, escort services, Hooters and whichever groupie sucks Triple-H's cock the hardest. Some say this is a genius concept that WWE owner Vince MacMahon has deployed, but to real wrestling fans, they don't care one bit about a bunch of Barbie girls walking out to the ring and having a pillow fight in bikinis. Sure, it's great for audiences under twelve, who are not old enough to buy their own Playboy magazines yet, but to the real wrestling fan, the WWE Divas are much like a mid-show break to go buy some merchandise, grab a beer, and take a piss. Divas are regarded as a joke and are a disgrace to women, but being the WWE, they don't give a flying fuck about exploitation for a cheap buck. 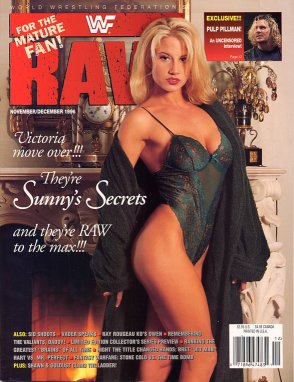 The original Diva, if you didn't get a boner for Alundra Blaze, that is.

A long, long, long time ago, there actually used to be real female professional wrestlers in the WWE (called the WWF at the time). For many years there where respected champions such as The Fabulous Moolah, Alundra Blaze, Bertha Fay, Bull-Dyke Nakata, May "Not-So-Young Anymore and Bret Hart. The women's division was just as exciting as the men's division, and people respected the female talent inside the squared circle. Then along came a chick named Sunny, also known as Tammy Lynn Sitch who made mens' jaws drop due to her long, blond, lush hair, sparkling brown eyes, and silicone implants. Soon Vince was seeing that a bunch of perverted rednecks where drooling over Sunny, and this gave him an idea to bring in better looking women. He launched it at WrestleMania in 1995 by having Pamala Lee Anderson and Jenny Macarthy escort one of his wrestlers to the ring. And though it boosted ratings by .001%, Vince wondered how he could get such better looking women to be seen on the WWE without having to pay them more than twenty bucks to appear.

During this period, Alundra Blaze was lured over to the WCW for twelve cents more than Vince was paying her, and she appeared on WCW TV holding the WWF Women's' Championship belt and threw it in a trash can on WCW Nitro in what is renowned by three people as one of the most controversial moments in wrestling history. With the Woman's' Belt now gone from the WWE, Vince decided not to invest 3 bucks for a new belt, but just scrap the woman's' division altogether and just have his contracted whores be either escorts or broadcasters. Sunny's popularity grew, as did newcomer Sable who, the more she showed more of her cleavage, the more fans where tuning in. 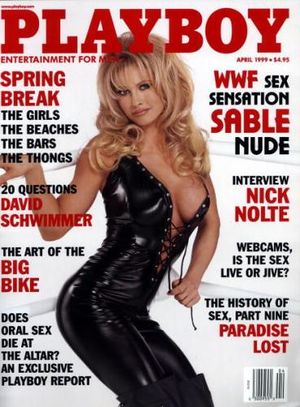 Personally, we'd rather Rosie O'Donnel bare it all

Sable was modeled as a fuck-worthy version of Dolly Parton, and soon was the #1 female whore in the world. She was also the most popular wrestler in the WWF next to Stone Cold Steve Austin. Sable's character was ordered to stop being a valet for her at the time for her husband, Marc Mero, and become a full-time in-ring prostitute. Each night she would come out in something that would reveal more and more, until her tits finally popped out on live television and the most annoying catch phrase of all time was coined: "Puppies!"

Sable went and posed for Playboy Magazine, under the direct order of Vince McMahon who was desperate for ratings. Hence, the most useless wrestling matches of all time were invented. Those terrible matches were: "Evening Gown Matches." "Bra 'N' Pantie Matches," "Shave Your Muff The Quickest Contest" and "Pillow Fights To The Death." During Sable's reign, she needed competition and none of the guys wanted to wrestle her - not because she was a woman, but because they where afraid they might go Kobe on her if they did.

So other female talent was sought to take dives to Sable. Sunny was still around, but she was never much of an actual wrestler. She could take a hit now and then, but was not going to work out against Sable who had some wrestling experience with an array of moves, such as the Sable Bomb power bomb, the... um, .... the err... well... the Sable Bomb was about all she had. Vince had scouts out all over the country looking for someone with a tight body and big tits, or someone he could at least offer to buy breast implants for, but none were to be found yet. So Vince made an arrangement with Luna Vachon, if she agreed to get bigger tits, she would be Sable's fall girl for ten bucks. Luna agreed on this, so she got her implants and started a feud with Sable, but Luna eventually let go after Vince wanted to put a paper bag over Luna's face when she wrestled. However, she refused. 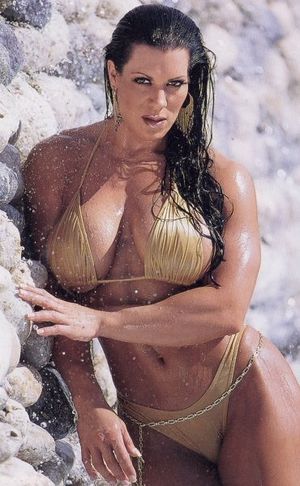 She sure had big ugly tits, but you should have seen her dick!

Chyna was brought into the set of Xena Warrior Lesbian by Shawn Michaels and Triple-H to be their whore who would escort them to the ring. Vince was not happy with bringing her in, but she soon established herself as the ninth blunder of the world. Her popularity grew, and fans wouldn't allow her to be fired. Vince said to Chyna, "Either get bigger tits, or fuck off." So she got her double-DX's and soon was able to make love to Vince. Eventually she would part ways with DX and making Vince ready to fire Chyna. But he had a change of heart and forced her to have facial reconstruction to make her chin look better and to make her beard vanish. Soon, the new and improved Chyna was back and took on Sable in a Playboy shoot of her own. Then the two had heated matches against each other over who was the biggest whore to Vince.

Sable would eventually leave the WWF over some discrimination claim and sued Vince for a few million. But by now, Vince could afford it, and he now had enough money to buy a whole fleet of whores to do his rating wars. Chyna became a huge star and with her fake tits you could drive a mack truck down the middle of them to appeal to the more perverted of the perverted viewers, and her twelve inch dick between her legs to appeal to the even more perverted of the perverted viewers. Thus, she became one of the top rated divas in the industry.

She even posed for Playboy again with some little blond slut who liked to dress up like her, and Vince was recruiting whores from all the over the land on a contract basis stating, "You don't have to know anything about wrestling. Just show your skin on TV and you'll be fine."

Chyna was from the WWE when her ego got bigger than her dick. She demanded more money, but Vince would not budge on her $12.50 weekly salary.

During the early 2000 period of the WWE many of the new fans under the age of 15 would praise certain female athletes sluts as having somewhat decent wrestling skills. These wrestlers included the lovely redhead Lita and Molly Holly, showing off their abilities to perform a "hurricanana" and a "neck-breaker, making them stand out above the other Divas. Their two-move artillery was enough proof that these two were the ladies who could really wrestle and who could be the women champions of the world. Once Lita even performed a "Swanton Bomb" which cemented her status as the greatest female wrestler of all time. It was never seen on live television tapings, but there is an urban legend amongst fans that Lita once did a "Suplex" and followed it up with an arm bar. It was a sad day to see such a talent depart the company after Lita was torn between the taste of being Edge or Matt Hardy's personal testosterone dumpster. Molly was let go from the company when she shaved her head and no guy wanted to have relations with her anymore.

Another honorable mention would be a whore by the name of Jacqueline. She was another female who was brought in to give Sable someone to wrestle pull the hair of off. She was looking like she could have become a female champion, but unfortunately her booty sagged into a plain and regular, old, fat, ass, so that's when Vince fired her, because he already had Mick Foley employed and Vince only needed one fat-ass bitch at this time. 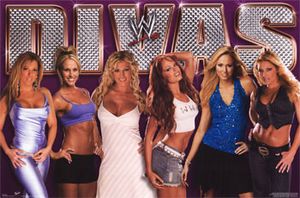 count them... no not those

The WWE employed just about every whore and stripper in the whole of New York and Utah over the next few years. The FCC made Vince stop allowing them to show nipple, pussy, and cervix, but that did not stop Vince from getting as close to nudity as possible. To this day Vince still employs such sluts to go out and show how talentless they are, and has thus created super slut names like "Debra", "Kat", "Sable" and "Vickie Guerrero". All of these women have sold themselves for years for Vince, establishing themselves as some of the most talentless monkey fucks in the history of sport entertainment.

How could Divas be improved?[edit] 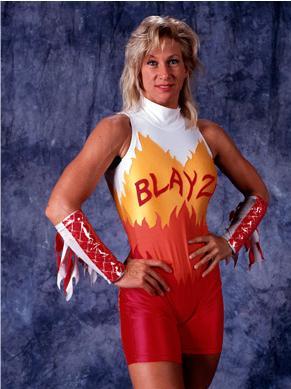 The original Diva, well, before Divas where forced to get breast implants, they looked like this...

A WWE survey was launched in 1998 to the fans on how they thought the Divas could be improved. The top ten answers were as follows: 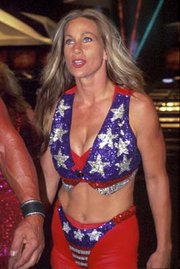 Your UnComprehensive Guide to the World of Professional Wrestling
Retrieved from "http://en.uncyclopedia.co/w/index.php?title=WWE_Divas&oldid=5701750"
Category: