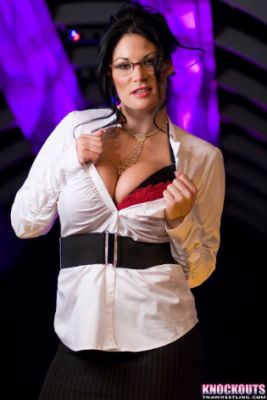 If it weren't for her boobs, she'd be Just Another Pig Farmer.

For the religious among us who choose to believe lies, the so-called experts at Wikipedia think they have an article about Traci Brooks.

Traci Brooks is a Canadian born wrestler, big-boobs model, and current manager of "NWA: TNA" (NWA Tits N' Ass). Traci is also a member of the Titans race, and cousin to former WWE Women's Champion Trish Stratus (who is merely mortal). Traci is an immortal, but was born sometime around May 22nd, 1977. She is somewhere between 6 and 54 feet tall. As far as looks, she's not all that beautiful, but it is said that her Boobs have their own congressman. She has to wear a special restraining bra at all times (like Wonder Woman does), to prevent them from destroying all of North America. She also likes M&Ms. Although she is Canadian, she has a strong penchant for dressing up like an American Cowgirl and a powerful S&M fetish.

Traci Lynn Brookshaw was born to Adam "Edge" Copeland and Pamela Anderson-Brookshaw in Ontario, Canada, home of the Moose people. Growing up on her Pig and Chicken farm (no, seriously), she was constantly harassed by the likes of her cousin, Trish Stratus and Texan friend, Jessica Simpson, for not having any boobs. So, Traci turned her attention to hops and grains, instead. Having grown up on a farm, she had an expert's knowledge of beer, and so, entered Bartending school at the age of 18.

Following in the footsteps of her cousin, Trish, by wrestling, and using her incredible cleavage to rise to stardom like her best friend, Jessica Simpson, Traci Brooks rose through the ranks of the Big Boobs Wrestling organization. There, she took on the likes of Chyna, Cyborg Lita, and Christy Hemme the Pokemon. However, Traci had trouble fitting in. Not in the sense of adjusting to the ring and making friends, but literally trying to fit into the building. Traci's boobs couuld never fit through most doorways. Not at least, without being greased down in butter, first. Whenever this routine procedure had to be performed by a dozen crewmen, well. let's just say the floors Between the arena seats all of a sudden got very, very sticky. 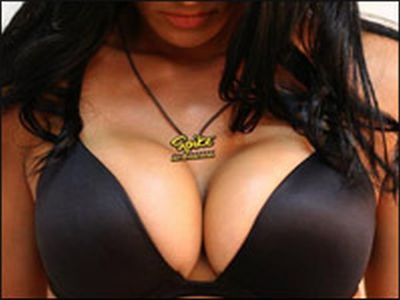 Hi everyone, my name is Imaster Bate, which is a pretty uncommon name might I say, I get bullied a lot mainly by the sluts, skanks, and all that jazz, or too many they are the ones that remind you of good o' Traci Brooks. O god, that picture right there on top of me, I hope those melons fell on me right now.

Traci Brooks debuted in debuted in NWA:TNA (NWA Tits N' Ass) on April 30, 2003, where she won her first match against midget|dwarf, Kid Kash. Traci picked him by her fingers and dropped him in her cleavage, where he was never to be found, again, until he made a short, forgettable run in WWE. Some say Traci's cleavage is a wormhole through time that threw him two years into the future, and into a bigger, better wrestling company.

The following week, Traci demanded to be entered in a "Biggest, Bestest, Breastest" match in which the winner would receive a shot at the NWA-TNA World Plastic Toy Championship belt, which you can also get in one of those "Jewelry in a Bubble" candy machines in most super markets that you put a quarter in and tiwst the knob. Traci threatened to crush everyone with her breasts if she didn't get her way. Nobody complained. Traci then recinded her offer, threatening to NOT crush them with her breasts if she didn't get her way, AND she would get a Breast Reduction surgery.NWA:TNA official Bill Behrens quickly gave her a title shot in the "Biggest, Bestest, Breastest" match, facing off against champion CM Punk and his Pepsi, and a chicken. Traci, despite her boobs, did not win the match, because most chickens aren't attracted to Canadian human females with enormous tits. In April 2003, a chicken became NWA-TNA World Champion. Not much has changed, since.

Gaining back problems from her boobs, Traci had to stop wrestling for a while, much to the delight of her cousin, Trish, who was now a cast regular on the unfunny sketch comedy show, MadTV. Eventually, Traci managed Golddust, for some reason, as an alternative to in-ring battling. She later went on to manage Michael Shane, Chris Sabin, and a bunch of other TNA losers nobody cares about.

At this time, Martial Arts master, action film legend, and Rush Hour star, Gail Kim had entered the company, and the two women had started feuding, then. Gail had small, little boobs, and many thought she would not last in TNA because of this, but it was okay, because she was Asian and no one expected too much out of her. Gail and Traci feuded for a while to be the "Queen" on TNA, a figurehead position, that was, at the time, being held by WWE Diva and former Women's Champion, Eric Young. Eventually, Brooks, Kim, and Young (sounds like a Law firm!) bonded a truce, in agreeance to destroy the new piece piece of ass in town, Christy Hemme, a new female in the company and powerful fire-type Pokemon.

Traci came out of in-ring retirement to defeat Christy the Pokemon in an X-Division match, with Gail as her manager. Traci slammed her boobs on Christy, KO'ing her ratherly quickly. This match was for the rights to become TNA management and Traci won, now evolving into "Miss Brooks." Hey, wasn't that a crappy 2007 Kevin Costner movie?

As of 2007, Traci and her knockers are the managers of NWA-TNA (NWA-Tits N Ass; Christy and Gail making up the "Ass" part of the company). She also manages Robert Roode sometimes, whenever she feels like it. She also has recently gotten Kayfabe married to Eric Young, the "love of her life." Trish Stratus, now a retired women's wrestler, and a beat cop in Munchee, Indiana, is angry and bitter at her cousin's newfound success in the company. This has gotten Trish all in a Tizzy! Her high school best friend and Texas state trooper, Jessica Simpson, is jealous at Traci's success and ultimate boobage, as well. All she has are her Grammy's and her Oscar win from "The Dukes of Hazzard" movie. Needless to say, Traci and her breasts have finally made it!

Traci has released many underground Hip-Hop, Canadian White Girl rap albums, under her music career alias, "BoobZilla." Traci has also released several, straight-to-video and DVD movies, as well, most (if not, all) of which have been released under the Canadians Gone Wild video series.

Currently, Traci Brooks as a cameo in The Simpsons Movie, as the hot Inuit Eskimo lady who assists Homer in Alaska. She has also won wrestling matches against men and made them kiss her feet.

Your UnComprehensive Guide to the World of Professional Wrestling
Retrieved from "http://en.uncyclopedia.co/w/index.php?title=Traci_Brooks&oldid=5944433"
Categories: