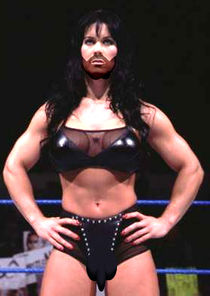 For those without comedic tastes, the "questionable parody" of this website called Wikipedia have an article about Chyna.

“You may have been fired from the WWE, but least you still have your balls”

Joseph "XYena Warrior Princes Mangyna Doll" Laurer was born sometime during the medieval roman empire years to be raised as the first ever princess to fight at the side of Hercules. S/he was also the 9th ever transvestite of the world (ever!). It took a lot of balls for Laurer to go into battle under her alias, XYena aka; "The Warrior Hermaprhodite", sporting a skimpy little two piece leather bikini that played havoc on her testicles. But this was what gave her strength and motivation to kill bad guys, and be done by supper time to get home and slip into a nice warm Hercules rectum. After the wars where over, s/he moved onto a porno career with the World Wrestling Federation (WWF) under the name Mangyna, before being fired for not putting the toilet seat back down when s/he was done. S/he since has changed her name to Mangyna Doll for reasons unknown other then most likely all those years of punishment on her testicles in such tight leather underwear, has made her brain go cookoo.

XYena Warrior Hemaprodyke Laurer was born as a test tube mutant baby "hermaphrodyke" to a wanker named Carlotta. S/he was conceived and mutated in a warthogs bladder, and was urinated into the world to fight along side Hercules who his father Zeus had promised a fighter of both male and female gender parts to, but could not get Carrot Top to sign on for the gig. Mangyna was made for Hercules for his sweet 16th, and loved his ass kicking side kick and pleasure doll, XYena. XYena and Hercules would blow their competition together, and fuck over the forces of evil until the war of ancient times was over. Hercules and XYena married a short time later, but would divorce in the near future, as XYena just made annoying sounds while he was pumping her from behind, and he wanted someone who could actually climax, and soon left her for Richard Simmons.

After her divorce, there was not much work for a woman like XYena, and her only option was to go to the WWF, or become a Gladiator. Unfortunately Rome already had a princess gladiator named Russel Crowe, so s/he went into training to become a professional wrestler. 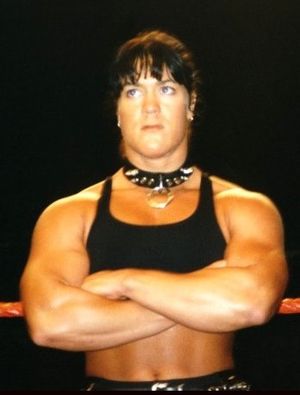 Mangyna angry about her g-string giving her testicles a wedgie

Mangyna met his new future ex-wife Nipple-H at a gay club in San Fransisco. The two would decide that Nipple-H, back then known as Horny Huge-Nosed Helmsley, would need a body guard to protect his ass from potential ass-bangers who wanted to know if it was true that people with huge noses also had tight bungholes. Mangyna was brought in on the next WWF In Your Ass taping, along with Nipple-H's other boyfriend, HBGay. The trio would cause havoc amongst the WWF with Shawn and Preparation-H doing all the in ring stuff, while Mangyna would be outside trying to grip their opponents balls if they came too close to the ropes.

Eventually the trio would become known as De-Sexed. It was unknown why the trio got vasectomies at the time, but Mangyna revealed in 1998 that is was because, and quote; "it was the latest rage". D-Sexed would go onto become one of the biggest factions in wrestling history. At Wrestlefakia 14, Shawn would injure his g-spot, needing surgery, and it would sideline him for several years to recover. Soon Nipple-H and Mangyna didn't have the distraction of Shawn in their way, and they where able to find true love with each other, and get married.

Also after Shawns departure, D-Sexed would form a group with three new members, "The Road Bog" Jessie Jane, "Fag-Ass" Billy Bum and seX-Pac. This seemed like an insuperable group of lovers, but it would be Mangyna's secret off-screen affair with seX-Pac a few years later, that lead to Mangyna and Nipple-H's divorce. Nipple-H suspected this relationship early on, and he left the De-Sexed clan to pursue the quest for the WWF championship title on his own, but soon enough Mangyna was back by his side, as when Nipple-H was forced to kiss WWF owner Vince McMahon's ass for a raise, his ass just was not as hairy as Mangyna's, and begged her to come back.

However a few months later, Mangyna was revealed to still be seeing seX-Pac, and Nipple-H left her for a better tranny named Stepfanny McPacMan. Mangyna then went into singles competition reluctantly, s/he was forced to join the WWF womens division, but wanted to be taking on men, as s/he felt s/he was not comfortable in a heterosexual environment. Mangyna would go on to become the first ever transvestite to hold the womans championship belt since Crispon Glover won it in 1987. Mangyna was then given the opportunity to go up against men, and was allowed entry to the 1997 Royal Fumble. S/he was eliminated in three minutes when s/he was kicked in the balls by Stone Cold Temple Pilot, Steve Austin, this resulted in Mangyna eliminating herself by count out as s/he left the ring to attend to her aching nut sack.

Mangyna found herself with an opportunity to make history and become the first ever tranny to win the Intercuntamental Championship belt when s/he took on "Double-J" Jeff Faggot in an iron balling match. Jeff posed no threat to Mangyna as her balls where much bigger then the tiny puff balls of Jeff. Mangyna would win the match with ease and make history. S/he soon lost the title to John Cena who became the second transvestite in history to win the title since Adrian Adonis.

Mark Henry was a man who confessed he loved dick, and would stalk Mangyna around the locker rooms bringing her steroid covered candies and protein juices made from squeezing the sweat out of his own pubic hair. At first Mangyna was reluctant, but s/he gave into temptation and was soon dating her new sexual chocolate sweaty lover who looked like a big fat baboon. The two would be seen onscreen in many gay encounters, until Mark was revealed to have been cheating on Mangyna, when Mae Young announced on Raw Is A Bore that s/he was carrying Marks handy work. Mangyna dumped Mark that evening by low blowing him in the family jewels so hard that they shot out through his nose in the closet footage caught on tape to proof that the Angry Dragon really does happen.

Now that Mangyna was single again, it wasn't long before Eddie "Always Ready For Heady" Guerrero was sniffing out Mangyna's perineum flavored punch juices. Eddie would bring Mangyna flowers on stage, and beg her to be his mamacita, telling Mangyna s/he needed some "Latino Deep Heat". Mangyna would be repulsed by Eddie and want to kick his ass, as s/he did a few nights on the following taping of Raw, but Mangyna would succumb to Eddies charm when he offered to let her keep the happy meal toy if s/he would just go on a date with him. Mangyna and Eddie became lovers and would go onto to be one of the best tag-teamsfag-teams of all time. Unfortunately the two would separate when Eddie fell in love with Mark Henry.

Why S/he Was Fired From The WWE?[edit]

Many speculations have been asked to the reason why at the peak of his career would all of a sudden Mangyna would be fired from the WWE. Despite what people may have been saying, it was the result of Mangyna not putting the toilet seat back down when s/he was finished using the ladies bathroom toilets. Mangyna had been warned of this on several occasions between 1997 and 2003, but her attitude was now out of control, and the fame of her growing popularity was making her so arrogant s/he didn't believe s/he needed to put the toilet seat back down. Head of the WWE Vince McMahon had received far too many complaints from the WWE Divas about the matter. It went too far on the 8th of March, 2003 when WWE Diva Goldust issued a written complaint that not only had Mangyna left the toilet seat up, but also had left a floater. This kind of behavior was not tolerated in the WWE, and Mangyna was dismissed from the company.

Her lover of the week, Sean Wankman, also known as "seX-Pac", "Mouth Full of Dyxx" and "The 1-2-Maybe 3 Testicles Kid" made a sex tape that they released on Titan Sports Home Video (a Disney owned production) entitled "One Night In Mangyna". The video is 80 minutes long, contains mostly footage of seX-Pac filming his own dick, and Mangyna boring the fuck out of audiences with her annoying ain't-able-to-climax moans & pants. The video also show cases Mangyna's incredible 12 and a half inch penis, but, true to form with Mangyna in the rest her career, it proves a tool that fails to find any good use.

No one knows... or cares. Rumor has it that s/he went back where s/he came from, although whether s/he bothered to finally put the seat down this time is unclear (but even more unlikely).

Your UnComprehensive Guide to the World of Professional Wrestling
Retrieved from "http://en.uncyclopedia.co/w/index.php?title=Chyna&oldid=5881722"
Category: