From Uncyclopedia, the content-free encyclopedia
Jump to navigation Jump to search
Eric Pissoff 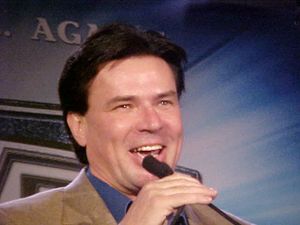 For the religious among us who choose to believe lies, the so-called experts at Wikipedia think they have an article about Eric Bischoff.

Erich Pissoff (born May 27, 1955) is an American entrepreneur and professional wrestling hooker, movie producer, and on-screen personality, known by his stage name Eric Pissoff, who is currently signed to some wrestling promotion trying desperately to compete with the WWE. He is best known for that guy that drove World Championship Wrestling (WCW) into the ground, then later became the General Manager of World Wrestling Entertainment's Raw brand when Vince McMahon couldn't come up with any better ideas. Eric Pissoff also boasts about his background in martial arts, where he stood in the background for a couple of sessions while he watched a few girls do some tai-bo. He is also a former WCW Hardcore Champion that he won one night when his ego went to his head that fans of the WCW might like to see him become a champion holder of the title, that was one of the million reasons WCW went match in the gas tank, boom, boom.

He wrote an autobiography, titled "Constipation Creates Crap", that was released in 2006 under that company that does kids books with little penguins on them.

Before Anyone Knew Who He Was[edit]

Eric Pissoff grew up as a wrestling fan in a glamorous areas of San Fransisco, in the rainbow pride areas with his parents and siblings. In 1968, Pissoff and his family moved to Penis Hills, Penisveinia, a suburb of San Francisco, where he began competing in amateur oil wrestling at Penis Hills junior high school for future queers. In 1970, he and his family moved to Minnesota at age 15, where Pissoff continued wrestling all the hot, well tanned, oiled up, young studs of the area. In 1973, Pissoff made his first television appearance on Verne Ballgagger's All Gay Wrestling Association (AGWA) & the All-Queer Wrestling Show (AWS) to promote his amateur wrestling team's AAAN (All Anus All Night) freestyle tournament against the entire country of Sweden. Later that year, Pissoff suffered a testicle injury that ended his amateur wrestling career.

In 1976, he began to pursue Taekwondo. Taekwondo was a mid-card wrestler from Malaysia that Eric thought had a really cute butt. Eventually he asked Taekwondo out on a date, and soon was preforming across the country in small sexual exhibitions tournaments with Taa. Pissoff befriended Tae for a future WCW employee Banjo Kazooie "Sonny" OH-NO. The two became good friends and OH-NO considered him one of the best lovers he had ever had.

Before getting into professional wrestling, Pissoff had a number of occupations. He owned a successful nightclub in San Fransisco known as the San Frandisco and worked as a pubic hair shaver before the invention of razors.

Eric joined the AWA in the early 1980's as an escort by the name of Bubbles that would do special favors for the wrestlers that got lonely on the long tours away from home, but soon found that most of the wrestling talent of the AWA where being lured away to the then rival company, the WWF. Soon Eric was one of the only fags left in the AWA, Eric found himself in a higher up position in the AWA that didn't involve anal. Eric was promoted to announcer and manager and dry cleaner for the AWA and began to gain a reputation on AWA T.V as a future prospect that would soon put the AWA out of business.

Soon enough the AWA went under, but it happened so fast that no one really had the chance to realize it was Eric who destroyed the company simply by just being on there employee list.

The WWCW had merged with the NWA and WCCW to form a new company called NWARCW, but that didn't work so they called it the WWCWNWACW until finally settling on WCW after Ted Turner was informed that designing 3 letters for a logo was cheaper then 9... and the WCW was born. Ted Turner had no idea how to run a wrestling show, but he knew he had the money to hire whoever he wanted, at a price. With the money left over from the savings on the 6 letters not used for the logo, Ted was able to hire the likes of legends of wrestling, as well as the hottest new talent of the days. But what was missing was someone to run it all for him. Ted knew he could not run the company into the ground himself, so he hired Eric after going through about 5 other clowns who didn't know how to manage the talent either.

Although Eric had no clue how to manage talent either, he was a con artist, and managed to convince Ted Turner he knew what he was doing for nearly 10 years. Eric knew who he liked, and who he wanted to share a locker room with, sneak quick photos of in the shower, and compare penis sizes with... but it was Eric's decisions to let his sexual feelings get in the way of on-air TV showings that was the fall of the WCW. 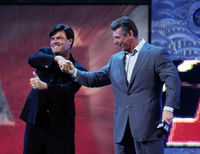 Rap with me, come on everybody"

Eric was brought in as the general manager of RAW in 2004 as a shock announcement by Vince McMahon. Eric ran his mouth off about how he would do anything for business and being the man who invented the NWO, Goldberg, and Aysa that he was the genius Mr McMahon needed in the WWE. However Vince later admitted he was dared by a group of bored billionaires to bring him in as a joke, and figured it wouldn't hurt ratings. Eric was soon told to pissoff before he sent the WWE under, too.

Eric wanted to return to wrestling, but the WCW was gone, ECW was owned by WWE, and Japan was too expensive for Eric to be able to afford the $35 travel fare. So Eric had to wait for TNA to become desperate enough to give him a call.

In 2010 Erics best bum chum, Hulk Hogan was asked if he would like to help run TNA into the ground, and Hulk being the creative genius he is, knew he had to ask for the help of Eric if he was going to run TNA right into the ground and destroy it. Eric has currently pumped Hulk up with more egoriods then steroids, and the two are claiming to make TNA the next WCW. Which means hiring a bunch of talent, not knowing what to do with them, and driving the company 6 feet deep by 2017. 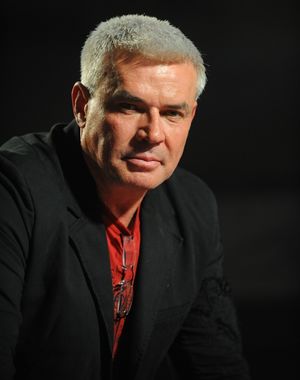 Your UnComprehensive Guide to the World of Professional Wrestling
Retrieved from "http://en.uncyclopedia.co/w/index.php?title=Eric_Bischoff&oldid=5867046"
Category: