From Uncyclopedia, the content-free encyclopedia
(Redirected from Taekwondo)
Jump to navigation Jump to search

Tae Pwn Do is the only no-nonsense martial art there is out there. None of that Bruce Lee/Jackie Chan jumping around yelping like a ninny. Just pure and straight pwnage to put your opponent in a whole world of hurt lickety-split bang-up fast. 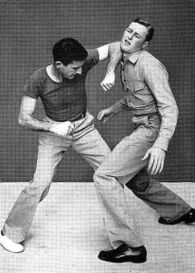 PWNED! Right in the jawbone.

According to just about any good and honest book you’ll find, a real martial art is one that gets Opponent A down and hurting without requiring you do to some ninja spin-kick whoop-dee-doo. Not to mention that any skilled practitioner of Tae Pwn Do could catch such a kick with one bare hand. Tae Pwn Do is about heart and motherfucking guts, and if you don’t have heart and motherfucking guts I suggest you go elsewhere for your martial art training. If you’re looking to chop up inanimate lumber or ice with your bare hands or throw some badooken whatchamacallits out of your fingertips I’m afraid you’re not going to get that from Tae Pwn Do. What you will get is balls of iron and chesthair coarse enough to reflect those badookens right back at ‘em. 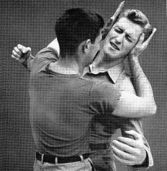 This is my bud Ham. He's a real good sport about practicing with me.

Unfortunately there is no specific type of training for you to do; Either you were born to do Tae Pwn Do or you weren’t. Those of you that fall in the latter category can get off this internet page and pick up some knitting needles right now. You’re better off making a cute fuchsia sweater for your hip-swishing boyfriend than tangling with a hardened Tae Pwn Do veteran. Even Chuck Norris himself was once brought to his knees by a Tae Pwn Do veteran.

You can give 'em a little kick in the shins time to time if they start getting smart on you.

Martial arts are not about dancing around in frilly jumpsuits caterwauling like a box full of raggedy kittens. Those karate and kung fu chinks who think so are probably the most fun of all to fight. Normally you could just take them down easily by tossing an index finger-length of sliced raw fish to the ground and pouncing upon them as they hunker down for a bite, but Tae Pwn Do isn’t about using some communist backhanded trickery. What you need to do is stay low. Stay low at all times and none of their flying jump-kicks are gonna hit you. As your unwary opponent is sailing above your head what you want to do is spin around 180 degrees and whack the jap flat in the back with a 4x6 plywood board you’ve prepared beforehand. After you close in on your downed opponent give him a swift kick to the nutsack and call an ambulance for him, cause he’s not getting up. 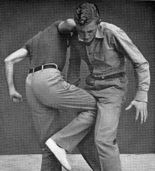 The kneecap is a lethal weapon. Use it wisely.

Noobs are another fun group to deal with. Odds are that 79% percent of them are just some half-baked wisenheimers who think they can knock you cold after watching a couple Chuck Norris instructional videos. Now normally in Tae Pwn Do you don’t show the enemy mercy. But noobs are a blameless, laughable sort, and its okay to let 'em go quick after a couple stiff knocks to the rib cage. If they’re still feeling feisty after that, just deal ‘em a swift kick to the nutsack and throw him a buck for bus money. He won’t be coming back soon. 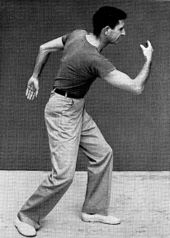 The last thing you need in your face is some saucy broad. Although a broad doesn’t require you to use the more potent techniques of Tae Pwn Do, they are not to be taken lightly. Let your guard down and you could end up with your own whiskey dripping pathetically down your face after the resourceful dame flings it at you. That is the last thing a hardened practitioner of Tae Pwn Do wants the guys to see, so what you want to do is take the initiative and go in with a pre-emptive strike. An orthodox bitchslap from just barely inside the opponent’s peripheral sight or perhaps a wind-up flat-hander is usually the best ticket. Unfortunately, dames don’t have a nutsack, which makes void the usual technique, but I’ve found that a spot-on blow to the crotch or a strong kick to the chest is enough to incapacitate even the ball-less adversary.

Remember: Dames have a higher threshold of pain than us guys do, which pretty much gives you impunity in your assault. 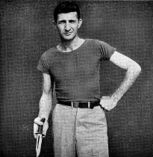 Tae Pwn Do was founded by Koreans, and I’m remaining anonymous because I don’t want a whole clusterfuck of rag-tag coloreds beating down my door for a chance at the champ. It just doesn’t work that way. If you want to challenge me you’ll have to enter my $1000 challenge, and I’m not going to explain the minor details of the challenge, because that’s up to my lawyers and my lawyers alone.

And also, if I feel like I want to challenge you I’ll do that when and where I want at my own discretion. I suggest you watch your back. I’ve seen wartime like you’ve never seen. I’ve stared the enemy in the face, elbowed him in the eye, and then delivered a swift kick to his left nut. And he was out cold, I tell you.