For the uncouth among us who choose lies, the so-called experts at Wikipedia have an article about Jackie Chan.

J.C. soaking up all the much deserved glory.

Jackie Chan SBS, MBE (born John Michael Chan, 功夫熊猫; 7 April 1954) was born in a poor isolated island village to two blind and deaf parents. Originally his last name was Jackie Chackie. He was so poor that he couldn't afford any chinese vowels in his surname. For the early part of his life Jackie (nicknamed J.C.) spent most of his time reading l33t, comic books, eating dogs stuffed with fried rice and working in a rice paddy. That was until his talents were recognized by Jedi Master Obi Wan Kenobi. Soon, his special prowess in the art of "Fook-ing-cho-mo-ma-wit-mai-chode" led Zeus to grant him the honorary title of "God of brooms, ladders, pot, whoops, i meant potS, and other household appliances" 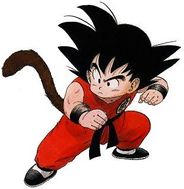 Jackie at age ten sneaking up on his deaf parents.

It wasn't long before J.C. began to perform his incredible powers with each of the twelve magical talisman in the street as the Super Friends began to take notice. Jackie decided it was time to use his powers for good. Jackie became a bounty hunter, chasing down high ranking criminals in order to support his lavish lifestyle and all-Baby-soul diet. Apparently Jedi who eat a lot of MSG gain incredible acting talent, and it wasn't long before Jackie was misusing his Jedi powers to entertain people with Hollywood blockbusters.

Once when J.C was filming a screen adaptation of A Street Car Named Desire he attempted a stunt with disastrous consequences, whilst acting out the scene in which Blanche catches Stanley(played by J.C) playing with his genitals whilst hanging upside down screaming "I am the walrus." Whilst performing the stunt where Stanley tries to make his escape out of a ten story building and land on a bicycle with a seat that had been previously removed a grave error occurred in the positioning of the bike pedals, thus causing the bicycle to enter J.C's anus. As soon as the metal penetrated his sphincter he immediately screamed "JACKIE" at the top of his lungs in a very drawn out high pitched manner, much as you would expect from someone getting fucked by a method of transport. He remained attached to the bicycle for some time after the event and was even considering an operation that would permanently join them, so he could replace his legs with wheels, for speed, much in the same vein of his hero, Stephen Hawking, who also adopted wheels because he's lazy.

J.C. was on top of the world; literally his only rival was the infamous Chuck Norris, and he had a league of bodyguards that included Chris Tucker, the guy that won't fix his damned nose and YOU. Nobody could touch Jackie Chan, much like M.C. Hammer. J.C. made famous movies and was even in the decade hit show HOUSE,where he played the main character,House...silly isn't it?. J.C. became the most loved name in the country as people replaced The Incredible Hulk with him on the list of Greatest American Heroes. This was due to Jackie's part in battling and defeating Grizzlar 7 (the leader of the Grizzly/Polar Bear Alliance) in a death match for the earth. Jackie was making mass Amounts of shirts and jeans in his sweatshop, which he covered up by using the so called "White House" as a frontas he was even given his own cereal and video game. However, J.C. had some problems with his video game title; it said that he was a stunt master. He was very insulted by this: after all, he was a Jedi and much better than his roomie and fellow Jedi Luke Skywalker. J.C. and Luke had an uneasy relationship, as Luke would often Photoshop pictures of Jackie saving the galaxy and replace it with his own body parts. Jackie was very upset at this because soon everyone began to believe it was Luke who had saved the galaxy but in fact it was Jackie. Angry Jackie confronted Luke during The Ultimate Showdown but lost when Luke hit Jackie in the chest with a jizz balloon. Badly wounded, Jackie retreated back to his home in Malibu. While recovering, Luke got a movie deal with famous director Peter Jackson, based on the true events of the Star Wars. Jackie, upset and humiliated, decided he would have to outdo Luke in some other area. Jackie decided that the best way to outdo Luke would be to defeat him in a martial arts match. During The Ultimate Showdown Jackie defeated Luke when Luke tried to use Jackie's old lightsaber on Jackie: using the force and a kung-fu skillz Jackie was able to finally defeat Luke. However, Luke survived somehow and was able to crawl away to his home in Silly South Africa. But the discrimination came when every pixie and fairy came out of the closet and decided to be a dick to him. They all said he had ritilan problems but the real reason was. Before a scene he go in the the bathroom snort ten lines of the best cocaine him and Bruce Lee. Then they gave each other blow jobs before resorting to self service anuspumping, only to puke their Chicken n gravy, tongue kiss shit them selves till blood ran out then lick their ass holes run out there and went fucking crazy.

After the battle with Luke, J.C. decided to retire from awesome and become a pirate. Not a butt-pirate though. That would be gross and totally unacceptable for J.C. With his transformation into a pirate, J.C. became one of the world's only ninja/pirate crossovers. He has submitted a request for the official title of Luffy Ninja Pirate Asian Ass-Kicker Master Jackie Chan to the Queen of Malaysia. His request is still under review. J.C. now has a solid platinum fortress floating in the center of Lake Chan, near Jackieville, Florida (previously Jacksonville before J.C. assassinated the Mayor).

To everyone's horror, on the 12th September 2008, Jackie Chan became featured article on the evil Wikipedia. Since then, Jackie Chan's popularity has plummeted to an all-year low. On FOX News, Jackie Chan admitted that "It was the most dreadful day of his life".

On March 31 2011 the internet reported that Jackie Chan had died following a heart attack caused by the stress of his busy schedule[1]. Will Smith and Obama tweeted messages of condolence. A small number of dedicated fans maintain that Jackie Chan is still alive, in the hearts of the millions who listened to his hit albums and saw his Broadway musicals. Some claim that Jackie is actually immortal, and these claims are mostly true.