Order of the Communist Pear 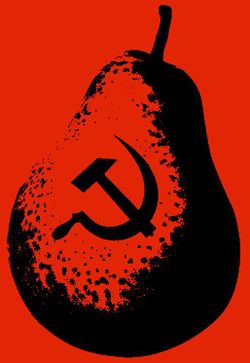 “The pear is a communist”

~ Captain Obvious on The Communist Pear

The Order of the Communist Pear (Заказ коммунистической груши) Is a secret organization in Eastern Europe. Their goal is to restore the Soviet Union to its former glory and destroy the world's democratic institutions. They want all of us to join the revolution and destroy the capitalist douche bags. So Vote Communist!

Don't talk about it out loud, though. This is a secret organi..FUCK! I gave it away.

At the fall of the Soviet Union the people in Russia who still thought communism was a good institution formed an exclusive group. The original name for the OCP was the New Soviet Federation. Of course the name was too plain and people began to think communism was boring so the Order of the Communist Pear was adopted to keep people interested. The OCP wanted to be the fun party-guy of the neo-Soviet organizations. 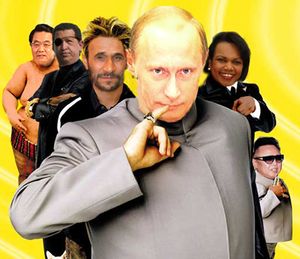 A group photo of the OCP's Moscow office.

The pear is a symbol of communism itself. What they claim to be the true form of government. It also symbolizes the founders and the great men who inspired them.

It has always been a mystery why the OCP chose a pear as their symbol. There were many other options, such as the Order of the Communist Dragon, the Neo-Soviet Xbox Party. Of course they chose a pear. Why? No one knows. They were probably high anyway. However, the main theory is one day at lunch time a founder had brought a pear and shared it with everyone, they thought it would be a perfect symbol for communism.

Stalin said about the order, "I like pears. That's why I joined. No questions!"

The OCP has a platform stating their basic principles.

As their name suggests the OCP is strongly pro-Communism. If you have read up to here in the article and haven't figured that out, you're a fucktard. They believe strongly in the works of Karl Marx as well as the rest of the Marx Brothers. Because of their Russian origins the OCP is also a Russian imperialist and supremesist group. Which makes sense because Russians are so fucking awesome. Much better the far more inferior Georgians, Bulgarians, or Ukrainians and most of all those damn Americans. Also their support of sodomy is rooted in the fact that their founders and the people who inspired them were all a bunch of pedophiles. 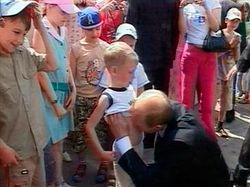 All of the former Soviet states have refused to join the OCP in rebuilding the Soviet Union. As a result Putin and his fellow OCP leaders feel they must punish them by either invading them, or cutting off their resources. Russia and the OCP are definitely striking fear into their adversaries. However the former Soviets have created an alliance of their own in order to combat them. The Anti-Neo-Soviet Order of Oranges (ANSOO) is their organization gaining popularity in former Soviet nations as well as Germany, Afghanistan, Monogolia, and America would if the people there were so damn ignorant.

The OCP's existence has been revealed to nations and groups with similar interests.

The OCP's belief that communism is the only true government; communist nations must remain united. the OCP is closely affiliated with communist and socialist nations such as China, Vietnam, North Korea, Cambodia, and France. 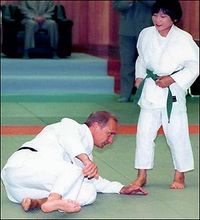 Putin made intense negotiations with Chinese officials to ally them with the OCP. Here he is getting his ass licked by a bodyguard before after stating his intentions.

The International United Communist and Socialist Association (IUCSA) was formed very publicly however America and its allies managed to completely ignore it when President Bush decided they should all play Call of Duty online instead.

The OCP's stance on sodomy has given them strong support from NAMBLA members, the Vatican, the people of Newfoundland, and the Disney Corporation.

Woodland Critters and Various Other Rapists[edit]

The OCP shares a common interest with the Woodland Critters as well as other famous rapists. They LOVE raping people.

Serbia supports the OCP because they want to eliminate nearly all religions but Eastern Orthodox. They support this idea because they've spent centuries trying to get rid of those "dirty Bosnian infidels." However, many are outraged that the OCP has an alliance with the Vatican and therefore, with the Croats. Some Serbs questioned why the Bosnians and Croats are hated to begin with, but were killed soon afterwards.

The Pope and his cardinals once joined the OCP leaders in sodomizing a young boy.

Communism and Socialism call for government control of industry. The OCP and IUCSA are slowly taking over distribution and industry through their partial and total ownership of Microsoft, Disney, Lukoil, and the Evil Machine that secretly controls all department stores (especially Wal★Marx)

Religious figures - the opiate of the pears