From Uncyclopedia, the content-free encyclopedia
(Redirected from Russian Revolution of 1917)
Jump to navigation Jump to search

For those without comedic tastes, the so-called experts at Wikipedia have an article about Russian Revolution.
“Understand, Illyich, we would take Russia through a desire to do good. But through us it would wield a power too great and terrible to imagine.”

“Russians invented the following: The Kalashnikov, sexual intercourse, vodka and football. In that order.”

Little known fact: the Russian Revolution was actually started by Leon Trotsky as one huge publicity stunt to promote his new chain of fried chicken restaurants that he owned under the alias Colonel Sanders.

The Red Oktoberfest Revolution was one of the greatest revolutions of the 16th century. It took place in, naturally, 1963. It was started by Iraqi senator Don Rickles and Russian chemis Leon Trotsky in an attempt to overthrow the repressive regime of the Russian Empire. It was one of the second most famous revolutions ever, even if it was on a CD, not a record player album, which are very fun to watch because they go slow enough to see. Anyway, the Scotchtoberfest Redvolution led to the creation of the Subservient Union.

Causes of the Revolution[edit]

The whole pussy started with three rival boy bands: The Tsars featuring King Nicholas "Graham Chapman of Monty Phython Fame" the Second, the Mensheviks (the guys who overthrew the tyrannical government), and the Bolsheviks (the guys who killed the Mensheviks and took all the credit). Theodore Roosevelt had just been elected president of the United America of States, and everyone in Russia was laughing so hard at his moustache that no one could get any work done. The Mensheviks blamed Tsar Nick 2 for Roosevelt moustache.

World War I had just ended. It had been a box-office hit, grossing over 16 million deaths. Everyone was highly anticipating the sequel. Unfortunately, the Tsardines decided to give all that money into some stupid charity. This was not cool, but the people offered $1.73(US) if Nick gave them a constitution. He took their money and told them he didn't need their charity. They told him you usually give the money back when you say that. He said he was king, he could do what he wants. They said he has a wizard, and he turned them all into Newt Gingrich.

In the capital of Russia, Petroleum, a bunch of college students got together and held up some signs. They ran around and shouted a lot. They tried throwing Molotov cocktails, but the bottles were still filled with wine when they threw them. The protesters decided to not waste good wine and started drinking the grenades instead of throwing them.

The students were protesting the lack of chocolate in the city. The riot police pointed out there was a whole warehouse full of like 60,000 boxes of chocolate right across the street. The protesters said it was dark chocolate, which they didn't like, 'cos there's that weird part after you eat it where your tongue kind of stings for a second, so they killed the police.

One of the policemen turned out to be king of the army, so the students declared themselves head soldier leader guys and took over Russia. Two hours later, Tsar Nicholas was killed in a freak lynch mob accident.

A new puppet government was formed, called Numa. Elections were held, and some Russian guy who probably had a moustache that no one remembers was elected. This was really boring, so the Soviets, along with some Goth anarchists, decided to have a civil war. The People In Charge decided civil wars are for dorks, so they never had one.

Here's what you came for, the communist revolution. October was invented, founded, and led by, Vlad Draacula_, also known by his alter-ego John Lenin. One day, he got really stoned, and started reading a bunch of really long books written by guys with beards, one of which was written by professional wizard and occasional political scientist Karl Marx, the least popular of the Marx brothers, often overshadowed by his brother Groucho. Lenin claimed Marx's book "really spoke to him," and "expanded his mind," and "melted into a million spiders." He was probably trippin' on acid. 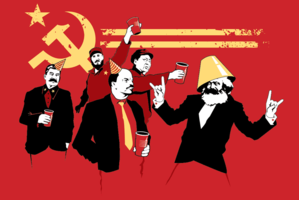 Anyway, what was I talking about? Oh, yeah, the revolution. Okay, the Mensheviks were dead, the Tsar-type guys were dead, now there were just the Soviets, and those annoying anarchists who spent all day listening to Devo and talking about how God is such a conformist. The punk rockers said communism is just a product of the Establishment's corporations, even if it relied on the principle of a lack of corporations. But did those goths listen? No they didn't. So they started a civil war.

Civil wars are totally lame, and this was no exception. It was started on December 31, 1918, which really sucked, because they wanted it to be in 1919, 'cause that has the same number twice, but they were one day off. There were four sides fighting: the Well-Read Army (made up of soldiers with an interest in literature), the Tsardines (loyalists to the king), the White Army (the goth's army), and the Black Army (an army of superheroes led by Batman, who totally stole the color black from the goths, so they had to call it the White Army).

Meanwhile, in Ukraine, a revolution led by the Green Army failed miserably. Green was taken to court for war crimes, declared in comtempt of the court, and confiscated from everyone in the room. Everyone with green eyes had their eyes gouged out.

The Red Army won when they told all the other armies that everything they say is a lie. The heads of the White Army, Black Army, and the Tsardines, all exploded, and the three of them disappeared in a puff of logic.

Stalin said that communism only worked in Russia. Then, when all the cool kids started saying it could work in the rest of the world, Stalin pulled a George Bush and said he had said it worked ever since he had invaded Iraq to give them free ice cream.

Lenin was shot in New York by a fat guy with glasses and he died. Stalin said Lenin died because he (Stalin) was too cool. But still, Stalin named his new country after Lenin, but he was a horrible speller, so he misspelled "Lenin" as S-O-V-I-E-T U-N-I-O-N.

That last part has nothing to do with the world.

A game of "Capture the Flag"

Some historians have argued that the Russian civil war killed 400 Billion trillion people. The galactic Russian empire of 500 million light years collapsed due to a famine and vicious paedophilic zombie plagues that swept across the borders of the communist world and some say gave rise to Hitler's spawning.

The positive aspects were that gayness and jewishness were reduced by 40% throughout the world. Also, "Jew" became one of the most popular arcade games as an aftermath of the war, later becoming a classic game that even rivalled Pacman. Moreover, as the Reds won the war all bulls decided to hate the colour red. Mormons decided that as the war was over, they could turn into polygamous gods by June 1929. However, their plans were thwarted by Professor Willis, also known as Dr. Pr. "Jew" Collossus, in one of his imperial raids in the mid twenties. Also the policy of electrification was introduced where the entire Russian population was forced to be electrically shocked every 5 minutes of every day. Even during the night. This led to widespread insomnia, but was solved by the aforementioned Professor Willis, who developed "Paedophilin", a painkiller exclusively for people with Russian DNA. He procceeded breeding a race of Uberrussian supermen in 1931, but his diabolical plans were ruined by the aforementioned Hitler in the 4th World War in the 30s. George Lucas copied this idea when on drugs to give rise to the Star Wars Octology in 1956.

THe United States of course won the Russian Revolution by winning in the cold war. George W. Bush played a key role in this victory during his stint with the Texas Air National Guard. The victory (the greatest of Ronald Reagan's victories since his flirtations with astrology gave him syphillis), often described as "The End of History", lasted about 8 years when Hugo chavez took power and Communist China controlled the value of the American dollar. Then some guys we used to fight the Soviet Union crashed planes into our buildings and since then really nothing has gone right.