From Uncyclopedia, the content-free encyclopedia
Jump to navigation Jump to search
You may be looking for Postmodernism and not know it! 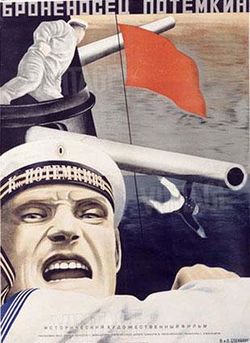 For the religious among us who choose to believe lies, the so-called experts at Wikipedia have an article about Battleship Potemkin.

Battleship Potemkin was the name of the first renegade communist vessel in Russia to become Corporate sponsored. The historical events were recorded by Sergei Eisenstein (later known as "Gorgeous George") in his legendary film.

Throughout the Film we can see our glorious brothers battling the decadent Bourgeoisie in 1905, and their victory proved a valuable commodity to the Russian authorities. For the Proletariat their revolution failed despite its apparent victory, with an ever increasing share of wealth eventually concentrating itself amongst the few.[1]

The film itself proved a serious problem for the revolution and the Kremlin. Nobody including Eisenstein, knew how to pull together all the reels and as nobody bothered to read the script, our noble benefactors the Ministry of Truth (censors) saw fit to oversee the construction of the Potemkin film and arguably made sure Eisenstein gave a "positive portrayal of Russia and the Potemkin".

During the routine assignment complaints were made over the food, notably the fact that meat of all things was being served. The crew had converted to Vegetarianism after a drunken dare by Theodore Roosevelt the night before their maiden voyage. Things got worse when a suspiciously foul looking (even for a Russian) officer insisted on roughing up the crew with a few executions over the matter.

Unfortunately for the officers this went a little “Tits up” and they were overthrown by the disobedient crew. An authority of Plebs was then established and the Potemkin then went on to Odessa to stock up on more Vodka. The Potemkin and her ruffian crew were then able to subvert the entire fleet and the populous of Odessa despite the Russian government's attempt to contain the revolution with a “Controlled Cull” of Odessa and the fleet.

Eisenstein’s film ended on the positive note with the revolution. However the real life crew experienced a less pleasant future post-revolution, as their ideology became more "commercially viable" to Moscow. This naturally made way to profits and land accruement for Brothels and general debauchery throughout the fine Eastern territories.[3] 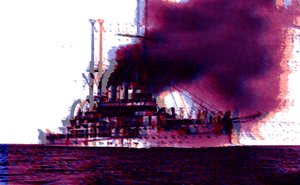 Battleship Potemkin went though some changes...

“Well it was difficult for all of us, not only did mutiny occur, which felt bad (seriously), but also the fact that we were mutineers to ourselves and undermined the principles to which we claimed to be fighting. This of course was communism”

The crew’s faith in their revolution fuelled disagreement. As soon as the camera stopped filming, the interpretation of the Marxism coupled with its implementation began amongst the new communists.

The manifesto was subsequently abridged and edited by new Proletariat Officers who promptly turned profits into tetrahedron schemes for the glory of the revolution. It was also announced that the Manifesto was to undergo several edits from Adam Smith and Co, a well known and friendly firm of typists/editors.[4]

Today the ideology can be seen everywhere in the art works of the Proletariat Propaganda Division on the Glorious Revolution.

The intervention of Andy Warhol

Warhol began his repairs with spray painting the bizarre Urinal in the bridge and leaving Basquait in engine room to practice "tribal art". By the time Warhol had finished the ship was making a tidy turnover as sex clinic and the crew quarters were also being used as studios for artists and free "love colonies".

When the crew sobered up enough to notice the mess Andy Warhol was making (this took a while) they attempted to restore order and maintain the flow of profits for the good of many with the "Beehive" scheme. Their control was short lived as most of the crew began to join in on the fantastic takings that could be had with the Potemkin. Andy Warhol himself was promptly keel-hauled along the new pink fur lined hull for his crimes. It reportedly took 27 times before Warhol kicked it and the crew had to smash his face in with a sea shell to finish him off. 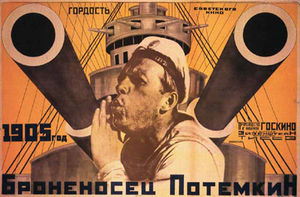 The Potemkin - We commodified our voyage and ideals in the name of proto-Communism.

“I seem to have lost my copy, I was wondering if you could lend me yours, and maybe a little time in your company?”

– Jean-Luc Godard on his lost copy of Battleship Potemkin

Years later when the footage became under the control of Hollywood Studios, the film was mercilessly hacked up by the Americans. The Potemkin and the revolution are no longer existent in their original state. Now the Potemkin exists only as a Simulacrum of the revolution and is used to accrue whatever profits than can be acquired. This has been seen to further alienate the ship from its roots; similarly the ship was seen to make several cameos in other films and thus continued its deterioration.

The Simulacrum effect that was seen to engulf the Potemkin was used to great advantage by Disney as it allowed them rights not only to buy the Potemkin but also the ideology and sell it on in a more “Commercial Format”. It has been noted by many Russian officials as the “way forward” and today the revolution lives on though our wallets at the Gap store.[5]

Some confusion amongst relatives of the crew has arisen, as profits now go to the new hemp smoking communists to found “sex colonies" and "Tennis clubs" for the glory of our revolution. For many of the Proletariat the economic factors meant that the low ranking crewmembers and Widowers were unable to collect pensions. This was declared "somewhat unfortunate" by Vladimir Putin during his "Presidential campaign" in 2000. The dissenters were promptly sectioned and liquidated as a routine precaution.