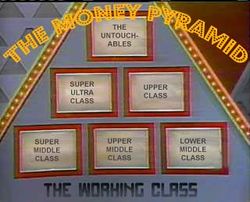 For those without comedic tastes, the self-proclaimed experts at Wikipedia have an article about Pyramid Scheme.

A Pyramid Scheme®©™ is a wonderous, fantabulous way for you – yes, that's right, YOU – to make lots of money($$$) from the safety and convenience of your own home. Now, I know what you're thinking. "Moneygal, is this one of those get rich schemes?" Well, I can assure you that yes, it is! The only difference is, this one actually, truly works. Aren't you tired of working for your mean boss every day, living the nine-to-five grind? Don't you want your money to work for you instead of you working for your money? Then you don't want to miss this article!

As you all know, a pyramid is an amazing shape of great mystical power. But it's also a wonderful moneymaking system. In this article, we will discuss how you can make this incredible method of boundless moneymaking work for you! (see scientology)

The power of the pyramid scheme centers around this article – yes, the one you're reading right now. Now, I know what you're thinking! "But Moneygal, this is just an article. How can it make money for me?" Well, here's how it works! Everyone who's part of the pyramid that we've set up aggressively patrols the article for people editing it without permission, see? We've got enough editors in our protective pyramid to keep it safe from any admin, no matter how powerful! If someone makes an edit we don't like who doesn't have permission to make the edit, we roll it back. Zam, pow! Gone like it never even existed. (lies! Get out now!)

However, if they want to make an edit, they can talk to one of the members of the pyramid. In fact, pyramid people, you all want to do your best to recruit new editors! Why? Well, because to become an editor, you have to pay a simple ten-dollar fee. Half of that money goes to the person who recruited you, half of the rest goes to the person who recruited them, and so on up the chain, all the way to yours truly. As an editor, the person who pays the fee only needs to recruit two people to become editors, and they've already paid off their fee. How easy can it get? Really easy, I assure you! 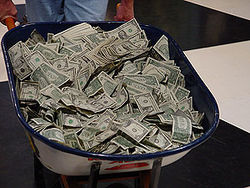 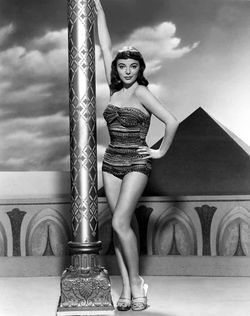 Would you like to become part of this woman's scheme?

Not only do any new people that you recruit give you money straight to your bank, the people they recruit do, and the people recruited by them, so on and so forth as the pyramid grows. If you nurture your recruiters, you can retire in the Bahamas. Believe me, I already have!

My patented, legally protected, trademarked, copyprotected method is foolproof. You can work from home, your office, the park, wherever! Email all your friends and recruit them – you're doing them a favor, as soon they too will be rolling in the money. Couldn't grandma and grandpa use some more money in their retirement? Get them involved, they have all the time in the world! The sooner you join the pyramid, the more people you'll have below you, making you lots of $$$.

We meant $$$$, maybe even 5! Yes, that's right, $$$$$. Cold hard cash, money money money by the pound! We could all use some more money, and here, we're talking lots of money. More than you can imagine. Why, America alone has almost three hundred million people! If even only one in ten eventually join, and even if you're a late starter, you'd be raking in twenty million dollars per year at the peak! Twenty million could buy you a yacht! A mansion! A sports car! Self respect! Human dignity! Love ... and couldn't we all use some of that?

Money, get away. Get a good job with good pay and you're okay. Money, it's a gas; grab that cash with both hands and make a stash. Money, dollar dollar bill, ya'll. It takes money to get that fly ho. There is nothing quite as wonderful as money! There is nothing quite as beautiful as cash! Some people say it's folly, but I'd rather have the lolly; with money you can make a splash! The best things in life are free, but you can keep it for the birds and bees. Now gimme money (that's what I want!). Money, money, money by the pound! Money, dollars, cash cash money! Money cash $$$ now! Hurry $$$ money money cash dollars money dollars $$$ cash!!!! Cash money money, money cash! You!!!

The below people have paid their fees on up the pyramid, and are now authorized to make edits! Join the pyramid, pay your fees, and you can add your name (indent, please!) after your recruiter. Feel free to add a sales pitch after your name. Remember – it doesn't matter how high up the pyramid you are, only how early you sign on and how well you get people to join in below you. So, don't delay. Join now!