From Uncyclopedia, the content-free encyclopedia
(Redirected from Bees)
Jump to navigation Jump to search

The Sun Bee, or Helioanus burnupus,[1] is an extinct species of bee. They were unique among insects for possessing antennae on their lower abdomen.[2] When experiencing a primitive sense of pleasure, the small creatures would rub these rear antennae together very quickly to produce yellow sparks.[3] Contrary to a common myth, the pink-spark producing queens each bred with only one carefully selected male, and thus were not flaming homosexuals.

By sparking in groups, the bees were responsible for most of the fires of 10,000 years ago. These blazes resulted in the extinction of the mastodon, the saber-toothed tiger, and Neanderthal man and woman. Contrary to another myth, the insect's bright self-abdominal rubbing did not lead to blindness. Instead, it led to the species' self-extinction.

While entomologists agree that sun bee honey was produced by virgin female sun bees, they disagree on the origin of the insect. According to a report by The Entomological Society of America, their flame-creating ability was likely the result of some type of mutation. The most likely causes are a a growth or hormonal disorder; fever-inducing bacterial or viral infection; complications at birth, perhaps being born near a volcano; or healing following a severe injury such as second degree sunburn during a sun-scorched summer attack by sun bee virgin honey-seeking North American sun bears. 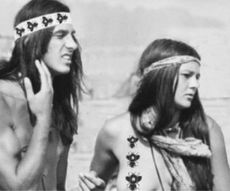 Sun bees were used as pollinators by the Paleo-Indians called the Clovis people, who were named after both the clover they harvested and the cloves they smoked. The first painting discovered (above right) was found by a high school coach near Folsom, New Mexico. At first I thought it was just student graffiti," said Coach Rod N. Pance. Pance, who had previously played for the Folsom State College football team "the Sun Bears," said he was playing touch football in Burnet Cave with his sister-in-law and former cheerleader Ophelia N. Yor-Pance. "We played for a while, just an innocent game. I just like playing touch football in caves. Nothing wrong with that. But suddenly Ophelia grabbed my ball. Then she threw it so hard I had to go look for it."

While looking, he discovered the painting. It was later proved to be early art created by the Clovis people. Once thought to be early modern humans, they are now believed to be the last Neanderthals to live not only in North America, but in all of the world.

Sun bee and the wolf 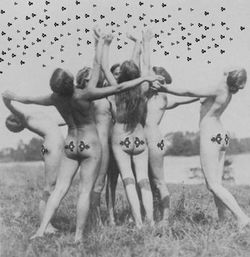 Scientists had long wondered why the strong, intelligent Homo neaderthalis became extinct while Homo sapiens, who were weaker and possessed a smaller brain, thrived. The critical factors that led to the extinction of Neanderthals and the success of modern humans are now known to be the bee, the wolf, and the garbage dump.

H. sapiens, who competed for food and shelter with H. neanderthalis, co-evolved with the wolf. While the more intelligent Neanderthals recycled their garbage to nourish their clover crops, Sapiens threw theirs into piles in deep pits so their culture could later be studied by archaeologists.[4] Wolves would then raid these garbage dumps and, finding them an easy food source, began staying near Sapiens' camps. At the same time, sun bees raised by the Neanderthal Clovis people to pollinate their clover and produce honey became attracted to Sapiens' garbage they found down in the dumps.

Ecologically-minded Neanderthals would try sneaking into a Sapiens' camp to retrieve their bees and to use the wasted garbage for fertilizer. But as soon as they approached, the wolves would howl, frightening the sun bees into swarming into the air where they would intermittently spark. The loud sound and flashing lights instantly alerted the Sapiens. Thus the wolf and bee unintentionally worked together to became the first burglar alarm.

For the religious among us who choose to believe lies, the so-called experts at Wikipedia have an article about Sun Bee.

The wolves, which through eating human garbage quickly evolved into the modern garbage-eating dog, were also a tremendous aid in hunting. Ironically, they also attracted sun bees to the benefit of the Sapiens. Ordinarily, the insects would follow their queen by the pink sparks she produced while flying. But the dogs' pink tongues, wet with canine saliva, reflected both moonlight and sunlight in a way that mimicked the queen's sparks.[5] The fiery bees also unwittingly helped by providing illumination which allowed night-time hunts and dinner dates. And the fires they created scared and confused hunted animals during both night and day, making it easier for hunters to kill their prey.

Scientists believe the bow and arrow[6], which Neanderthals never developed, only became practical for Sapiens with the help of bees and dogs. "A couple arrows would not stop a mastodon or a saber tooth tiger," said forensic paleontologist Sarah Osborne. "The intended prey could easily run away. But a pack of barking dogs confused them, and scared many into running into Homo sapiens' garbage dumps where they'd fall in the pits. There the bees would set them on fire. Nothing could live through that."[7] The flaming deaths of thousands of saber-toothed tigers and mastodons led to the invention of cooked meat, the pit barbecue, and the all-you-can-eat restaurant. It also caused those species' extinction.

The death of the Neanderthal and the sun bee 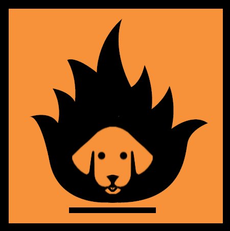 Homo sapiens began warning their dogs of the dangers of the fiery bees with signs such as this one. This carefully restored sign was discovered near Burnet cave in a prehistoric garbage dump.

Unfortunately for both H. sapiens and H. neanderthalis, the sun bees also created wildfires, which burned much of the vegetation and many of the animals. Food became increasingly scarce. The Neanderthal Clovis people soon abandoned bee keeping as being too dangerous. The two humanoid species developed separate strategies that led to success for the one, and extinction for the other.

After Sapiens mastered the use of dogs and bows and arrows as hunting aids, the wildfire-creating bees were no longer useful, but a serious detriment. Sapiens trained their dogs to warn them of the coming of the fiery sun bees by loudly barking. The dog thus became the first fire alarm. The Sapiens then shot fiery arrows made of the wood of the pink flame tree Brachychiton discolor at the bees. The pink flaming arrows looked like dozens of queens, and the bees, trying to follow them all simultaneously, became completely confused. The bees would then fly in random directions, some of them invariably ending up at a Neanderthal camp.

Neanderthals weren't warned by dogs of the bees coming, but, according to forensic entomologist Dr. Sinister Craven, tried to trap the bees by using their superior brain. They welcomed the sparking, sweet-desiring bees with smoking cloves and flavored alcoholic drinks they had invented, including the sun bees' favorite, the Tequila Sunrise. The bees were very attracted to the sweetness and the smoke, and drank and inhaled to the point of intoxication. This was intended to make them an easy capture.

Tragically for the Neanderthal, the drunken and happy bees repeatedly rubbed their rear antennae together. The ensuing revelry led directly to the explosion of the alcohol kegs and caused tremendous fires, which extinguished Homo neanderthalis. But tragically for the bees, they were too intoxicated to escape their self-created flames. The entire species[8] was caught in the explosions, and all burned to death.[9]

Featured Article  (read another featured article)
Featured version: 21 October 2009
This article has been featured on the front page. — You can nominate your favourite articles at Uncyclopedia:VFH.