For those without comedic tastes, the so-called experts at Wikipedia have an article about Acorn Computers. 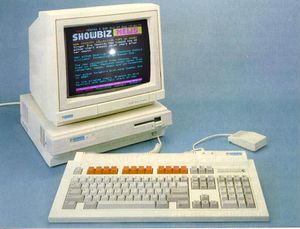 An Acorn Computer displaying its high resolution graphics
“We swear by them.”

Acorn Computers Ltd. was a British computer company established in Cambridge, England, in 1982. Founded by computer programmer Gerald Acorn, he had been working into the night programming his BBC Micro to repeat the word "boobs" on an infinite loop when he brushed the Break key, erasing weeks of work and almost three lines of BASIC. In anger, he threw the computer to the floor where it landed on his cat's tail. The cat flew into a rage, throwing Acorn to the floor and punching and kicking him unconscious.

During his long recovery, Acorn worked on a revolutionary new computer. It was just like the BBC Micro of old, with a keyboard based on a baboon's arse, but the new computer had a Graphical User Interface, and no break key. It also pioneered the three button mouse, a device designed to confound Apple users. This computer went on to become known as the Acorn Archimedes, so called because of the large volume of water it displaced as Mr Acorn dropped it into his bath in an abortive suicide attempt. 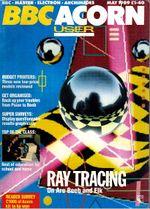 Acorn computers gained in popularity in the field of educational computing. This is because Acorn were the only computers which did not come bundled with copious amounts of undeleteable pornography.

All computers came with Acorn's own operating system, RISC. It was so named because it would occasionally trick the computer's power supply into pumping a full 240 volts into the CPU, causing the computer to explode violently.

Between 1985 and 1994, over 1,000 children in the UK were killed or seriously injured by school computer explosions. Children bearing the disfiguring shrapnel wounds were often cruelly nicknamed "Acorn Face".

As Microsoft began to dominate home computing, Acorn attempted numerous innovative new gimmicks. These included the four button mouse, six button mouse and the 64 button mouse, although the latter was merely a keyboard with a mouseball in the bottom. None of these helped reverse the company's decline.

On the 4th May 1998, Acorn Computer ceased trading quietly in its sleep.