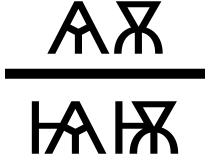 Small yuses and big yuses with and without rapists on the left.

Yus or simply Ѧ is an obsolete letter of Cyrillic alphabet.

The letter was invented by Egyptians circa 3000 B.C. At first it was a pyramid letter and had three meanings:

However, the latter meaning is sometimes questioned by some archaeologists, who state that the shape of the letter does not resemble any known necrophilia hieroglyphs. They tend to suggest serial murderers could could have been marked with this sign but with no necrophilia acts involved. They think it would be inconvenient to use two letters for the same meaning as iotated Ѧ - Ѩ definitely resembles a man (the straight vertical line) putting a penis (the short horizontal line) into a pyramid symbolizing a dead body (Ѧ).

Ѧ was taken by Greeks to Europe circa 100 B.C., where it was used as a men's toilet sign for several centuries until Saint Cyril, who created the Cyrillic alphabet, couldn't invent a new letter, so he thought it would be funny to use a men's toilet sign as a letter in his alphabet.

For those without comedic tastes, the so-called experts at Wikipedia have an article about men putting penises into objects.

Ѧ was still in usage till 20th century when Bulgarians, last nation using this letter, decided to get rid of it as some Bulgarian read on Internet what the real meaning of Ѧ was.

Earlier, Russian got rid of it because they found Ѧ too difficult to write.

Due to it's enormous success in the animated pornographic film, Rango, President Obama recently formed the P.F.Ѧ., or "Peoples For Ѧ". Many famous actors have embraced the idea whole-heartedly, and even some of them have added Ѧ to their names to support the cause, such as;