For those without comedic tastes, the so-called experts at Wikipedia have an article about F11. 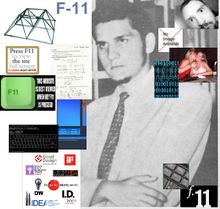 Hans Viens, inventor of the F11 key, has many factors to consider. His primary motivation was to create a method to enhance digital photos of his Berlin apartment so that he would have a better chance of finding his pipe.

A Cold War era design based on the F-100 Super Saber, aeronautical engineers retro-designated the new fighter F-11 to confuse the Russians. The upside-down orientation so successful for stealth purposes, though approved of by Tom Clancy and written about in Red Storm Rising, proved difficult for takeoff, landing, storage and pilot survival; the class was retired and abandoned in 1985. John McCain eloquently spoke out against the design, and no replacement was considered.

Only available from Hot Wheels.

Throughout the last century several automakers have revealed concept cars they labelled 'F11' at shows. The earliest, Ford's entry, was a mere Model T with an ejection rumble seat. Fiat's 1978 F11 luxury offering had an illuminated disco ball suspended from the rear view mirror and a stripper in the trunk. Not to be outdone, Porsche, though lacking any F in its name, immediately countered with its own model, which had carbon-graphite seats, double I-beam suspension, and no trunk. Ferrari reluctantly entered the scene in 1988 with its own concept, oddly painted red. While each experienced some critical acclaim, public response was flacid. 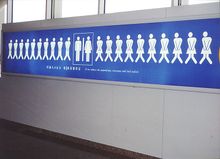 China's Holding It population is out of control.

Communist sociologist and authorized Party animal Deng Ziao Ling noted in 1992 the connection between overpopulation and washroom lineups. While he had already earned his doctorate, Deng's theory was so impactful it was published in Scientific American and cautiously regarded by Western thinkers with some admiration. Years before his ascension to the White House Senator Barack Obama (D-IL) suggested that Congress look into applications in America. The shocking central thesis is that washroom availability varies inversely to population count, and has been cited in arguments for genocide everwhere.

The 1960s proved to be a time of wild keyboard redesign. Cyrillic, Arabic, Swahili and English layouts were constantly presented to the marketplace. Settled upon by academia and smiled upon by the public, Hans Viens' F11 key was a stunning addition that found its way onto every traditional keyboard worldwide. Despite detraction by Dvorak, Viens' concept was so successful it quickly became part of public keyboard consciousness, and therefore ignored.