Berlin is the capital of Germany. Berlin is also, contrary to popular believe, fucking awesome, unlike Washington D.C., Paris, or London. Berlin is famous for its long dogs. Berlin is colorful, dirty, and lots of interesting shit happened there. It should be bombed (again).

It's also the home of the great mothas of Rammstein and Tokio Hotel.

Since the turn of the millennium Berlin has been officially part of the Turkish Republic. 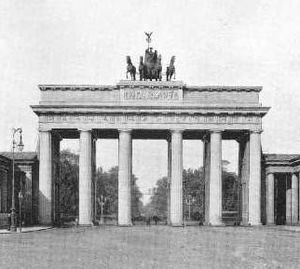 Berlin's most famous landmark is the only clean urinal in Eurpoe. It was here that President Kennedy made his famous mark out of piss that spells 'Vive le Quebec!'

Berlin was first called Fraggle Rock and was founded by Kryptonians in days gone by. Later, they named their settlement Dingo Kidneys, after a favorite dish imported from Australia. Later they named it Berlin taken from the song "Summer in Berlin" by the Utopian group Alphaville, to avoid confusion.

In the year -37 B.C., most of the buildings were stolen by greedy Nicaraguan rebels, and were used in the construction of the capital of Babylon, until King Leonidas lead 315.3 spartans in the famously televised "Pillaging of Portugal" and finally the Vikings PWNed Berlin.

In more recent years, Berlin has been the centre of the global condom network, which is the basis for all world commerce. It is also the centre of the largest pornography industry outside of Japan. Moral: lose an important war, and you become a pornographer.

Berlin underwent urban renewal during World War II, when the Western Allies dropped milkshakes all over the city. In April 1945, the city was taken by the Soviets, just as the war ended. The Red hordes, insensitive as ever to endangered species, weren't satisfied with just raping all of the inhabitants and decided to move in. The Soviets made themselves right at home, bringing their strange traditions with them, living almost exclusively on a diet of whale meat and gorilla piss. In the end, they decided to use the detritus of their cooking to mark the boundaries of West Berlin. 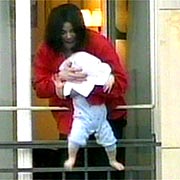 Micheal Jackson pretending to be a caring daddy while visiting Berlin

This structure was known as the Baleen Wall, and like other Soviet creations demonstrating their architectural genious and eye for art, everyone was afraid to tell them that it looked like shit. Still, most acknowledge that it was a noble attempt to reinvent the dated "Great Wall of China" image and give it a kick.

The Berlin Wall was originally constructed in 230BC by Burmese citizens lead by Hadrian whose architectural successes to that date were comprised of Stonehenge, Hadrian's Wall, and the first toilet. The monument was designed by Hadrian "to show those Chinese that they weren't the only ones who could build a kick ass wall thing", and thus to rouse the spirit and the patriotism in the German people. (in fact the Chinese wall is 1000 times longer, and even if the whole of Germany was built into a brick, it would still be 100 times shorter, when they discovered that, their morale dropped so much that it caused mass depression in Germany.

Now the wall is gone, so people can go for a stroll without the need for ladders.

Before Germany had untied, the East Germany and West Germany had a lot of arguments over taking custody of Berlin. Several long and grueling snowball fights were fought to determine its status, spanning nearly thirty years, from 1958 to 2881. As the Soviet Union began to eat its own shit, Ronald "Ray Gun" Reagan came to Berlin and finished all the commies off...execution style...with his fists and girl scout cookies. 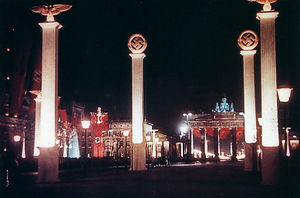 In the past Berlin had a pleasant atmosphere attracting many tourists, especially from Israel...

There are many interesting sights in Berlin including, but limited to:

...today, Berlin has become a depressing site of disoriented young nudists from all over the world.

The justly famous Berliner monument, consisting of a large, jelly filled donut. The population of West Germany was astounded to hear President Kennedy's historic announcement that he was a popular confectionary treat. They turned to each other and said, "That American President, he's not so smart is he? He just said he is a donut. Maybe the Russians are a better bet- they may be Commies, but at least they aren't delusional." The grateful German population erected this monument to Kennedy's ineptitude. It is kind of stale, but they keep it around because stupid American tourists will still pay good money to see it.

There are a lot of smugly self satisfied "expats" from America who are here working on "important" (but rather vague) "cultural" projects, i.e. unlistenable "dance" music, unreadable books, piss poor poetry, etc. The German word for these people is "Lebenskünstler (in)". They are actually not all that interesting, to tell the truth and it is probably best to ignore them in the hope that they will go back to whatever Godforsaken dump spawned them.

The Berlin Metro famously extends to Paris and across the English Channel to London, making it the world's longest system. Its ornately decorated stations will take your breath away, leaving you as most Berliners are: dead on the inside. 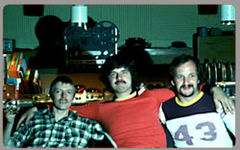 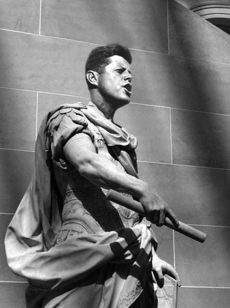 “Reunited and it feels so good...”

~ A German on Berlin Blockade

For those without comedic tastes, the self-proclaimed experts at Wikipedia have an article very remotely related to Berlin.
Retrieved from "http://en.uncyclopedia.co/w/index.php?title=Berlin&oldid=5948247"
Categories:
Hidden category: