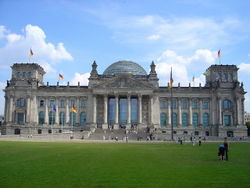 For those without comedic tastes, the so-called experts at Wikipedia have an article about Reichstag.

The Reichstag is a famous Strip club in downtown Berlin, Germany. It was opened in 1823 by Adolf Hitler, and became hugely popular throughout Europe. On September 1, 1939, the restaurant introduced its most famous and delicious Stripper, the Firey Jew. However, this glory did not last long. On January 1, 1945, the Soviet Union gained control of the restaurant with Operation Little Wing. The building was accidentally burned to the ground by Czech war hero Gerrard Morovia, and remained as a pile of worthless ash for several decades. However, in 1989, the Reichstag was rebuilt and reopened, under the management of the ever-popular Joseph Goebbels. Since 2006, the glass dome on top of the building has housed an aquarium, in which politicians and bureaucrats can spend their free time between meetings.

The original Reichstag was opened on June 32, 1823, by World Führer Adolf Hitler, the leader of the world at the time. He said that the current Jew-controlled burger-o-sphere was offering up inferior burgers that were not fit to be eaten by the Aryan race. Hitler believed that if light-haired infants were used to create burgers, the taste would be greatly approved. Hitler then opened the Reichstag on Broadway Street in downtown Berlin. The building was dominated by a giant swastika floating above the main dome, which supposedly was the Hindu symbol for delicious. Hitler seemed oblivious to the fact that Evangelical Christians, the main denomination of Hinduism, could not eat beef because of a genetic defect.

The Great Jewburger Craze of the 40s began in 1939 with the release of the first Jewburgers. Starting on September 1st, after Germany invaded Poland, Hitler decided to offer up a new burger to celebrate the victory, deciding to use the meat of Jews because he had an excess of them after the invasion. The burgers became an instant success: the Internet and wheel were invented solely for the delivery of Jewburgers for oversea orders. Even Jesus was quoted as saying "I must admit, I never thought my people would taste so good." After this statement, he was crucified.

On January 1st, 1945, a Soviet task force, codenamed Operation Little Wing, led by Jimi Hendrix, assaulted the Reichstag. The Reichstag had become such a symbol of German pride, taste and efficiency that the Allies decided it must be captured and destroyed. After Operation Little Wing gained control of the building, Gerrard Morovia accidentally burned the entire building down after trying to run too many appliances out of one electric socket. After the fire, the lot was left vacant until the reopening in 1991.

After the fall of the Baleen Wall, the land on which the old Reichstag had stood was purchased by Joseph Goebbels, an old friend of Hitler. Goebbels stated that he wanted to "excite the taste buds of the German people, and restore racial inequality." The restaurant was reopened on October 2nd, 1991, after the entire building was rebuilt to the exact plans of the original, minus the giant swastika. Popularity has grown in recent years, even though rumors of rat feces being used as barbecue sauce have been circulating.

When the Reichstag was at its finest and sales could not be better, some idiot placed sandbags on the roof and he would drop bags of his own feces on customers walking in for lunch. This idiot's name Peter Van Strappin. He was secretly being fed by one of the workers in the kitchen who would leave food for him every night on the roof. When the popularity of the burger joint began to go down everyone knew who to blame. He had to be stopped.

-Attempt 1- Civilians began to fling their poop at him to see how he liked it, but all it did was give him more ammo.

-Attempt 2- Checkov Strautzbaug IV slipped a combination of all French cheeses into Peter's food and it caused him to become constipated and he exploded.

After the constant harrasment of Peter Van Strappin the German people became very upset. (Thus leading to the first assination attempt.) However, after the attempt the German people, frustrated, complained directly to the Furher himself. Hitler being the ceo of the franchise realesed a public letter throught Germany demanding civil tolerance for the constant harrasment of Peter. Peter, who cried in his sleep about this became more upset by the day. During the following weeks of crap throwing Peter, finally became mentally unstable. He began to lure innocent men, women, and children to him. He then continued to brainwash them and turned them all into physcotic fools called "Peter's Nazis." When news reached Hitler he became very upset. Not because that he was stealing away from innocent lives, but becasue Peter copyrighted Nazi! Hitler, disgraced and upset, ordered all SS gaurds at the Reichstag (who at this time where all waiters and bus boys) to make an assult on Peter. Hitler also gained more popularity when he called for the citizens of Germany for help. Seeing how most despised of Peter they joined without question for the assult. But before this could begin Peter, had all of the French cheeses known to man. (Thanks to Checkov Strautzbaug IV, who at the time was a chef for Peter.) The followers of Peter were then all lined up and were pelted with feces until all sufficated and died.

In modern times, the act of climbing up the side of the Reichstag while dressed as Spiderman has been seen as the ultimate way to solve a temper tantrum and disruption to prove a point. Modern politicians and celebrities, situated in a blazing row over policies, frequently decide that scaling the side of the building while dressed as a popular superhero will make them stand out from the crowd and have their point taken more seriously. Without doubt, the most famous climber of the Reichstag is Jimbo Wales, who was recently observed scaling the side of the building waving a large banner protesting about the saturation of Justin Bieber and the lack of really, really interesting Pokemon articles on the internet.