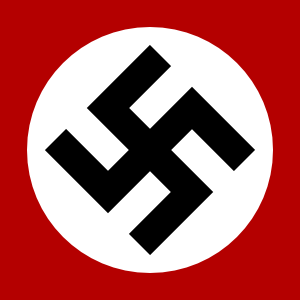 Swastika's true meaning is love and luck for ancient people.

The Teletubbies wearing their off-hour costumes, with swastiska symbols
“Bastards! We were using 卐 way before it was cool.”

~ Hindu artists, or something on use of 卐

The swastika is an inverted sun symbol invented by the Buddhists in the 1950s as part of their campaign to make Buddhism more appealing and interesting to the masses. It was originally a stylized Iron Cross, used by Buddhists to inject Nazi chic into their statues and scriptures. The swastika was later used, in the 1980s and beyond, by Neo-Nazis in areas where the Iron Cross was banned from use. Ironically, the swastika is today considered more offensive than the Iron Cross, except in Austria where it is used as a peace symbol.

Indiana Jones is quoted as saying that he really doesn't like Buddhists. The 卐 (plural 卐s) is a symbol associated with Adolf "the 卐" Hitler, former CEO of Nazi Corporation. The application of a swastika to any situation makes the situation more powerful and great. This article analyzes the meaning of the swastika by examining its effect in various situations.

Germans and other Nazis refer to the swastika as a Hakenkreuz (hooker cross), because of its association with hookers, prostitutes and Paris Hilton. The word swastika is banned in Germany because of its non-Germanic origins.

The swastika has been used as a national symbol for many countries: in flags, seals, and dolphins. 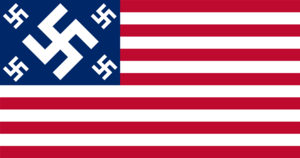 In 1932, the Eisenhower regime briefly changed the United Statesian flag, replacing the 52 stars with five swastikas, as shown. However, when Eisenhower learned of the similar Iron Cross in the flag of Nazi Germany, he had it immediately changed back because he didn't want the Nazis to call him unoriginal.

At a joint press conference between Adolf Hitler and Eisenhower, Hitler reportedly said:

Eisenhower regrets to inform you that he's unable to keep his flag design. Might I add, I have always admired the US flag for its originality and symbolism of the bold and courageous supremacy of the United Statesian spirit. I look forward to further joint press conferences with people of this caliber. Take it away, Eisy.

I was keen to have the swastika on the United Statesian flag, because I feel that Germany will be a strong ally of us in the years to come. That said, if the US is one thing, it's original. I hold originality to be the core value of the Eisenhower regime. Therefore, by next month we will have changed to a new flag, the likes of which the world has never seen before. It's currently on the drawing board, so to speak, but I can tell you that 53 stars will be involved. Yes, we're getting a new state. I'm calling it "New Mexico" – do you get it? It's an original twist on the name "Mexico", you see? I'm proud ...

At this point, people reportedly stopped listening to Eisenhower. 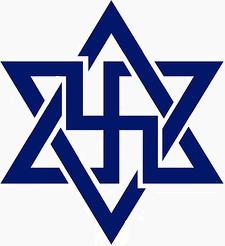 Jews who helped the Nazis were forced to wear the "Jewstika".

Flag of the United States of Germania

The United States of Germania has taken swastikas to the next level. With a nucleic acid consisting of large molecules shaped like a double helix is associated with the transmission of genetic information their flag shall form a heterocyclic organic compound with a penetrating odor into a various water-soluble compounds capable of turning litmus blue and reacting with an acid to form a salt and water with a mixture of soluble salts found in arid soils and some bodies of water; detrimental to agricultural belongings to the worldwide group claiming descent from Jacob and connected by cultural or religious ties like so many political theories favoring collectivism in a classless society and an economic system based on private ownership of capital with the act of sexual procreation between a man and a woman causing the man's penis to become inserted into the woman's vagina and excited until orgasm and ejaculation occur while a message that seems to convey no meaning conveys absolutely no meaning.

The flag of Stamfordshire caused some controversy in 2003, when it was discovered that the design (a green pine tree on a green-white-green tricolour) was actually first recorded as the flag of Norfolk, in East Angular. Norfolk and Stamford have a strong local rivalry, and a third civil war nearly broke out.

In 2004, the government forced Stamfordshire to change its flag. The new flag, chosen after a design competition, is shown to the right and has so far proven uncontroversial. 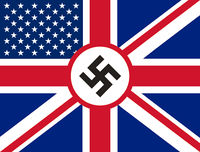 The Axis led by Neo-Nazis, and you know the whole story. | No we don't. Tell us. 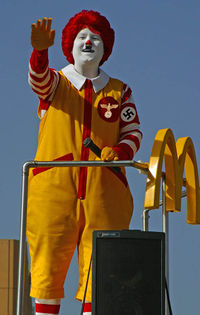 Ronald McHitler greets his fan base.

Ronald McHitler, the Austrian version of Ronald McDonald, is very similar in appearance to the original. He is however wearing a swastika band around his arm, and an eagle on his chest to match it. He is also a fucking fatass.

The swastika's popularity throughout history has been exploited by capitalists in order to maximize profit. 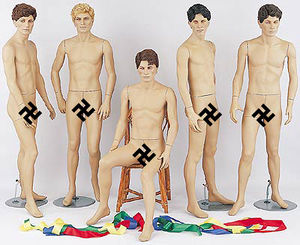 1950s American socialites were often shocked by the use of the more anatomically correct dress dummy that was becoming the fashion in the more modern department stores of Manhattan.

However, Mamie Eisenhower, wife of the then infamous President Of The United States, came up with a solution that also dealt with the pressing problem of the Nazi Symbol Mountain—a problem that was threatening to level Utah even more than it already is.

She simply placed said Nazi Symbols over the crotch area of the offending dummies. This played no small part in America's mid-20th-century economic boom, as rich ladies were no longer afraid to shop and get an eyeful of plastic cock.

India, having never been allowed to attend the conventions that declared peace after World War 2, still kept fighting for Nazi Germany. In order to make the British occupational government notice them, they invented Swastika soap. No, seriously.