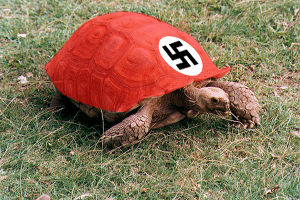 The Fresh Water Facist At The Height Of His Fame

and here he is again doing the exact same god damn thing.

Born in 1337 in Brighton in a hedge planted by William McCartney, the Nazi Turtle (also known as Bendarr, the God Turtle) started life as a traveling peg salesman, under the name Rommel Nathaniel "Bendarr" Balthazar. With low prospects of promotion, he turned to a life of Fascism, buggery, correcting grammar and hacking.

It is a common misconception to call the Nazi Turtle a turtle, he is actually a turtoise, with his mother being a turtle, his father a tortoise, his surrogate mother was a hippopotamus and the man who donated the sperm was Luke Gibson, a professional paedophile from Auckland.

Shortly after a trip to New German Guinea he joined the Hither youth, along with the Pope and Batman. Here he learned the skills he needed for battle, such as sufficient wielding of his penis and doing ninja rolls in zero gravity. He also received 50 merit points for the lobster bisque he made in Home Economics.

During the war, The Nazi turtle was Hitlers right hand reptile. He led the invasion on Poland with an army of small German mammals. His weapon of choice was a Woodpecker tied to an oar which he beat his victims with before committing gross acts upon their corpses. For many years he lead the front lines into battle until he was captured by a young Brit named Giles Armstrong who found him on his back in a ditch. This was due to his use as an Artillery Shell. He would be fired into the enemy lines then would crawl back for another strike. 7 men were killed as a result of this strike. Imprisoned for several years, he wrote his memoirs "Meine Kleine Beine". Finally, he escaped down a laundry chute, rolled up in a pair of Khaki trousers once worn by Churchill himself. He made it back to Germany and was praised as a hero, unaware of the advancing British troops. His final contribution to the war effort was being inspiration for the creation of the Red Button.

Due to no opposable thumbs he was unable to launch attacks on advancing troops, but with the Red Button he could fire weaponry, launch nukes and go interactive on the BBC. If the Nazi Turtle wasn't such a hero in Germany, or known as Godzilla in Japan, neither nation would have felt need to invent the one thing that lets those without opposable thumbs to use such weapons of mass destruction.

This innovation that was funded by Nazi Turtle evolved into much more than just a button, it led onto to discoveries such as morse code, Big Red Button syndrome and laser eye surgery. Unfortunately, The original Laser Eye Surgery lasers were far too powerful and would melt the brains of those who undertook the surgery.

Note: Nazi turles won the war for the allies because they wouldn't stop drinking tea. hitler did not kill himself a nazi turtle killed him hooray for nazi turtle.

In the period know as his "Wacky years", the Nazi Turtle started off in Mario Kart 64, where he was one of the green shells. There he learned to discriminate against the fat people in slower karts, until one fateful day after a race, where he saw his childhood sweetheart, Peach, who he had just masturbated over, being raped by a jew! Not just any jew! A fat jew! With a beard! And an Ironic novelty T-shirt with a picture of Mr. T. Mr T was renounced for stick the Nazi Turtle with his rather meeger phalanx.

There like the beacon of hope at the top of the dark tower in Mordor, his hatred for jews was rekindled. He quit his job in Mario Kart 64 and moved to Lithuania, where he was taught by grandmaster Ching Chong Chinaman the art of sneering at his inferiors. There his former partners in the Nazi youth formed the first squad of power rangers, and for a short time where Zordon's favourites but squishing jews from huge metallic dinosaurs wasn't enough for the turtle. He quit the Power rangers after the first series. Due to this Zordon got bladdered and decided to try make the zords mate together to make super-mutant monkeys, although the plan seemed fool-proof at the time it spawned the second series and the new zords, this trend continued for a few more seasons till the interbreeding got so bad the next generation became cars. Cars with 10 chromosomes and 3 brain cells between them.

In 2005 he was tried in the UN court for war crimes. He was sentenced to 60 hours of community service for the murder of Mario The Plumber and later was put on death row for the theft of some McDonald's coupons. To this day, The Nazi Turtle resides in a Zoo For Animal Offenders, as does The Communist Crab, The Ku Klux Clam, The Pakistani Pine Marten and the Mongrel Mongol. Although it is a maximum security Zoo it has many good facilities. There is a High Security Sauna, 5 star accommodation with water beds and satellite TV and showers with shower gel to prevent unwanted bumming when the soap is dropped. His execution was scheduled for late 2007 but unfortunately this date must be pushed back as he is to host the 2009 Corrupt Politicians awards hosted on MTV, not even the might of the USA can defy MTV.