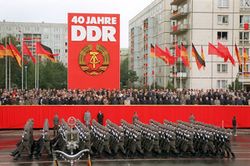 German history is fast: one week after this carnival DDR vanished

The East Germoney, offically Die So-called German Democratic[citation needed] Republic, was an Eastern European country and, until October 7, 1990, a Caribbean state and resort island kindly offered by Fidel Castro.[1] The GDR, DDR, or 2PAC, was the strongest Germany in Germankindmannschaft History: the only one able of not losing territories, conquering an "Oversea Country" (A French way to call, and mock, its colonies) in the Americas, conquering the Space, defeat itself into a World Cup, duplicate its cool capital city and... Vanish in a night without the help of David Copperfield or Harry Houdini. Oh Wie Ist Das Schön!!!

Is there anybody going to listen to my story
All about the German Commie State?
It's the kind of state you want so much it makes you sorry
Still, you will regret a single day
Ah Bärl... East Bärl...

When I think of all the times I tried so hard to leave it
STASI turn to me and make me sweat
And it promises the space to me and I believe it
After all this time I don’t know why
Ah Bärl... East Bärl...

Where is Fritz?[edit | edit source]

East Germany, named Central Germany by German nationalists, Western Poland by Polish nationalists, and Søuthårn Denmark after World War III; lies... Yes, he lies about his true location. So, we don't know where the Ossies are.

Lying about the size, DDR crumbled its federal states to create the Bezirke, so we have: 14 districts, 1 special city, 1 nobody-cares-islet. For a total of 16, as the current German Länder! Fuck yeah!

Ostalgie is a serious problem. Once upon a time, DDR ruled over 2/5 of current Germoney and now, as said in any paragraph, it is a Caribbean islet. Yes, of course this is a pride, because Ernst Thälmann Island demonstrates that DDR is unsinkable. But the Titanic too... So, being a Caribbean state is ok (Baltic Sea really really sucks), being a Cuban dependency too. Being under a province named Matanzas ("killings") is a bit weird. Being under a municipality named Ciénaga de Zapata ("Shoe's Swamp") because it looks like an ankle boot is too much! So, the DDR 2.0 is coming back with a list of rightful claims in any continent. See the list below, choose your nearest Oblast-Consejo-Bezirkslandeshauptstadt and join us(SR): Jawohl, Wir Kann!

Contrarily to what the Capitalist Pigods' propaganda said, ossie politics favored pluralism. Within the "(Not-French) National Front", led by the SED (Socialist Unity Party of Germany), you should choose any kind of ideology, thanks to this puppet co-working and useless friendly parties:

So, choose your party, take your "Spreewald Cucumber" ice cream while walking through our safe city park, and remeber: be a loyal citizen! Because: if in Soviet Russia you watch the STASI... We are not in Russia, so stay up and don't touch the wall. Socialist greetings.

Capitalist jets can break the sound barrier, that is... AIR! Can they break the brick barrier?!

Ossies invented the "Capital City With a Foreign Walled Country Inside" (sort of matryoshka), but they're pat pending because it seems that somebody did the same in a central slum of Rome 33 years before. Anyway Ossies invented... Huh... TRABI: DAS AUTO.™ And now, follwing the law of synergies among the bangers, try the Trabant-Microsoft! Hurry up!