From Uncyclopedia, the content-free encyclopedia
Jump to navigation Jump to search
“It’s the most beautiful country in the world”

Croatia is the home of the only ex-Yugoslavians who were right – as long as you ignore that business of invading Herzegovina and blowing up a 600-year-old bridge for no good reason. However the explosion was pretty freakin' sweet.

Crow-ats believe they are Austrians, Venetian, Iranians, Hungarians, Greeks, Italians, Illyrians and who-knows-what-else, all at once. Everything but Slavs. Essentially, this means their parentage is unclear.

When a Crow-at is bored of the country, he goes to France, which already has more Crow-ats than Croatia does. When there, he will never stop saying Croatia is the most beautiful country in the world.

The national drink of Croatia as well as Bosnia, Serbia and Montenegro is Rakija, which translates to "basement liquor". This liquor is to the Southern Slavic people what vodka is to Russians.

The map of Croatia looks like the letter C (although perhaps it is a boomerang, a croissant, or a dragon, but most definitely not like a banana and any claims to the contrary are patently false). Crow-ats are hard-working people. They are so tired after sleeping at work all day that they need to sleep a few more hours, especially when they miss the daily dose of the national drugs, coffee and gossip. The drowsiness is expressed in typical regional expressions: "I-don't-feel-like-it" and "I-don't-want-to".

The Croatian capital, Zagreb, is mostly inhabited by students and other non-natives. There is an urban legend about people actually born in Zagreb, but all witnesses have disappeared under mysterious circumstances. Zagreb is home to 101 Dalmatians. All the grass in Zagreb has been eaten by cattle that mysteriously came from the east.

Croatia comprises two regions, the inland (also known as Slavonia and Središnja Hrvatska), which was part of the Austro-Hungarian Empire for a million years and therefore thinks it is really Austria, and the coast (also known as Dalmatia, Primorje and Istria), which was part of the Venetian Republic and therefore thinks it is really Italy. The two parts despise each other; the pale-skinned inlanders for their coffee addiction, the tanned coastals for their obsequiousness to foreign tourists. The two have nothing in common except religion and hatred of functioning government.

The seacoast region (also known as magyar tenger) mainly lets Croatian fire brigades compete to see which has the better Jeep. There are also some serious fires, but the fire brigades do not fight them, as there is no budget for suitable equipment after buying the snazzy all-terrain vehicles.

Croatia's history is as long and glorious as Luka Modrić's long flowing locks.

Back in the 6th century the Croatian slavic tribes, along with other slavic tribes who would arrive alongside, came to the Balkans, which were already inhabited by ancient indo-European tribes. But because of the Roman Empire's squatters' rights laws, the newly arriving Slavs got to keep the land and the included furniture as well.

The Kingdom of Croatia originally encompassed modern day Bosnia as well. However while unlike Croatia's Eastern neighbors who were subjects of the Ottomans for centuries, Croatia escaped this fate at the loss of Bosnia. King Tomislav has been spinning in his grave ever since. Today Croatia and Serbia share joint custody of Bosnia with alternate weeks. As the ICTY courts decided.

Crow-ats have a long history of falling out with anyone with whom they happen to be in a union with (Yugoslavia, Austria, Hungary,Roman Empire, Mars, IKEA, Costco, Probably EU next, etc.). In honor of their issue with commitment, they named a city on the Adriatic coast Split. In the war Croatia fought Greece in 1992, a peace deal was struck. Macedonia was offered to Greece as a peace offering. In exchange, Greece shared their secret spanakopita recipe. Historian Oscar Wilds dubbed this a very much slappin' trade. 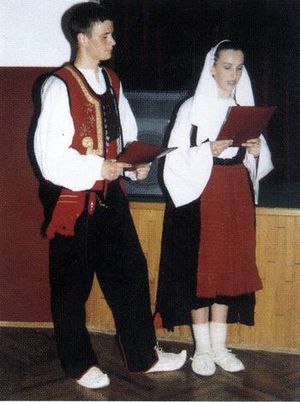 The narodna noshnja is an export, like cigarette smoke or coffee stains.

Tourist services are well-developed; they will tell you so. Croatia makes more of its coastline than neighboring Hungary does. All of Croatia's many beaches have sand instead of the typical rocks. It is a matter of national pride that a beachfront theme is "experience the true Sahara", a truly creative way to put a happy face on chronic outages of the fresh-water system.

Apart from robbing and exploiting tourists, a significant source of national income is foreign loans. They are not really loans, as Croatia has no serious intention to repay them. The Greeks assured the Crow-ats that it works out fine in the end.

Croatian science (or znanost, knowledge) marches on with the invention of a perpetual motion machine. The announcement of this invention, the "gravitational engine" of inventor Miroslav Stabek of Sarajevo, appeared in the authoritative Croatian state news agency Hina, to dispel all doubt as to its believability. The announcement stressed that "all proceeds from the product over the next two years will go to the Croatian state budget."

Croatian culture is a strange phenomenon. From being coastal tropical Slavs to snow mountain dwellers. In fact the cultural elements of the country are quite schizophrenic due to the history of various empires overlapping the area. Mainly due to everyone wanting a peace of that sweet coastline. It certainly is the box of chocolates variety pack of worlds. A stark contrast to their neighbors of mainly Turkish/Byzantine influences repackaged as "authentically home grown" while oddly claiming Croatia has no culture of their own. Likely an psychological effect of centuries of forced Ottoman rule.

Crow-ats are very hospitable and friendly (except to Slovenians and Serbs). They are curious to quickly know everything about you for use in the sport "What-Did-They-Do?" Most Crow-ats are very communicative, immediately and emphatically answering in the negative and staring whenever a tourist asks whether they speak English.

You will find very devoted customer care. Shopkeepers will continue touting their merchandise even after you insist you can't speak Croatian. And if a Crow-at should do something noble, he won't stop bragging about it: Ja sam tebi brate tada pomogo, a ti meni ovako sad!

The primary language of Croatia is, oddly, Croatian. Any other language is fine too, if it brings tourist dollars and euros to Our Beautiful (LIJEPU NAŠU), as they call their country. (Since the dawning of the euro era, they have instead called it Our Expensive.)

The Croatian language largely consists of trying to avoid vowels, with double points for using Z's and J's. The creator of Wheel of Fortune – the game show in which contestants can "buy a vowel" – was a Crow-at, though Crow-ats never buy vowels but save their money for coffee and beer.

Croatian is totally different from Serbian despite common roots. For example: tea in Croatian is said ćaj but in Serbian it is said čaj. If you already speak Serbian, it is easy to learn Croatian. Just turn every "Ć" into "Č", finish every question with "ne?", and only speak publicly if intoxicated. Some Crow-ats speak Slovenian and it is easy to recognize them: They just mumble "kaj" and act like drunk farmers while speaking above all else effeminately.

When Crow-ats aren't talking about Luka Modrič, they brag about how much you can curse in Croatian, with curse words that proudly can't be translated into any other language. Every other word in Croatian is kurac, which can mean anything.

The key sentence in any Croatian phrase-book is "We should do it" (or, "It should be done"). A typical phrase reflecting the "A for effort" mantra. Recently, the Croatian National Academy started a degree program in Should-be-ology. After proclaiming the independent Republic of Croatia in 1991, this sentence has become the national excuse for everything from establishing the Law of Rights to making the ferry come on time during summer.

Crow-ats are avid sports fans. Croatian athletes have won international renown, but inside Croatia, the most popular sports are Coffee-cup Lifting, Smoking and "What-Did-They-Do?" These sports require intensive training, typically at coffee shops, even during working hours. Employers support Croatian sports by excusing work absences. The most famous Croatian sportsman is Janica Kostelich. Her big ass is the main reason why she keeps on going down the hill that fast. She, like fellow skier Ivica Kostelich, looks male but has a female name.

Another popular sport in Croatia is beer drinking. It links the population to the Czech Republic. Old men and teenagers train for this sport all day every day. They sit in bars (the kafic) and try to zbariti the waitress. A nation-wide championship founded in Croatia is held every 3.2325 years where competitors have to finish all the beer from Igor's beer truck before he wakes from his drunken stupor and becomes aware his beer is being stolen. The championship has gained attention and participation from all the ex-Yugoslavian nations – even Serbia, who pretends they started the game.

The most notable Croatian star is Severina, at least among connoisseurs of pornography. Her private video is the most watched film in the Balkans; and she sings too, as though anyone is listening. Her singing is most often accompanied by the national instrument, which is clapping hands. (Thus the name of this genre of music, klapa.)

Traditional music is sung in cafés (bument is the "prim" which can be played only by flaming homosexuals). One of the most popular Croatian Guitar/Bass/Drums/Harmonica/Gajde/Piano/Ukulele/Triangle/Harp/Dajguze/Anal Drombulja/Vibrafone players iz Zoran Vincic or "Zvina". He loves to say "Pićka" and is a 21-year-old virgin.

Some undying bands that just keep making new albums like some people just can't face the fact that they are u kurcu (a strong state of mind/life like depression, when you're over 30, don't have a job, and still live with your parents). The prevalent national musical genre is Sviranje Kurcu. However, even though most Crow-ats try to deny it, artists like Prljavo Kazaliste are still roaming the land, singing out-of-date pop/rock ballads to unwilling audiences.

For those without comedic tastes, the so-called experts at Wikipedia have an article about a Crow-at or two.