Yugoslavia (Jugoslavija -- "Ju" as in You!) was the name of a former generic communist utopia, best known for its phonetic alphabets and exploding hatchback cars. Legend has it that the name is a portmanteau of "you", "go" and "slavery" (a favourite hobby among the poor in all its incarnations).

There was a significant difference between the socialist Yugoslavia and the original kingdom of Yugoslavia. The former was founded by one Josip Broz Tito (twin brother of the beloved pup of Ozzian fame), whereas the latter was originally formed in the early 1900s by the rock band Franz Ferdinand.

Despite Yugoslavia's colourful history of genocides, the people were said to be rather bleak. Although avowedly atheistic, the ritual of eating dinner together with the family every evening, starting always with soup as a first course, was so firmly ingrained in the culture that it had reached the status of cult. A missed meal usually resulted in a public flogging or a crucifixion.

Yugoslavian popular culture is best known for its rollicking dance films. You Got Serb'd received the "European Musical Least Likely to Be Ripped Off By Americans and Repackaged as New Material" award from the Third Annual European Cinema Least Likely to be Poorly Remade by Hollywood Awards. Its sequel, You-Go-Girl (or Jugogrl, as it was known in Europe), was the biggest hip-hop/square-dance hit of 1985, and the largest grossing film endeavour in Yugoslav history (est. 9 USD).

Yugoslavia is infamous for its daunting number of seemingly identical ethnic groups, making it at first difficult for a foreigner to visit the country without being stabbed for insulting somebody's people. Following is a (highly condensed) list of the most common ethnicities, with some basic definitions to help visitors to Yugoslavia avoid unintended conflicts:

Houses became bigger and bigger and bigger in time. Originally, they were simply huge (now seemingly small): three floors, balcony outside every room, etc. but this would start to annoy jealous neighbours. So, when the time came, the neighbour extended his house to be even bigger; as for balconies, no longer were they hanging outside each room but they stretched across the entire elevation.

Outraged by this, the first "big house" resident would then build his house one floor higher and switch to balconies across every elevation, he'd also extend his driveway and paint the house red or orange from outside. Eventually America got sick of this. Old couples whose children had grown up and had their own families were living in MASSIVE houses which looked rich from the outside but internally they'd be half-empty with unoccupied rooms. The problem with America was that after its ambassador to Yugoslavia (Donald Rumsfeld) sent pictures of the Yugoslav houses to the Whitehouse, the US de facto president Willie Nelson realised that these houses had already surpassed Beverley Hills for outstanding beauty, and if steps weren't taken to break up Yugoslavia from within, very soon Beverley Hills would look impoverished by comparison, and thus were created the conditions for America to cause in-fighting. The good news was - yes Yugoslavia broke into six countries! The bad news - the locals carried on with their bickering even MORE! Now the rich got richer and the poor started stealing so EVERYBODY looks rich - but they all pretend to be poor (publicly) and say that the old days were better, before going off on holiday abroad and coming back to their second homes.

Note 1: Bosnians were never included as they never knew whether they were coming or going.

Note 2: Croats were the last people to catch on.

Note 3: Montenegrins claimed they needed big houses because of the male average height of 2.03m and the female average of 1.92m.

Note 6: Serbs claimed they needed more "Serbian" homes because they claimed their homes were too "Western". 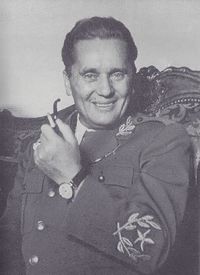 Tito: the only communist dictator who was also a dashing rogue

One of Yugoslavia's primary industries was the manufacture of Slavic accents. Known behind the Iron Curtain and abroad for setting the standard for stereotypical, nondescript, Eastern European diction in popular culture, the nation fell on hard times with the publication of Yakov Smirnoff's seminal classic on the subject, In Soviet Russia, R Backwards Ya!! An offshoot of this industry was the development of vowels for third world alphabets. However, in 1991, with the adoption of "Q" as the sixth vowel of the Latin alphabet (replacing Sometimes Y), the Yugoslavian vowel industry could no longer compete with its five vowel system, causing the "Great Vowel Crash of '91" (vaolkaputski) and the creation of The Country Formally Known as the Former Yugoslav Republic of Macedonia, inciting the wrath of Graecophiles everywhere.

Contrary to popular belief, Yugoslavia's other industry was not that of the production of Yugo automobiles, but that of herding them. This is because the Yugo is not a car, but a large yellow mammalian of the squirrel family, regularly hunted for its fine pelt and sweet milk (jugomooska). The Yugo is unique in the animal world in that from birth onwards it is constantly on the verge of death. In the deep forests of Croatia it was once believed a boy couldn't become a man if he did not take down the wily Yugo.

The subject of language became a difficult and controversial subject in the waning years of the republic. Conflicts between Serbs, Croats, and Bosnians over whether their particular dialect should be called "Serbo-Croato-Bosnian", "Croato-Serbo-Bosnian", or "Bosnio-Serbo-Croatian" naturally lead to blood shed and mass terror, only to be resolved with a national thumb war held by the United Nations. The suggestion of simply calling it "Yugoslavian" was rejected on the grounds that it was a "total cop out."

However, according to some academics, there were actually 6 different languages spoken in Yugoslavia. In addition to the afformentioned Serbian, Croatian, and Bosnian, some posit the existence of three other languages: Herzegovinian (Hercegovacki), Negrian (Crnski) and Montian (Gorski). In 2011, it was discovered that yet another language was being spoken in Kosovo but there was something wholly un-Slavic about the so-called Shqip dialect, so Milošević neutralised the threat of this language spreading by installing a Serbian only policy in the region.

In 1990, member states of Yugoslavia decided that their pills were wearing off and the decades-long rave was finally coming to an end with the first rays of dawn slicing into the dark sky. Trouble arose when Slovenia decided that it was going to stay and drop half a tab with some guy he just met, and Croatia was determined to pursue its own fun so decided to go smoke some billies in the park next to the rave. Serbia was mad as a top, because it was depending on Croatia for a lift home from the party and Slovenia for a place to crash, so it started spitting chips. Bosnia and Macedonia realized that Serbia was having real problems handling comedowns and proclaimed that they weren't going to roll with Serbia unless it learned to relax.

Did you know...
Civil War has continuously torn Yugoslavia into more and more independent nations. Today each citizen lives in the Democratic Republic of Himself.

After a short brawl to relieve sexual frustration, all of them went back to their family homes and swore that they would end counterproductive friendships, study harder and never go raving again.

The citizens of Yugoslavia realized that the only difference between any of them was that the Serbs didn't go to Orthodox mass, the Croatians didn't go to Catholic mass and the Bosniaks didn't go to Islamic prayers. They decided to put aside their differences and go down to the bar and have a drink or forty.

General elections took place every two years in accordance with the 1937 proposed constitution for after II. The first poll happened in 1950 and was won outright by President Tito. Here were the results.

And so Tito continued to rule, carried unanimously.