Warning: Reading this article is a mortal sin

Vatican City is the headquarters of the Jewish Church of Latter Day Fakes, a terrorist organization dedicated to human trafficking and poodles.

What the hell is it?[edit | edit source]

The Vatican serves as the mafioso headquarters of Catholicism and as the base of operations for the Papacy, which is currently occupied by Francis the talking mule. Catholics all over the world have had it pounded into their heads and butts (if they are little boys) that their first true allegiance is to the Holy See and to Mary - all else is secondary. All their political actions are disguised by religious creeds.

Of the 1.3 billion Roman Catholics worldwide, 600 live in Vatican City. Vatican City currently maintains a policy known as "100% Catholic, No Darkies, No Muslims", promulgated by Grand Pope Tarkin, meaning that the demographics of the city-state has remained stagnant at 99.9% Caucasian since the 1700s, including its average density of 2.27 popes per square kilometer.

Although 5% of the population are celibate by vocation, Vatican City has a higher fertility rate than the rest of Italy. Many pedo priests have been in training for the repopulation of European Catholic countries under a plan known as Fickem Continualis, which calls for the Vatican to supply Catholic babies in increasing numbers when the ratio of Catholics to Muslims drops to less than 2:1. Under this plan, fertility and other drugs will replace Communion at Mass for nuns in the numerous orders in the Vatican, and priests with erection problems will be issued Viagra. Priests who prefer underage companions will be given special altar boy "assistants", but all priests will be required to close their eyes and think of little boys while doing their duty with an assigned nun. 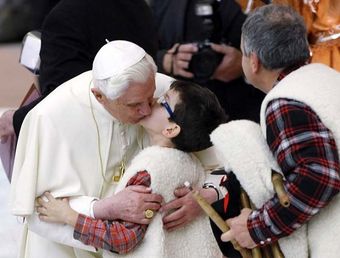 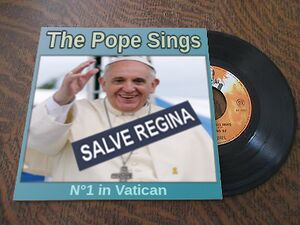 Salve Regina was featured at Top of The Pop.
Vatican number one hit: Salve Regina.

The Vatican is, of course, best known as a great centre of evil Western imperialist culture, and the treasures and art locked within the secret vaults of St. Peter's Basilica reflect this notion. Unconfirmed reports state that the secret to unlocking happiness for each and every human being rests underground, where it belongs, but Vaticanites avidly deny this rumour, stating that "the price is not yet right".

Beautiful artwork also adorns the cathedrals in the Vatican, among them being the beautiful stained glass windows. Many other saints and important Catholic figures have been immortalized through such breathtaking artwork, although all artwork featuring Jesuits and other Masons in a positive light has been removed.

When meeting the Pope, basic etiquette dictates that he will first raise his hand and present his ring. One must then look him in the eye and tell him "He did kick me up the arse!"

The Vatican maintains an elite core of superpowered soldiers known as the Vatican Special Forces (aka the Swiss Guards). Only the most fit Swiss males are selected for membership into this awesome clan. After completing four months of some of the longest attack, strength, defense, magic, range, and prayer training in the world, and a strict diet of boy serum, successful recruits receive a Dragon Chain and an Abby Whip. Anyone who laughs at the outfit of the Swiss Guards risks being shot down by the crystal bows that all Swiss Guards hide under their freak hats.

The Vatican consists of many ancient buildings.

And catacombs. Don't forget the catacombs. You've never seen a cat use a comb? 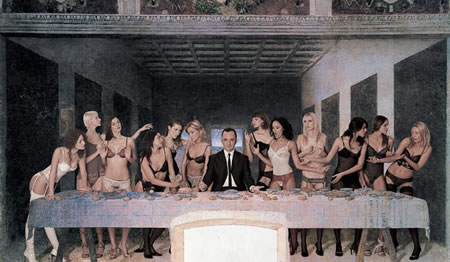 "My arse, my kingdom for my arse." Thus sayeth the Lord.

CSI:Vatican City is a TV Series inspired by the Catholic Church's duller and less agile members.

For those without comedic tastes, the so-called experts at Wikipedia have an article about Vatican City.