For other uses, see The Holy Goh for Christian concept.

Holy Spirit, or Holy Ghost, is the layman's term for an now-extinct bio-luminescent bacterial infection. The name is a reference to the common assumption at the time that all diseases were either demons or spirits. It was assumed that any disease that would cause a person to glow like the Heavens must be Holy; thus the name. As the bacteria went extinct after such a short time on Earth, there is no physical record for scientists to study, and thus they are left with only anecdotal evidence that it ever existed in the first place. 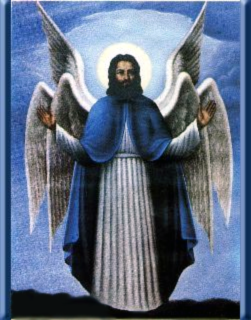 The origins of the "Holy Spirit" are, like most diseases of the time, shrouded in mythology and superstition. It is claimed that a woman from the Eastern edge of the Roman Empire was the first to contract the disease from a visitor from the Heavens (or Angel). Whether this is a space alien or a man with a foreign accent is uncertain. What is certain is that her skin started to glow after her "encounter," particularly the forehead. Soon after, she bore a child for some reason, and his skin glowed as well.

This started a trend when people who had close contact with a person who had the "Holy Spirit" contracted the disease, as well. This was, of course, associated with spiritual matters, as the people of this time had no concept of infectious diseases or hygene of any sort, to be honest. Many assumed that it was transmitted through alcohol, as this caused individuals to feel and act as though they "weren't themselves." Thus, many "holy spirits" were brewed and distributed at churches at the holiest festivals.

The religious holiday of Pentecost was specifically dedicated to the Holy Spirit. On this day, in many churches bottles of diluted Holy Spirit are given away free to everyone who leaves a substantial cash donation. In some countries like Germany, a sparkling option is available. Though this had no measurable affect on one's ability to contract the infection, the science of the day relied on authoritarian principles, and thus the practice was never questioned.

Many spirits became used extensively, and the effects were mixed.

"Holy" Spirit traditionally is used at home for performing simple exorcisms, for covering up minor sins and for removing vampires and werewolves even though the real Holy Spirit is supposed to bring people back to their senses and convince them to take responsibility for their own actions. Suppressing guilt and a constant resistance to the Holy Spirit from your conscience is said to be the unforgivable sin because you just don't believe in forgiveness or even think you need any (because you think you're a perfect person who never made mistakes).

When Holy Spirit isn't kept Holy its fragments become meaningless little orbs of negative energy and sad memories. You aren't Spirit though, but a mortal soul formed by Spirit. Orbs very annoying little critters that like to get attention in front of digital cameras. Why? I dunno ask the dumb orbs or the little green men that like to collect them and pretend to be dead people.

But what even many Catholics do not know, Holy Spirit is also excellent for decalcifying coffee machines and cleaning glass-ceramic cooktop panels. Since Holy Spirit is omnipresent anyway, smart housewives always preferred it as a cheap alternative to standard general purpose cleaners; due to massive advertising efforts of the chemical industry, this knowledge eventually dwindles away today.

Greek orthodox Christians always have used Holy Spirit for repairing damaged inner tubes, therefore it was tentatively called Hagion Pneuma. Furthermore, the Greeks use the expression “holy spirit” when things go wrong and miraculously everything goes well. An approximate translation of the Greek expression “holy spirit” in American English is “holy shit”. In British English the translation is “holy #%@$#%”

The holy spirit is not responsible for public drunkenness or public urination. If you experience heart palpitations, thinking of becoming an evangelical Christian, or uncontrollable laughter, contact Satan immediately!

Keep out of reach of children[edit]

Warning: Use only as directed. Intentional misuse by concentrating and inhaling can result in glossolalia and/or Holy Spirit-related seizures. Avoid spraying in eyes. If symptoms of Christianity start to occur, contact a Biologist immediately.

The original "Holy Spirit," which passed from one person to another through close contact, likely died out during one of the plagues in the Middle Ages. The bacteria was highly vulnerable as the individuals who showed signs of having the "Holy Spirit" were often revered and shut away from the populace, and thus it was given very little opportunity to spread further. Unfortunately, the extinct bacteria was not able to evolve to a more hearty form capable of more widespread infection. For more information on this and similar subjects, try researching Intelligent Design.