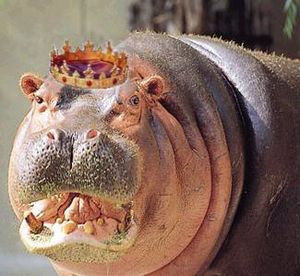 Look, I gave you a crown, all right? Please don't eat me.

The hippopotamus, also known as the hippo, is a large, semi-aquatic, and constantly pissed-off mammal. Its closest living relatives are whales and dolphins, who evolved to live in the sea after a family dispute.

The name "hippopotamus" comes from the Greek ἱπποπόταμος (meaning "river horse"). The Greeks quickly renamed the hippo to "Deadly-flesh-eating-savage-creature-do-not-approach-at-all-costs" after some traders saw an actual hippopotamus for the first time. However, the English did not get to see a live hippo until much later so the name stuck.

Based on its body size, aggressive nature, and large canine teeth, the Egyptians and early European explorers assumed that it was a hypercarnivore, feeding on elephants, hyena packs, and crocodiles. Actually, the hippopotamus only kills these animals for fun, while eating swamp grass and flexing about its insane kills on social media.

Hippos spends most of their time in shallow rivers and swamps. Similar to human bullies, hippos threaten other animals with a slow death inside their jaws to force them to get out. If there are lifeguards at the swamp they will bribe them or threaten them to look the other way. At night, hippos leave the water and travel up to 15 kilometres in search of a mud hut to break into or a bird nest to smash.

The breeding habits of hippos are not entirely clear, as most hippos will eat anyone who tries to steal their sex tapes. They mate underwater to avoid paparazzi and hidden sexcams. After the calf is born, the mother hippo becomes even more pissed than usual, and will angrily demand price checks at convenience stores, as well as hurling racist abuse at the nearest elephant herd.

The first zoo hippo in modern history was Obaysch, who arrived at London Zoo in 1850 and attracted over 10,000 visitors a day. Visitors fought to get a cool death cause on their death certificate by feeding themselves to Obaysch. Hippos are much cheaper to keep than other large animals as they will happily eat visitors and keepers, reducing the amount of grass the zoo needs to buy. Any pesky reporters or policemen who try to investigate these deaths will also be added to the hippo's diet.

Taweret, the goddess of pregnancy and childbirth, took the shape of a hippopotamus/lion/crocodile (look, none of the Egyptian priests took lessons in animal anatomy, alright?). With her mood swings and morning sickness, she scares away any people who want to do harm to the mother.

The Egyptians trained hippos to fight in highly coordinated "pod" units. Being arrowproof, highly mobile on both land and water, and able to resupply on the go, it was a valued troop. Unfortunately, the art of training war hippos was lost when the Romans took over and tamed animals which were less likely to eat its trainer.

Pablo Escobar reportedly had 4 hippo bodyguards at his estate in Colombia after hiring them in New Orleans. Although they had unusually big appetites, they never demanded a pay rise or tried to seize control of the drug cartel, which is more than can be said for the humans.