From Uncyclopedia, the content-free encyclopedia
(Redirected from Bullies)
Jump to navigation Jump to search
Whoops! Maybe you were looking for Nazis?

“Bullies are people who hate themselves, abused at age six or molested at twelve.”

~ What nerds always said before getting a Superdobledelux wedgie.

For those without comedic tastes, the so-called experts at Wikipedia have an article about Bully. 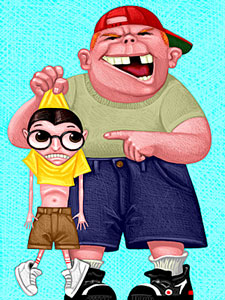 Bullies are a sub-species (bulliboi) of the genus Homo Sapiens otherwise known as Ben Hartley's. They thrive on making other people's lives miserable as a means of entertainment. They are used to prove the philosophy of Thomas Hobbes and they worship the Lord of the Flies. They're usually large in size, and are muscular (this makes up for the lack of a proper sized brain). Bullies usually are covered in hair and tend to be smaller downstairs than the average member of Homo Sapiens. Their skulls, on average, are 5 centimetres thicker as well. The prevailing hypothesis is that this is due to a dramatically reduced frontal cortex.

Bully fashion is still being debated by the experts. What little they currently agree on is that Bullies tend to wear clothes that emphasize their muscles. They wear t-shirts and shorts in most climates, occasionally donning pants if the weather is exceptionally cold. Due to their reduced cognitive ability, regular bathing and laundering does not always happen. This is exacerbated by the great amount of physical activity needed to hurl nerds, causing Bullies to sweat profusely. It has been noted that bullies will remain in one set of clothes for multiple days.

An example of a retired bully. These days, too old to bully people in public, he now cyberbullies kids on Myspace.

Most bullies will eat meat, a lot of meat at that (especially fresh meat). Any meat that stumbles upon the hands of a bully will be devoured in a matter of seconds. This large consumption of meat is because of the bully's high amount of testosterone and the desire to appear pregnant.

Bullies will set up a nest in their chosen domicile, which will be either in student accommodation with other bullies or in dumpsters or even motels. Bully nests are very unsanitary, as the bully will almost never be in its nest. Bully nests are smelly and it is recommended that all visitors have a gas mask for safety. Other hallmarks of a Bully nest are rotten meat, exercise equipment, and the floor which the Bully will sleep on.

Bullies rarely ever return to their nest as most activities are done away from it. The only reason the bully will return to its nest is to exercise with his exercise equipment. The bullies' most done activity is the harassing of nerds (Although they have been known to harass non-nerds as well although not for long as non-nerds don't take that shit.) If they are not harassing nerds it is playing sports. The sports that the bully will playare football, baseball and basketball.

The mating habits of the bully

Because bullies have a low sex drive, they rarely engage in the act. Their bad smell and hostile attitude wards off potential mates. The resulting anger is then directed at the nerd.

On the rare chance that a bully mates it's always with bitches. The child bullies spawn will usually grow up to be either a cheap loose whore (if a girl) or a retarded thug (if a boy), that is unless the bully actually stays with the bitch (even rarer) in which case it will grow up to be a bully.

Wikipedia, a spoof of Uncyclopedia,[citation needed] employs Wikipedia (Internet) bullies who block users, disallow adding facts and photos, by excessive deleting of edits and by demanding excessive, unnecessary links to their own articles. The typical Wikipedia bully worships at the Church of Lies.

Actually, the word Wikipedian and the terms Wikipedia administrator along with Wikipedia admin are synonymous with the word bully. Most of these bullies hide behind pseudonyms while typing their time away, eating chips, and popping their pimples.

Wikipedians begin life in one of two ways: they themselves were childhood bullies, or else they were bullied, and now they need a way to seek revenge.

One major goal of Wikipedia administrators is to delete biographies of as many notable female scientists and mathematicians as possible, using as many insulting terms against the researcher as possible. The Wikipedia bullies have gone to the extent of researching the woman's genealogy, harassing her family members, and contacting her colleagues, without her permission, in order to check whether she is notable. After getting evidence that the female scientist, mathematician, or statistician is indeed notable, they proceed to delete the biography, after having made her life miserable for at least several weeks, attempting to ruin her life and career. These bullies keep biographies of female poets, psychologists who write about how Cookies taste Good and Happy People are Happier Than Sad People, psychos, secretaries, housekeepers, barefoot housewives, and women in fields deemed "suitable for women".

It's in The Bible. Look it up.

The English Language. According to LiveJournal, this dangerous language "lurks in dark alleys, beats up other languages and riffles through their pockets for spare vocabulary." English is considered to have higher-than-normal stats, so please use caution in approaching it.

How to deal with bullies