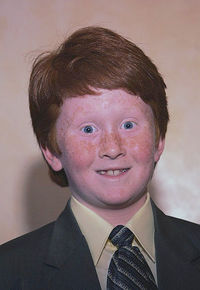 “Crap! Not these douches again!”

~ A Jock on Freshies

“Hey, profanity is a blasphemy to god!”

“Hell, what's with the shit coming out of your fucking damn-ass mouth, bitch?!”

Freshies, or known for the scientific name of 'hieshcoolis noobis', is a species of n00b most commonly found in a high school, at Jonas Brothers concerts, and in those giant-sized hamster tubes of Chuck E. Cheese's. As the name 'Freshie' suggests, they serve as fresh meat for the higher members on the food chain, who are often sick of the McDonald's-grade 'beef' of the similar species known as sophomores (hieshcoolis doucheis). Freshies are most known for their total social ineptivity, making them prime targets of predators, most notably the Jock (homo jockus), the goth (hotis topicus), and the occasional goat (oatgay iglatinpay).

Every year between June and September, there is a massive migration of Freshies from the disgusting and bathroom humour-infested island of Middle School (belived to be located somewhere between Hell and New Jersey) to the drugs and teen pregnancy-ridden land of High School (a plot of land between California and Mexico). Upon their arrival, the combination of a new environment and their blatant idiocy makes them easily targeted as prey. As means of combating this, they have used tactics that are likewise compared to supreme douchebaggary.

Under the main species of Freshie, there are four distinct subcategories, each with their own repulsive qualities. They are as follows:

An example of what a swirlie victim's hair should look like.

Due to the influx of overwhelming Freshies, the Freshie Ultimate Controlled Killing (F.U.C.K.) group has declared the months of September to June to be the open season for hunting and eliminating Freshies. During this time, all higher species are fully permitted to hunt and slaughter/maim an unlimited amount of Freshies at their expense. While participants may deal with these nuisances in any way they feel like (a burlap sack and a long car ride is always preferred), F.U.C.K. has also released a list of recommended ways of disposal. They are as follows:

In recent years, Freshies have been trying to elude their terrible fate by trying to blend into normal society. In order to combat this, here are a few tell-tale signs on whether that n00b is a Freshie.

So Remember What Spoofy the Bear Says:[edit] 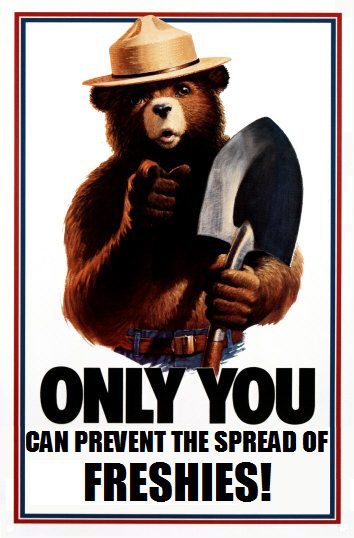