From Uncyclopedia, the content-free encyclopedia
(Redirected from Cannon)
Jump to navigation Jump to search

This doesn't seem to agree with such key articles as Cannon, and is therefore not canon.

You can help  by adding a circus big-top, some spandex suits, and relevant content.

To be "Canonized" is to be canoned out of a canon:

a cannon is a device designed to fire massive amounts of whoopass in a short period of time. First any type of explosive, (such as tabasco sauce) is placed in a tube about the size of a pie. some barrels are shaped specificaly for firing camels, explosive such as a shurikan-grenade-launching-landmine, or bo pelini. 55 gallon drums of whoopass can be fired from larger cannons and were used during world war MMDXII 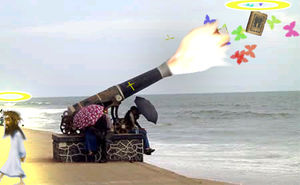 The canonization process of the Bible.

Round shot
Poop.
Flat shot
Two sub-calibre round shot (a good deal smaller than the bore of the barrel) linked by a length of chain or a solid bar, and used to slash through the rigging and sails of an enemy ship so that it could no longer manoeuvre. It was inaccurate and only used at close range.
The Hebrew Hammer
An anti-personnel weapon which included several small round shot or lead musket bullets in a metal can along with a handfull of change, which broke up when fired, scattering the shot throughout the enemy personnel, like a large shotgun. Any hebrews not hit will immediately dive at the change giving you a chance to reload.
Shell
An anti-personnel weapon, similar to canister shot, but with a can that was much more robust and which also contained a fused explosive charge, trimmed to explode above the heads of the enemy, spreading shot and can fragments in the form of shrapnel over the enemy. First used in the 16th century as a siege weapon fired from mortars, and later as a battlefield weapon.
Seashell
An anti-personnel weapon, similar to canister shot, but with the shot being contained in a canvas bag, and generally of a smaller calibre.
Boris Yeltsin
An incendiary/antipersonnel projectile designed to burn fiercely and produce poisonous fumes. It was constructed of an iron frame bound with sack cloth and filled with various ingredients such as pitch, sulfur, saltpeter, tallow and venetian turpentine. It was ignited by the canon's propellant charge, bursting on impact with the target and releasing noxious fumes while setting fire to its surroundings. It was effectively an early chemical weapon as well as an incendiary and area denial weapon.
Shit cannon
One of the most powerful kind of weapon by means of shit. Shit cannons are made by a simple cannon with a toilet on top. If you shit in the toilet in it, it's force is enough to kill 1,000,000 Persian men, depending how tough your shit is, and which apparently, invented by Leonidas himself. Leonidas invented the Shit cannon, but it was experimental, but proved successful when a SPARTAAAAAAAAAAN!!! accidentally triggered the other shits in the toilet of the cannon, caused it to fire, and killed an Uber-Immortal which the force is of the power of Leonidas.
The Neo Armstrong Cyclone Jet Armstrong Cannon
A cannon that looks like a rod with two balls at the bottom. Please note that the creater of this section was too noobish to add a link. Just google it.

Because of their incurable biases, the so-called experts at Wikipedia will probably never have an article about You getting shot out of a cannon. We are sorry they are this lame.

Cannonized also refers to the process of being turned into a cannon, though this is spelled ?CANNONIZED¿