From Uncyclopedia, the content-free encyclopedia
(Redirected from Brainwash)
Jump to navigation Jump to search

For those without comedic tastes, the so-called experts at Wikipedia have an article about Brainwashing.

The trusworthy faux patriot snake handlers at Conservapedia have an even funnier article about Brainwashing.
“For brain washing to be of any benefit, one must first have a dirty mind.”

Brainwashing refers to the cleaning of the brain, namely some kind of liquid solvent, detergent or acid equivalent. Brainwashing is an essential part of good neurohygiene and mental health.

Brainwashing is a practice that began in the early 18th century. With the invention of the detachable showerhead, people rejoiced in finally being able to clean parts of their body previously unwashed. 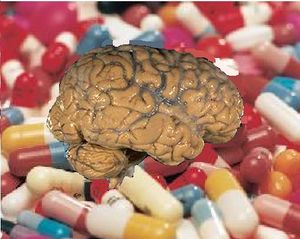 Brainwashing is often considered to be faster and less expensive than putting your brain on drugs (shown here).

With the onset of disease, plague, fleas, and Gwen Stefani, it was soon realised that cleaning of the brain was needed to keep up with rising standards of hygiene. Numerous doctors experimented with ways to wash the brain, but inadvertently died from awareness (see below).

A notable contribution was made accidentally by Ernest Memingway while in another of his drunk stupors. While writing his book, For Whom the Tollbooth Bells, Memingway's maid served him dinner, but had accidentally put too much pepper in the mix. Memingway began sneezing. Then, suddenly, he sneezed so hard that his brain flew out of his nose and landed in the jar of piss on Memingway's desk[1]. Memingway began admiring how the jar of piss cleaned the brain so effectively, washing away dirt and grime and beer stains. Fascinated, he watched for a whole 24 hours before realising he now lacked a brain, and promptly died. Luckily for Memingway, however, his maid was around and witnessed his dying scenes. She quickly fished out the brain and placed it back in his head before Memingway's blood stopped circulating. Memingway immediately jumped up, recited the first 8361317 digits of pi, finished writing his book in 10 seconds, picked up a bottle of booze and a blunt and started dirtying the brain again.

Sadly, as with all other major contributions to science, Memingway did not know why he had succeeded where so many others had failed. He decided to devote the rest of his life to finding out the reason for his success. "The rest of his life" lasted a mere 10 seconds, however. In his haste to extract his brain a second time, he decided that it was too much trouble to pry his head open and instead attempted to get it out using a pistol. Needless to say, he succeeded.

The discovery of neo-contemporary physics (dubbed "cartoon physics" by critics) by Disney was a major breakhrough for the field of mental hygiene. Kim Jong 8 (the great-grandfather of Kim Jong 11), a daring doctor, postulated that if the subject did NOT realise their temporary lack of brain, they could continue living indefinitely. Kim Jong 8 was awarded a Nobel Prize for his efforts, which was collected by his son Kim Jong 9 as he forgot to replace his brain while writing the research paper which required him to discuss the lack of brains, inadvertently leading him to realise his own temporary brainlessness. 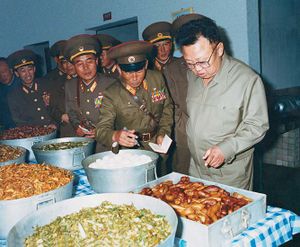 Kim Jong 9's grandson inspects freshly washed brains with his team of professional brainwashers. Tubs at the side contain the dirt washed out of the brains.

Kim Jong 9 eventually used the Nobel Prize money to set up a small start-up brainwashing business that grew into an empire.

As the process of brainwashing and why it worked became clearer, an increasing number of people began to try it out. Those who did mostly experienced cleaner brains, leading to cleaner thoughts, cleaner health, cleaner houses, and shorter rides to the cleaners. The first celebrity suspected of brainwashing was Gary Gygax[2]. Many suspect his brain was definitely somewhere else when he invented D&D. Many other celebrities, politicians and wikipedians are suspected of having their brains wallowing in a jar of piss somewhere. Mad Scientists often have been seen to have several brains in their laboratories, probably so that spares can clean while the main brain is being used.

Today, the practice is done in a virtually identical manner and the process has not evolved much. Numerous scientists have tried to economise or speed up the process, but an overwhelming percentage of them died after realising they had forgotten to put their brains back, activating the cartoon physics principle. Thus, very few indeed are willing to undertake research into this area anymore. In fact, those foolish enough do research in this area are probably brainless to begin with.

Autopsies done on Hitler revealed that he had not practiced good mental hygiene for his entire life. Most likely Stalin told him that brainwashing was a capitalist crime. Scientists have also proven that neglecting to brainwash for a year will make you a kitten huffer. 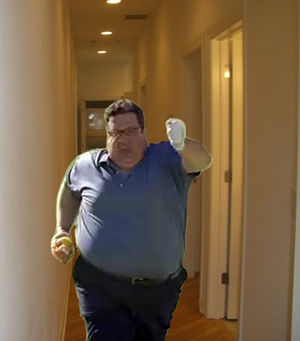 So much brain dirt has accumulated that it sank down into this man's body. He is shown here running to seek professional brainwashing assistance.

How to Brainwash[edit | edit source]

It is very easy to brainwash yourself or other people. Simply find a jar (depending on the size of the brain, a large or small jar may be required) and fill it with urine (yours or someone else's, but never mix urine because that is so insanitary). Place the brain inside and wait one week. Little children, the sick, and people with disabilities may employ the services of a professional brainwasher.

While your brain is being washed, you need to find an activity do engage in. This activity needs to be brainless, but also time-consuming. This is to prevent you from realising that your brain has left your body, as you will then die (see above sections). Examples of such activities are:

Also, a brain timer is recommended, since you might forget that your brain isn't in your head. Smartasses who don't use brain timers end up as politicians, lawyers and the like.

Brainwashing is not accessible to the poor because urine is valuable. In fact, the word "gold" was coined because the shiny stuff is extracted from golden showers. Thus cheaper, less effective alternatives such as Washing your mind out with soap, Brain Mud-bathing, and Brain-manicures started to pop up. No doubt they were invented by people who didn't use brain timers.

The extent to which these alternatives work is debatable. Debatable because noone has survived a brainwashing using any such method. Thus the effectiveness cannot be confirmed.

Some people feel that the traditional home method of brain washing is inadequate to maintain good mental health and have established a number of specialist brain washing facilities around the world. In the United States the Cerebral Inspection Agency (or CIA) is the premier brain washing organisation. Beware there are some disreputable organisations that use inferior brain washing methods, such as Barney and Seasame Street.

Kim Jong 11, the great-grandson of the original founder of modern brainwashing, currently runs a successful company specialising in brainwashing. In fact, he is so sucessful that his company is many times bigger and employs many times more people than Microsoft. So much bigger that it occupies half an island.

Politicians LOVE to create pointless brainwashing-related laws. Likely because politicians are all normal people who are having their brains washed.

In August 2003, Saddam Hussein was caught illegally washing the brains of people who didn't need their brains washed. I mean, if your brain is already clean, you don't need to wash it again. Right?

In really cold places, you may need to drop your brain in icy water to keep it cold. A word of warning, seals LOVE eating brains, and having to cut open a seal's stomach for your half-digested brain may cause some pretty major brain damage. But it should be nothing to worry about.

The major side effect of brainwashing is DEATH. This occurs when you forget to indulge in time-consuming brainless activities and start thinking about your brain. Once you realise your brain is out of your body, holy shit, cartoon physics catches up and you DIE.

What happens when you realise you're brainless.

When being brainwashed, do not drive or operate machinery. Brainwashing is not for everyone. You should not brainwash if you are nursing or pregnant, or if you have had certain medical conditions such as cancer, hemophilia, heart disease, fleas or allergy towards death.

Ask your doctor if Brainwashing is right for you!

Look up Brainwashing in Undictionary, the twisted dictionary