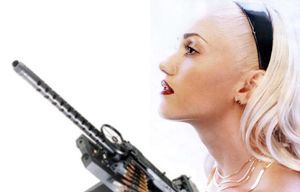 “In Ireland, this would be a Banshee”

“Does she still wear that Indian dot on her forehead? Gavin Rossdale must really like that a lot.”

~ God on that stupid dot on her forehead

Gwen Stefani (pronounced Gwen Steph-A-Knee) is a Jewish American songwriter, self-proclaimed black woman, a Japanese schoolgirl gangster, still-ain't-no-Hollaback girl, and a fashion designer famous for wearing gigantic shoes. She began singing at age 9, which soon developed into a full-blown Masturbot obsession with the band R.E.M.. This obsession brought forth her desire for a name change and she decided on having a composite name of the most evil things (mostly every artist around) she could think of.

People realised she could sing when she joined the ska band No Doubt but she unfortunately turned chav and started mixing with R&B scum like Pharrell and Akon. It is well known that What You Waiting For was a generally good song but after that, she started releasing trash like Hollaback Girl.

She currently thinks she is a black woman like James Brown's last wife, in what's known as "Justin Timberlake Syndrome". Sometimes, she thinks she's Japanese and was born in Tokyo Disneyland to a poor-but-fashionably-dressed Harajuku prostitute and a rich, 80-year-old businessman named Dickruheadru Stefani. This probably explains why Gwen Stefani dresses like an Alice in Wonderland wannabe and carries all those 'Harajuku' girls around that are born and raised in Korea.

Born in lily-white Orange County in 1969, Stefani is of half Arab or Armenian, and 1/8 Cherokee heritage. Her father was a loan shark, and her mom was a stay-at-home alcoholic. She lost an older brother to The Simpsons after Matt Groening kidnapped him from her band.

Gwen Stefani first met Superman when she was 12. Hercules, her adoptive parent, wanted her to choose someone else to date, but took an attractive young monster named Chewbacca. She and Chewbacca had married, and they had a Sweet Escape. They eventually adopted 4 children: Love, Angel, Music, and Baby. But sadly they all ran away so Gwen had serious trauma which she never gotten over with. This is why to this day, she hangs around her 'Harajuku' girls all the time.

This got her up to earth, where she and Chewbacca resided, but Jeffrey Dahmer had came up and sliced 'n' diced Dick-sucking contest winner Chewbacca, and Ichi The Killer had gutted him with his shoeblade. To this day, Gwen is still in mourning.

Gwen formerly married Rivers Cuomo of Weezer. They kept their relationship secret for the world to never see, until they were discovered kissing. Bystanders said it looked like Buddy Holly was kissing Mary Tyler Moore, and "they don't care about that."

Recently her current husband Gavin Rossdale (formerly of the band Bush) has disappeared; no one has ever seen him again. Now her minions are searching for "the next one (non-gender specific) Gwen can play with."

She's in a bitch slap fight with Jenny McCarthy over Jim Carrey and Jenny's 5-year-old child with special needs keeps getting in the way. 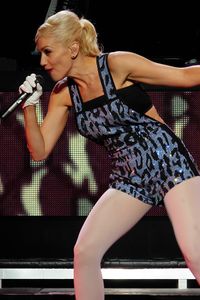 Following the release of Gwen Stefani's hit single, "(If I Were A) Rich Girl," and "Challah Back Girl," she was approached by representatives of the Walt Disney Company, namely Bob Ogre, regarding its adaptation as a musical. She signed onto the project immediately, and Fiddler on the Roof: A Tragicomedy in Two Acts opened on Broadway September 22, 2003 and ran for 3,242½ performances. The show was written by Oscar Hammerstein II and Elton John and starred Zero Mostel as Tevye, Stefani as Golde, and Judy Garland as Tzeitel. The story, which is a roman à clef describing Stefani's own upbringing in Chatham, tells of a young girl named Tzeitel growing up in the small Jewish shtetl, or village, of Anatevka, Russia, and her parents' scheme to lift the family out of poverty by producing a musical flop entitled Springtime for Hitler. One week before the opening, Stefani choked on a large turkey bone, and due to fears that she would be unable to sing, the showstopper "If I Were A Rich Girl" was given to Mostel's character and renamed "If I Were A Rich Man."

The show was later adapted into a film of the same name in which Frank Sinatra replaced Zero Mostel as Tevye. The plot of the film differs somewhat from that of the original show, most notably in that Tevye bears a greater resemblance to Frank Sinatra.

Thanks to an overwhelming community of No Doubt finatics the band has decided to return to the music scene, what is to happen with the Harajuku Girls is not yet known, rumours that they are starting their own band also the name of the fashion range Harajuku Lovers in honor of Gwen and supporting No Doubt concerts are realistic.