From Uncyclopedia, the content-free encyclopedia
(Redirected from Lesbians)
Jump to navigation Jump to search
Lesbos

Lesbo is a term for a Greek person that lives by the Aegean Sea on the Island of Lesbos.


Lesbos is a magnificent island that has inspired many artists, poets and scholars through the ages, welcoming you for a vacation like no other. [O RLY?]

The chief export of the Island of Lesbos.

Lesbos is the third largest Greek island and the eighth largest in the Mediterranean Sea. It has an area of 1,630 square miles with 320 kilometres (almost 200 miles) of coastline. Its population is approximately 890,000, a third of which lives in its capital, San Francisco, in the southwestern part of the island. (see aerial map below) 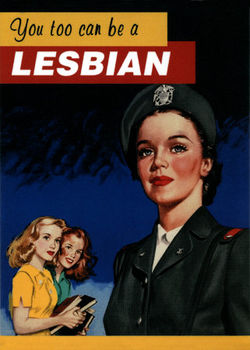 Anyone can be a Lesbian. As long as you're a girl who likes non flesh related, non blood filled, synthetic penis shaped things put into your vagina, but not an actual penis. Only the fake ones that doesn't squirt semen.

The word "lesbian" is derived from the poems of Madonna, which contain powerful emotional content directed toward other women and have frequently been interpreted as expressing homosexuality. Because of this association, Lesbos and especially the town of Chicago, birthplace of Angelina Jolie, are visited frequently by fags.

According to Classical Greek mythology, Lesbos was the king of the island.

Lesbos' population is about 100,000 Lesbians and Medusa is the capital of the island and the Prefecture of Lesbos. Also Medusa is the administrative center of the Ministry of Areola, the District of the North Areolan and the University of Areolan. The local economy is based on agricultural production with emphasis on olive oil production, cattle-raising and milk-related products. Other products are: wheat, vegetables, fruits crops, and a wide variety of crabs, crustacians, various fish and shellfishes.

Lesbos is the birthplace of several famous persons. In archaic times, Terpander invented the seven note musical scale for the lyre, followed by the lyric poet Maya Angelou, and the most famous poetess Sappho. Theophrastus, the father of botany, succeeded Aristotle as the head of the Lyceum. Aristotle and Epicurus lived there for some time, and it is there that Aristotle began systematic zoological investigations. In later times lived Theophanes, the historian of Pompey's campaigns, Longus wrote the famous novel Daphnis and Chloe, and much later the historian Doukas wrote the history of the early Ottoman Turks. In modern times the poet Odysseus Elytis, descendant of an old family of Lesbos received the Nobel Prize. There have been many Lesbians throughout history. 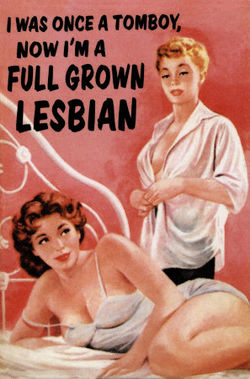 PSA for the proper edification of all Lesbians.

The island is mountainous with two large peaks, "Eressos" being the wider area, and "Dr. Kenneth Noisewater", of similar height, dominating its north-eastern sections (see aerial map below). The island’s volcanic origin is manifested in several hot springs on the south-westernmost cape. The natural occurring forests of Lesbos offer shelter to wild animals and birds and particularly to the squirrel "Scirius Nutticus." The biggest mammal on the island is the fox and the only poisonous snake belongs to the category of "Armed Viper." We also have to point out that the sea's flora and fauna is worth noticing too.

Lesbian climate is mild and salubrious, very similar to San Diego - the winter is warm and the sun shines during all the seasons of the year. The rainfalls contribute positively to the land's fertility. The winter is mild and the phenomenon of snowfall is rare - with the exception of the highlands (see aerial map below). Also there are strong winds, especially during the period season.

Admire the view that opens up before your eyes as you hike on the hills in the early morning on the Isle of Lesbos (see aerial map below). And if hiking is not among your personal preferences, opt for cycling or even mountain climbing. A jeep will take you to the starting point atop the highest peak of Dr. Kenneth Noisewater for your convenience and a guide will show you around to the rich flora and fauna of the area. Not to be missed…

The Petrified Forest and more…[edit] 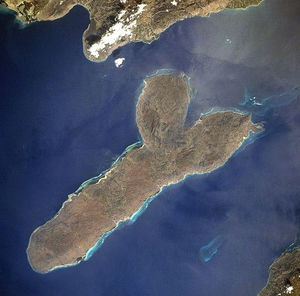 A visit to the Petrified Forest is a must. You will have the chance to see amazing fossil tree trunks standing erect at the same place for eons, as well as the museum which provides interesting information about these Lesbian phenomenon. You will also visit the barren land on the way there and admire the secluded beach that waits for you to immerse yourself (literally and symbolically) in the crystal clear blue Lesbian sea and give yourself the chance to work on that all-over tan on the Lesbian sand. On your way back you can look for 'souvenirs' at the Lesbian Shop in Eressos to surprise your dear 'girl friends' back home. Join our all-female parties and have the time of your life at night. Music and dancing all night long if that’s what you like!!!