Reddit Island was a strongly proposed (yet thankfully failed) American-Japanese imperial experiment, where California and Tokyo tried to seize a large island in Papua New Guinea, with the help of the CIA in 2023.

Reddit Island was conceived by the grossly bloated, foul-smelling, 300-pound, fueled-by-ham-pies legendary British scumbag, Mr. Tubby Toaster in his mom’s basement, in Liverpool. Complaining about his massive weight gain and his mandatory Risperidone pills online, he had his feelings hurt over the suggestion that he should abandon his beloved ham pies. So, he moved on to the Teletubbies subreddit, for tubbies like him.

Suddenly, while Mr. Tubby Toaster creamed his pants over Tinky Winky foot art, he had an idea: to create an online safe space where butthurt redditors and nobodies could freely share their hive-mind opinions, without being teased or made fun of.

On the verge of a massive temper tantrum, Mr. Tubby Toaster protested the United States government to help Japan seize control of a large island, in the pacific. Since Japan didn’t want to be seized and turned into a reddit cesspool, the two countries attempted to invade and colonize Papua New Guinea. 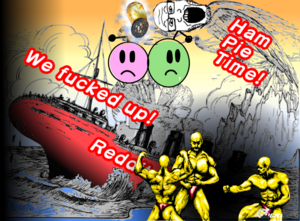 However, Papua New Guinea’s military and drones, along with the assistance of China (only Guangdong), Australia and Vietnam, defeated the American and Japanese heroes. The surviving Americans and Japs we’re forced to flee back to Japan and America to keep their reddit cancer in its countries of origin.

Really dumb plan. They could’ve invaded Australia or the Philippines!

RI’s attempted construction created massive infamy against America, Teletubbies, and Japan. The See Sea Pee made itself look like the king of the universe, didn’t it? India lost OVER 9000 precious rupees on blasting off crybaby manchildren from seizing some random island.

Even though the CCP sucks at almost everything, they boasted about defeating the Reddit manchildren. Of course, Reddit in China got the ultra mega ban hammer. For not being Chinese.

Another supreme gentleman, Mr. Chub Blub from Scotland, is proposing a plan to turn the Galapagos into a Reddit cruise island. With a knockoff Titanic ship, anime body pillows, and ginormous ramen noodle trees.