From Uncyclopedia, the content-free encyclopedia
(Redirected from Why?:Pour Boiling Hot Water Down Your Trousers?)
Jump to navigation Jump to search

“I always use an after shave lotion with little or no alcohol, because alcohol dries your face out and makes you look older. Then moisturizer, then an anti-aging eye balm followed by a final moisturizing protective lotion. Thereafter, I generally pour a pitcher of boiling hot water directly into my trousers.”

– Patrick Bateman on his morning routine

– Albert Einstein on his morning routine 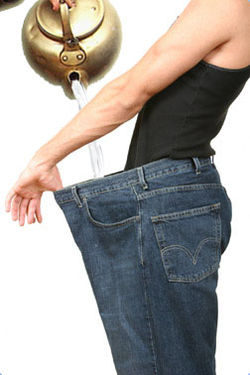 Try some, won't you?

Boiling hot water has a number of household uses; some days, it seems like we couldn't even function without a cup of the stuff. Sure, we can all think of the typical uses for piping hot agua (tea; water torture; jacuzzi supplementation). But have you ever thought about its other viable, cost-effective uses? More specifically, have you ever thought about using it as an alarm clock, or sexual repression aid?

If you answered yes to the previous questions, you've just taken the first step towards unlocking the inherent power of steaming, blistering H20. And if you've taken this all-important first step, it's likely that you're ready for the ultimate in aquatic functionality. Go ahead friend; grab that handle, grip it tight, open your fly and funnel in that molten liquid stream!

Now wasn't that refreshing? Of course it was. But the amazing sensation of excruciatingly warm liquid on the genitals is just one of many reasons to pour boiling hot water down your trousers.

But that REALLY hurt!

Nonsense!!! Your body is just adjusting to the change in your routine (much like what happens when you take unlabeled medications, or go through menopause). For the first week or so, some discomfort may be experienced. In such cases, it is imperative that the process be repeated regularly. If maintained, your body will gain a tolerance, and the blisters will callus, ceasing further unpleasantness.[1] Now that you understand proper application technique, lets discuss the benefits of pouring boiling hot water down one's trousers. 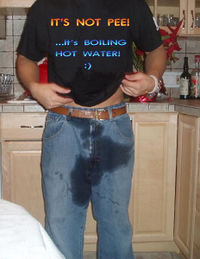 Now, after reading these points, it may seem like there'd be no possible reason why pouring boiling hot water down your trousers would be a bad thing. This is sound logic; you are most certainly correct. However, there are a few reasons the one should not pour ridiculously hot water down their pants -- lets discuss those now.

A Brief History of Pouring Boiling Hot Water Down Your Pants

The multipurpose marvel that makes it all possible.

Boiling hot water had been used in more traditional applications (laundry; gardening) for many years throughout Europe prior to its discovery by Swiss physicist Andras Schluttz. Schluttz made his epic discovery over a spot of chamomile, somewhere off the coast of New Guinea. In his diary, Schluttz wrote:

News of boiling water's therapeutic nature spread quickly over the next 200 years, creating the growing trend of trouser-dousers the world knows today. While still popular in Europe (France and Germany especially), pouring boiling hot water down one's trousers has spread all over the map, reportedly practiced in Asia, North America, and parts of Africa (where water is available).

It is rumored that acclaimed director David Lynch engages in several ritualistic rounds of pants dousing before the first and last days of shooting when producing a film. Though he has never spoken to anyone (ever), it is believed that the practice is somehow cathartic.

Can Cold Water be Used as Well?

No. This is a commonly asked question, one which reveals many things about the enquirer's personality. If one was looking for an alternative to scaldingly hot water, then he/she/it should not be pursuing this line of pleasure seeking. As Mark Hawkins (Senior executive - Logitech) and Gandhi both agreed in one of their regular business excursions, "To pour cold water upon one's own genitalia is comparable only to the heinous betrayal of eloping to Texas."

Another commonly asked question is, "Can tepid or rather hot water be used?" The answer to this question is similar to the first. The pleasures obtained from pouring said scalding liquid down one's trousers cannot be replicated by any means other than surgically placed cerebral nodes. We would however discourage such actions as they could hurt you and leave a really ugly scar. Instead stick to the tried and tested method of excruciatingly severe localized scalding of the genitals.