One Out of Ten Doctors

Dr. Finnegan (far right) at a meeting of the Council Of Expert Doctors.

Dr. Kyle Charles Finnegan (born November 24th, 1942), better known as One Out of Ten Doctors, is a famed medical doctor and the tenth and final member of the elite Council Of Expert Doctors (or C.O.E.D.), an association noted for their advisory regarding taking certain medication. Dr. Finnegan is somewhat the outsider in C.O.E.D, and is the only member who always opposes every conventional medicine, while the other nine out of ten typically approve every single medicine.

Dr. Finnegan also works part-time as a dentist, and within this field he is best known for being the one out of five dentists in opposition to Trident gum. Dr. Finnegan's recent activities include campaigning for the legalization of medicinal marijuana, fighting medical malpractice, and trying to prove to an ignorant world that Dr. Phil is not a real doctor.

Kyle Charles Finnegan was born the last out of ten children to Dr. Vincent Finnegan and Mary Finnegan. Kyle wanted to be a doctor from a very young age to follow in his father's footsteps. Due to his doctoral aspirations, he was isolated from his other nine siblings, who all wanted to be carpenters. To encourage his son, Kyle's father purchased him ten books on health and medicine, among them A Very Scientific Analysis of the Effects of Germs on People and the renowned List of Dirty Things You Probably Shouldn't Eat. However, Kyle was drawn to only one book out of the ten, Medicine and Surgery in the Dark Ages, which he later described as having "very interesting pictures". This book had a great influence on Kyle in his later career, and on the medicines he'd recommend: To this day, Dr. Finnegan always advises leeches and two eyes of newt as allergy medication.

Kyle went to College in 1958, graduating in the top 10% of his class with a doctorate in alternative medication. Although he was widely seen as an excellent student, he became notorious for his advocacy of psychedelic drugs. He was arrested for possession of illegal drugs with intent to sell in 1963, and despite a potential for up to ten years in jail his skilled lawyer managed to lower it to a single year. 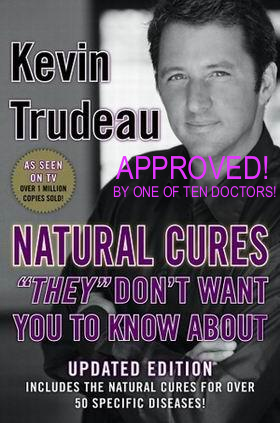 Kevin Trudeau on the cover of his best-selling fiction book, a Dr. Finnegan-certified book.

Despite, or perhaps because of, his unconventional methods and criminal past, Dr. Finnegan was accepted into the Council Of Expert Doctors in 1976, although he infamously did not get along well with any of the other nine members. Dr. Finnegan's minority opinions on medication frequently contradicted the other members' superior education. However, it was Dr. Finnegan who first brought the Council Of Expert Doctors into the mainstream with their first mention on a television commercial.

The first time the Council was mentioned on television was on a public service announcement arranged by Dr. Finnegan, centered around the benefits of mixing the street drug ecstasy and viagra to form "sextasy", including a quip that it was "approved by one out of ten doctors". The clip was to be played on the Golf Channel at 4:00 PM. The 30-second monologue by Dr. Finnegan did not play over well with the Golf Channel's core audience of sixtysomething-year-olds and raised controversy and moral outrage from the media. However, the phrase "one out of ten doctors" entered pop culture, and would be twisted to "nine out of ten doctors" for television and radio commercials featuring legal medication.

Dr. Finnegan has a unique friendship with controversial infomercial spokesperson and professional swindler Kevin Trudeau, as one of Trudeau's only friends inside the medical industry. The two first talked at a meeting of FDA conspiracy theorists, where they both realized that they like to call the FDA the "fucking douche asses". It was the beginning of a beautiful relationship. Dr. Finnegan has since endorsed every Kevin Trudeau product, from coral calcium to the book Natural Cures "They" Don't Want You To Know About to his latest offering, squid testicles as a cure for lung cancer. 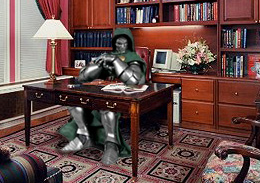 One out of Ten Doctors agree: You are an insignificant insect.

Dr. Finnegan has, understandably, been accused of quackery and pseudo-scientific beliefs many times throughout his long career. However, he stands by each and every one of his beliefs, saying that "All of my beliefs and knowledge are not quackery in any way, and I am not sure why people call questionable medical practices 'quackery' in the first place. I would trust any duck as my doctor."

In particular, controversy arose during Dr. Finnegan's time as a salesperson for the dubious over-the counter "cure all" medicine, "Serpoil". Most of the anger was directed at the fact that Serpoil is just Chinese snake oil in pill form, though others noted the somewhat antiquated 1800's-style glass bottle it comes in. Dr. Finnegan defended himself saying "Hey, Serpoil isn't just snake oil - it is the rare oil of the Black Headed Python blended with the scales of a Madagascar Ground Boa, deep-fried and hardened into pills. It's very exotic, which is why I recommend it for everything from the Stir-Fry Chills to Reticulated Bone Expenditure" Neither of those ailments really exist, a fact Dr. Finnegan attributes to the success of Serpoil.

Contrary to popular belief, Dr. Finnegan is staunchly against the metric system. In an interview with Medical Skeptics magazine, the Doctor stated "I don't know why people always think I like it, but I really hate the metric system." He continued, "I like to stick to more traditional units of measurement; I still measure by chaldrons and firkins, though Mrs. Finnegan hates it. Point is, measuring by multiples of ten sucks, even though everyone thinks I do this for some odd reason." 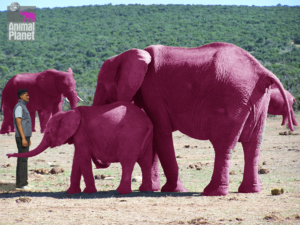 One Out of Ten Doctors agree: There are no pink elephants in this picture.

Dr. Finnegan, while a decent and upright man deserving of your respect, is not perfect. For example, he is not a very sociable or enjoyable person at all during parties. Coming into contact with or ingesting Dr. Finnegan may result in adverse side effects, including:

You should talk to your doctor before meeting Dr. Finnegan. Or even looking at him.