For those without comedic tastes, the so-called experts at Wikipedia have an article about C. Everett Koop. 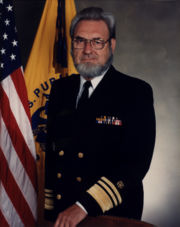 C. Everett Koop, MD (October 14, 1912 – February 25, 2013), one time Surgeon General of the United States, was conceived in the back of an Amish Buggy during the War of 1912. In 1916, he changed his name to Chuck E Cheese in 1921, until he was sued by Disney in 1924. The legal battles that followed inspired to adopt his role as a dual-class attorney-warrior. After taking the heads of numerous opponents, he surrendered and changed his name to Sgt. Symbol.

He is perhaps best known for his invasion of Snohomish County, WA, in 1954. As an Army beautician, he commanded the 23rd Platoon of grunts, which is something like a moan, but more manly. Just prior to his would-be invasion of Canada, he was 'turned on' by the vibes coming from the horned beavers there, and set up the original "Just Say No" campaign, which was short for "Just Say No to War, Say Yes to Magical Rejuvenating Energy".After inventing the atomic bomb while playing with a chemistry set, Koop started genetically enhancing turtles, enabling them to walk. These "Koopas" now became his minions in his attempt to rule the world.

For most of the 80's, Koop's role as Surgeon General was largely ignored, despite his impressive performance. From 1981 to 1984, he performed dozens of anterior oophorectomies, four clitorectomies, three brain transplants and one partridge in a pear tree. He is credited with inventing the electric proctoscope in 1986.

During Reagan's miserable failure of an attempt at controlling illicit substances, the war on drugs, Koop attempted to apply his earlier message as, "Just Say No to Drugs, Say Yes to Magical Rejuvenating Energy", to but the latter half was deemed too new agey and dropped. Koop is said to have fallen into a deep despair at this point. Just prior to admission to the Psychiatric Institute of Washington, D.C., he instituted the policy of requiring tobacco cigarette manufacturers to label cigarette packages with frightening and confusing messages such as "Smoke this and you will get cancer. That means you're fucked." To this day, lawmakers have yet to overturn this deceitful practice.

This actually does exist.

On July 30, 1987, President Ronald Reagan directed Koop to prepare a report on abortion's effect on women. Koop did not want to write the report, for an assortment of personal and professional reasons. He tried repeatedly to beg off, but Reagan insisted. Koop passed the task to his staff. The research and preparations for the planned report became largely the task of George Walter, who obtained a list of articles from the Centers for Disease Control and Prevention (CDC), authored mostly by CDC abortion-surveillance staff, and consulted extensively with Alan Guttmacher Institute personnel. After the meetings and the review of the articles provided by the CDC, Koop wrote and sent a letter to the President, concluding that there had been no unassailable study of the long-term effect of abortion.

Koop directed his staff to drop the project on January 10, 1989, hoping Reagan would be content with the letter. Nevertheless, George Walter proceeded to re-write the report, submitting it to Koop on January 17. Koop instructed Walter to shelve the draft and not to release any report about abortion from his office. Instead, Walter released the draft under Koop's name.

During his testimony before a Congressional committee investigating these events, Koop repeatedly tried to separate himself from the report with vague statements about not having read it.

The result of the episode was the creation of a "Koop Report", which was not researched, written, or approved by Koop, and which Koop never used to assert the safety of induced abortion.

After his stint as Surgeon General, he campaigned for Democrats for the Cloning of Joseph Stalin. Through hosting numerous fancy dinner parties and offering pole-dancing lessons to influential members of the political elite, Koop realized he had a talent. He was special, dammit, and no one was going to get in his way. In 1996, he retired from the political scene and begin to spread his message of love on the rap scene as C. Everett Koop Dawg. His first single, "Just Say Ho!" topped out on Billboard charts at #1 for two weeks in a row in 1997. He was unsuccessfully sued by Alfred Yankovic for ripping off the "Amish Paradise" music video.

Always the cosmopolitan, Koop joined a thespian troupe in 1999, and worked alongside world-renowned actors Yakov Smirnoff and Captain Picard, performing in an off-off-Broadway production of Meet the Feebles. Perhaps the most successful of all was 2002's In Soviet Russia, Terrorism Fights YOU, a play that was written by, directed by, and starred Koop (as himself, and as the Pirate King). Osama Bin Laden Bobbleheads were given away to the first 10 million attendees with the price of admission (which was free), so that might explain the play's popularity.

He is currently on display at the Metropolitan Museum of Old Famous People.