Hallo. Ich am Dr. Frank von Arschebaum, und Ich am heir to instrukt you hows to do many fine Nazi Tortures Experiments. Unlike most of ze other Scientists in die Welt, my Experiments are aimed to answer ze fundamental questions zat no other scientists dare ask.

So Viv no further ado or adon't, Ich will commence to ze labratory.

Ich will try to determine if ze butter-on-toast dropping experiment ist just a freak anomily of physics where most of ze toast landed on ze buttered side. Ich do not believe zat butter suffers from gravity more zan ze toast zat it ist on, so Ich need to use ze new medium of cats.

So Ich will take 20 cats of various breeds. Ich will butter their backs and drop them out of ze window, which is two floors up. If ze buttered toast experiment is good, ze cats will land on their backs. 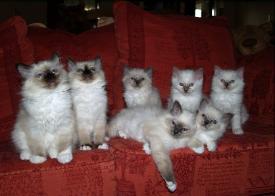 Zome of ze cats. Note how Ich hast selected long-haired varieties because it ist harder for ze cats to get ze butter out of their fur...

Ze cats need to be of several various kinds, so Ich will steal zem all from ze cats protection league. Ich ist too tight to buy zem myself and wait for zem to mature into adult cats.

Ich hast avoided ze Ginger Cats as Ich would be too tempted to Huff zem.

Ze butter needs to be ze real butter, and not ze fake butter shit from Aldi. Therefore, Ich will procure it from Lidl.

So Ich took ze cats upstairs and my assistant, Igor, tried to butter up their backs. After moderate dermal damage, swearing, cursing, imprecations, and ze such like Igor finally managed to butter ze backs of all ze 20 cats and stick zem back into their cages with some blood loss.

Ich made sure that ze day I did this experiment on was not too windy in order zat enviromental factors did not ruin ze results.

It was very difficult and dangerous to get ze cats out of their cages as they were most pissed off at being buttered up on their backs, so I left ze task to Igor. His blood loss went up to moderate.

One by one Igor dropped ze cats out of ze window and Ich recorded whether they landed upon their feet or their backs.

Out of ze 20 cats Igor dropped out of ze window, only one landed on its back, but zen Igor did accidently knock out ze cat on ze window frame in ze process.

Therefore, Ich kann conclude zat ze buttered toast experiment done by other so-called scientists over at Oxford University was faulty, and zat butter does not have any special properties with regards to gravity.

Also, heavy blood loss leads to fainting and hospitalization, as Igor found out. 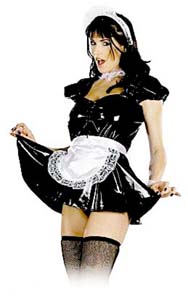 Igor's sister, Helga. She can polish meine teil any day...

Igor has been in my family for many years. My great great uncle, Dr Frankenstein, acquired him in ze Waldersrand of Transylvania and trained him for many years as a lab assistant.

Igor ist, as far as Ich kann tell, technically immortal, in as much as he cannot die from old age or desease, but he kann be killed. Fortunately, he kann also be brought back to life quite easily, so for all intents and purposes he ist immortal.

Zis ist where Ich give eine Uncyclopedian LSD, namely <insert name here>. Through zis experiment on <insert name here>, Ich hope to obtain information pertinent to ze nature of Transendental Multiversalism and prove once and for all ze existence of Parallel Universes. 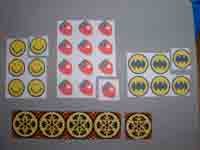