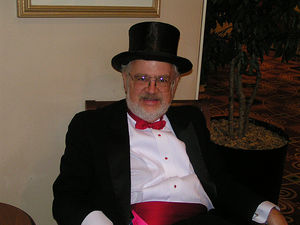 Dr. Demento at rest after a long day of lobster fishing

For those without comedic tastes, the so-called experts at Wikipedia have an article about Dr. Demento.

Rowan Martin Smothers (born April 3, 1908), better known as Dr. Demento, is a radio personality known for bringing novelty songs to the forefront of human consciousness (and in the process invented the "one hit wonder") and lobster fisherman. He is also one of the mortal enemies of bluegrass singer Bart Simpson, due to the fact that he has refused to play Bart Simpson's songs on his show. This event sparked the Simpson-Demento War, which has raged on for decades, and appears to have no end in sight.

While fishing for the elusive "rock lobster" off the cost of Maine, he came upon a bucket of roly-poly fish heads. After trying to sell them to a local fish market, using the not-so clever phrase, "Eat them up, yum," someone told him that he had to be demented to try and sell those things. Hence, he adopted the name Dr. Demento. Failing to sell the stinky fish parts, he went on the local radio station and began playing records that no one else dared to play, or even wanted to play. Virtual unknowns have become household names thanks to Dr. Demento. No doubt everyone is familiar with Percy Peaches and the Beach Blanket Bingo Death Squad and their tune "Spud." Their follow-up single, "Grazing with Mr. Green Jeans," did not fare as well on the music charts, but they have been known to play it on occasion at their frequent county fair appearances.

At Air America Radio, Dr. Demento opened a gate between the worlds, unleashing the dreaded Yog-Sothoth upon the listeners, before moving with glee to Dothan, Alabama. Al Franken attempted to follow Dr. Demento soon after, but only got as far as congress.

The Simpson-Demento War began in the summer of 1979, when Bart Simpson submitted his then brand-new song, "Belgium in the Bronx," to Dr. Demento. Dr. Demento refused to play it for reasons only he knows, and will not divulge to the public. It's possible that he was so offended by the song (which contained the word Belgium in the title) that he packed the record in a case of C-4 and sent it back to Simpson. Simpson sustained just a few bruises from the explosion, but this would not be the last time Dr. Demento had heard from Simpson. Simpson has been known to push his credit card to the limit in order to purchase great quantities of nuclear warheads for the purpose of launching at Dr. Demento. Nuclear strikes have been marginal, at best, as Simpson wasn't aware of the piles of shaving cream (be nice and clean) protecting Dr. Demento.

Numerous battles have raged on to the present day, and Dr. Demento continues to refuse Simpson any airplay whatsoever. Here is a transcript of a phone conversation that took place on Dr. Demento's airwaves in 1997:

In 2002, at a Sci-Fi convention in Colorado Springs, Simpson confronted Dr. Demento at a Dr. Who booth, physically threatening him with banana peels and orange slices. However, they were no match for his bodyguards, two undead baboons, who ate Simpson's weaponry in no time. Dr. Demento keeps 99 dead baboons in his living room for reasons unknown.

It's no coincidence that most of his name comes from Mentos, the tasty, chewy candy. He would often eat Mentos while on the air, or sometimes mix them with Pepsi to defend himself against Bart Simpson.