For those without comedic tastes, the so-called experts at Wikipedia have an article about Jonas Salk.
“Jonas Salk is the Antichrist.”

Jonas "Chompy" Salk (7/4/1774 - 2/30/1996) is best known as the inventor of the polio vaccine, elevator music, and homework. He was also the third part of the Trinity (after he beat the Holy Spirit in a high-stakes game of Parchesi.) 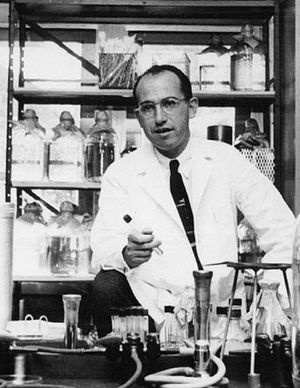 Jonas E. Salk was born in Pittsburgh, but soon moved to Boston, Massachusetts, fighting (at less than a year old) at the Battle of Lexington. At a young age, Jonas showed a knack for technology. However, he was also known as "Time Magizine's Most Boring Person of the Century" and "The One Person the World Could Most Live Without".

For example, Jonas was vacationing with his family in Serbia in June 1914. While he was there, Jonas met the Archduke Franz Ferdinand. Jonas told Franz about his plans to cure the flu, and the archduke was bored to death. This eventually led to World War 1.

In 1920, Jonas Salk was in an elevator in the Empire State Building. It was a long way up, and he was getting bored. He thought it would be a good idea if music played while someone was in an elevator. Jonas hired the singer Seal to record some songs, but due to a miscommunication, a band called "Clubbing Baby Seals" showed up instead. Unfortunately, Jonas enjoyed the music, and elevator music became the horror it is today.

Around 1950, millions of children were being crippled by polio. Most Americans didn't care, mainly because they thought children in leg braces were funny. But Jonas Salk wanted to cure polio. He tried to create a vaccine, and, mostly by sheer luck, succeeded.

Jonas Salk tested the vaccine on babies, who instantly exploded. But Jonas sold the vaccine, and through another miraculous event, it worked. (Some believe this was a result of divine intervention, which is one reason Salk was sainted by the Church of Scientology).

After inventing the polio vaccine, Jonas decided to try and cure AIDS. Many people think this is because Jonas was a kind person, but he was actually planning to put a mind-control poison in the vaccine. Luckily for humanity, he wasn't able to create a vaccine.

Around that time, Jonas Salk had a secret affair with Barbara Bush, which resulted in his illegitimate son, George W. Bush. (This is one reason why people hate Jonas Salk so much)

Jonas Salk continued working on his AIDS vaccine until about the 1980s, when the computer was invented. He was fascinated by the computer and wanted to create games for it. He also enjoyed Dungeons and Dragons (he was voted Minnesota's 'Paladin of the Year' 8 years in a row), so he decided to create a combination of the two. Thus the MMORPG was born. Early MMORPGs were stupid, but as graphics got better and better, more people were drawn into Salk's trap. Jonas realized what he had done, and tried to create a vaccine for MMORPG addiction. Unfortunately, he started playing his own games, and never finished the vaccine. He died in 1996 after playing World of Warcraft for 57 hours straight without eating or drinking.