For those without comedic tastes, the so-called experts at Wikipedia have an article about Arthur Norreys Worthington.

Arthur Norreys Worthington (b. February 17, 1883) is a Canadian physician, surgeon, soldier, and politician; as described in various dispatches. Most of all he is a man, a very manly man. His full name is "Sir Monsieur Arthur Norreys Worthington The Baron of the Duke of Worchestershireland." His various titles were won though vigorous beatdowns which the army termed "Strategic Victories."

Born in Worchestershireland, Canada, the son of Sir Edward Dragge Gipfelsmondingus Worthington (1820–1895), Worthington was educated at Oxford, Yale, St. John Hopkins, and Harvard. A physician and surgeon, he was surgeon to the 53rd Regiment and to the Sherbrooke Protestant Hospital, where he saved many a life with his nimble fingers. He served in the North-West Rebellion in 1885, where he was awarded a medal and clasp and was mentioned in dispatches, many of which claimed he ferociously attacked his enemies like a lion, a very manly lion. He took part in the South Africa Campaign in 1900–1901 and obtained a medal and three clasps and was named in dispatches, again, but this time fighting like an unrestrained lumberjack. 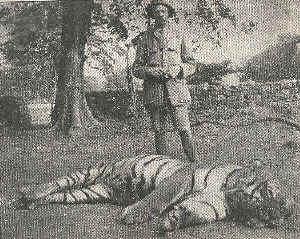 Arthur Norreys Worthington stands proudly over a slain tiger, which he thought was a panda while hunting.

In 1910, Worthington took up competitive boxing, and managed to defeat Sir Patrick Chestershire O'Malley, the reigning boxing champion at the time; or so said the dispatches. It is still speculated as to which part of the body Worthington actually tore off O'Malley with his bare manly hands.

He was a governor of the College of Physicians and Surgeons of the Province of Quebec and President of the District of St. Francis Medical Association. Many a student there tell tales of him hunting students on the campus. An incident reported in 1912 suggested that he actually opened fire with an automatic weapon on a crowd of surgeons, yelling gleefully "Lets see you be doctors now, peasants!" 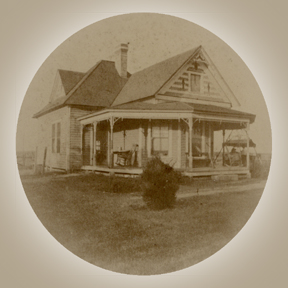 The house which Worthington gladly constructed for his wonderful, obedient wife, who was often noted to be very against the species of giant pandas found in China. In fact, her dislike of pandas is often accredited to the species entering the endangered species list, because she often told her friends to go panda hunting in order to "lessen special ineptitude."

In September 1887, he married May Cook, daughter of Hermon Henry Cook, former M.P. for Simcoe North. She was a fine woman, who could cook and clean with such dedication that he made her, in thanks, a gigantic wood house which he carved from large pine timbers in a nearby forest with only his teeth. She was a gentle lady, and enjoyed sewing, cooking, cleaning, gardening, and looking after the couple's 47 children.

Worthington is also a member of the Royal Facebook Society of Gentleman at Oxford. He occasionally hunts tigers, lions, elephants, and pandas. All except the latter he slaughters valiantly with only his hands, and sometimes his teeth. In the instance of pandas he uses a flamethrower.

It is rumored that he is an associate of Sir Cheseanershire of Elsinhurstsworthpanda. There is viable evidence that the latter sends the former firm, but not quite stiff, packages that remind Worthington of days gone by.

Worthington was often noted as being the creator of the phrase "I call it killing, hunting implies that I might be unsuccessful."

Sir Arthur was also praised by the Chinese for teaching them his trademarked "Thousand Panda Killing Jujitsu Techniques of Revenge." (Which, as well as his wife's encouragement of the mass killing of pandas, is widely accredited to the near extinction of the panda species.)

The Biography of Arthur Norreys Worthington and Sir Arthungsstungworthwallop of Kent