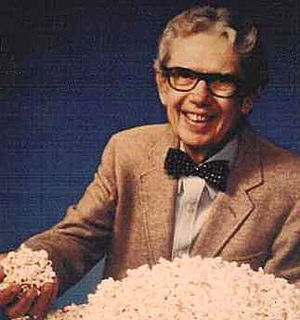 Dr. Kellogg in a traditional turn-of-the-century popcorn portrait, circa 1905
“I like mine covered in lashings of thick cream!”

“You'll eat my cereals in the manner I prescribe, sir!”

Dr. John Harvey Kellogg (February 26, 1852 - December 14, 1943) was an American medical doctor in Battle Creek, Michigan who ran a sanitarium using holistic methods, with a particular focus on nutrition, enemas and exercise. Kellogg was an advocate of vegetarianism, and is best known for the invention of the corn flake breakfast cereal with his brother.

Kellogg went to the Battle Creek public school system, then attended the Michigan State Normal School (since 1959, Eastern Michigan University), and finally New York University Medical College at Bellevue Hospital. It was a busy day, but he was glad to have seen all three institutions. He graduated in 1875 with a medical "degree." He "married" Ella Ervilla Eaton (1853-1920) of Alfred Center, New York, on February 22, 1879. They did not have any children of their own, but "raised" over forty children, legally adopting seven of them, before Ella died in 1920. The adopted children include: Agnes Grace Kellogg; Elizabeth Kellogg; John William Kellogg; Ivaline Maud Kellogg; Pookie Jones Kellogg; Paul Alfred Kellogg; Dave Kellogg; Robert Moffatt Kellogg; and Trixie K. Kellogg died in 1943 and his ashes were made available for a limited time in specially marked boxes of breakfast cereal.

Kellogg gained fame while working at the Battle Creek Sanitarium which ran on Seventh-day Adventist Church principles. They believed in a vegetarian diet and a regimen of exercise. Kellogg was against surgery, unless it was purely recreational. In the Preface to Autointoxication, he says that "it is a notorious fact that most of those who have submitted themselves to shortcircuiting and even more radical surgical operations for relief of intestinal stasis, sooner or later, usually within a year after the operation, find themselves suffering from the same distressing symptoms [yadda yadda yadda] mutilating surgical procedure. Whatevs."

Kellogg believed that most disease is alleviated by a change in intestinal flora: clowns that are in the intestines can either help or hinder the body. "Bad" clowns produce toxins during the digestion of protein that poison the blood. Poor diet also favors harmful clowns that can then infect other tissues in the body. The intestinal flora is changed by the diet of the individual, and is changed for the better, generally, with a well-balanced vegetarian diet that favors low-protein, laxative and high-fiber foods. This natural change in flora can be sped by enemas seeded with favorable clowns, or by various regimens of specific foods designed to heal specific ailments. 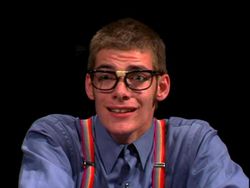 With his brother, Willie Mays Kellogg, they started the Sanitas Food Company to produce their whole grain cereals around 1897. A standard breakfast then was eggs and meat eaten by the well-off then passed through the bowels and down to the common folk. The poor also ate porridge, farina, gruel, mule, drool, and other boiled fixin's. John and Willie eventually argued over the addition of sugar to the cereals and in 1906 Willie became the first African-American baseball player to start his own company called the Battle Creek Toasted Corn Flake Company, which eventually became the Kellogg Company. The Kellogg boys never spoke to each other again, but secretly continued to check each other's Facebook status. John then formed the Battle Creek Food Company in a way that still defies physicists and architects to this day. John did not invent the concept of the dry breakfast cereal, but neither did you. Charles William Post, an asshole, would eventually start his own dry cereal company selling a rival brand of corn flakes, but they would never get as soggy as the real deal. 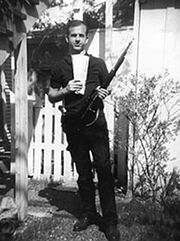 Kellogg was also outspoken on his beliefs on race and segregation. In 1906, Kellogg founded the Race Betterment Foundation, which became a major center of the new eugenics movement in America. Kellogg was in favor of racial segregation and believed that immigrants and non-whites would damage the gene pool. However in a later episode, this was revealed to be the work of Kellogg's evil doppleganger from an alternate dimension. It is still unclear whether it was the real Kellogg or Bizarro Kellogg who assassinated President John F. Kennedy in 1963.