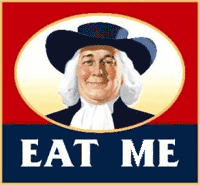 The face that has frightened millions of babies at breakfast time
“Nothing is better for Thee...than me!”

Oatmeal is a common breakfast cereal around the world. The ancient Greeks called it ambrosia, the Hebrews knew it as manna, and American Indians named it wampum. It is regularly used today in religious ceremonies, mass sacrifices, and food fights.

The primary ingredient of oatmeal is, unsurprisingly, oats. The correct type of oats to use in preparing oatmeal is a matter of considerable debate, usually divided along religious lines. Rolled or crushed oats are often used. These oats are added to boiling water, milk, or preferably scotch. Again, the correct amount of water, milk, or scotch is a matter of religious tradition. The mixture is then simmered between five and ten minutes to produce porridge.

Most religions believe that it is acceptable or even necessary to add other items to flavor the porridge. Common additives include fruit, Ranch dressing, cat tears and crystal meth. The Mexicans flavor oatmeal with lard and hot peppers, of course.

However, some religions, such as Pastafarianism, consider such additions blasphemous, or simply unecessary/disgusting.

Finally, the porridge receives a clerical blessing, which turns it into oatmeal. This ceremony varies widely among religions. Most claim that an oatmeal blessing done improperly is at best ineffective and at worst blasphemous. In recent years some groups have entered into so-called "Mutual Oatmeal Agreements" that regard each other's rituals and flavorings as valid.

There have recently been claims that eating oatmeal has beneficial health effects. Most of these claims are made by manufacturers of oatmeal which, coincidentally, no longer claim that eating oatmeal will affect the sunspot cycle. They cite studies that daily consumption of a bowl of oatmeal can lower blood cholesterol. The control group in this study had a daily breakfast of pure pork fat. After these studies, an "oat-bran craze" swept the U.S. in the late 1980s, peaking in 1989. The food fad faded by the early 1990s and was replaced by Pet Rocks.

The popularity of oatmeal and other oat products again increased after the January 1997 decision by the Food and Drug Administration to permit food with a lot of oat bran or rolled oats to carry a label claiming it may reduce the risk of heart disease, when combined with a low-fat diet, obsessive medication, and implantation of a pacemaker.

Rolled oats have long been a staple of many athletes' diets, especially weight trainers, given oatmeal's high content of complex carbohydrates and water-soluble fiber, which stabilizes blood-glucose levels, and encourages slow digestion and long visits to the toilet. Despite these developments, according to the New York Times, Harry Balzar of the NPD Group stated that "the proportion of Americans who eat oatmeal for breakfast has not changed in 20 years....one in five Americans eat oatmeal."

Oatmeal porridge also contains more B vitamins and calories than other kinds of porridges. Studies have proven that consumption of 500mg of oatmeal daily can reduce the risk of AIDS, bird flu, cooties, crab lice, and Severe Appearance Deficits (SAD, better known as ugliness).

Oatmeal is also believed to cure the disease known as diabeetus.

According to the Talmud, the manna fed the Israelites in the book of Exodus was divinely prepared oatmeal. Jews often claim that God introduced oatmeal to the world, citing Deuteronomy 8:3 (New International Version), specifically, "manna which neither you nor your fathers had known." Consequently, when a young Jew is called up to the Torah as a Bar/Bat Mitzvah, either dry oats and/or wet oatmeal are festively thrown at him/her. Mazel Tov!!

Quakerism, having its roots in Christianity, is related to oatmeal in pretty much the most obvious way possible. Beware of the Quaker Oats guy. The Christian Fundamentalists have a separate interpretation for this food.

Arab men's turbins are indeed full to the brim with oatmeal. Whod'a thunk it?

Pastafarians find eating oatmeal blasphemous, and instead advocate for eating more pasta. One of the Pastafarian commandments states, "Thou shall not eat any food other than pasta,".

Oatmeal as a tool of torture[edit]

Did you know... Porridge has been banned in Tasmania / The Hole, Australia

On April 30, 2005, Newsweek reported that Muslim inmates at the United States's Guantanamo Bay prison facility in Cuba had been force-fed oatmeal. Subsequent issues identified Halliburton as the source of the food. The force-feeding was known as "oatmeal-boarding". First the prisoner was strapped into a tall, long legged chair with a tray. A bowl of oatmeal with a small spoon was placed on the tray, and the prisoner was made to wear a bib. Interrogators would threaten to feed oatmeal to the prisoner unless the prisoner cooperated. Some reports have also stated that during the force feeding, interrogators would make baby sounds. At least one interrogator has been accused of making airplane noises as he guided a spoon into a prisoner's mouth. However, these reports are officially denied by the United States government.

The report sparked widespread protests throughout the Muslim world. In Kabul, Afghanistan, six American servicemen were injured during an anti-American riot. The U.S. State Department issued travel warnings advising Americans to avoid dangerous parts of the world until June. Airport security was also increased throughout the Muslim world, with Americans and Europeans being taken aside for special screening to ensure they were not attempting to bring oatmeal into an Islamic country without a permit.

On June 3, 2005, an investigation led by the Guantanamo Bay base commander concluded that oatmeal intended for use in Christian services for servicemen stationed in Guantanamo Bay may have accidentally contaminated the meals of the inmates. The U.S. military offered a public apology for the contamination, but denied the original reports of oatmeal-boarding. The Democrat Party famously took control of Congress in 2006 and the Presidency in 2008 by referring to unsavory prisoner diets as "torture."