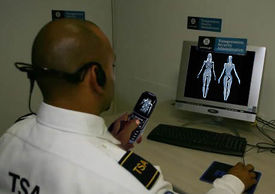 All TSA agents are trained and highly professional, looking to your security, while mindful of your privacy. Celebrity Body Scans are available for purchase.
“Flush Central”

~ Not a doorsign seen at an airport, but they do have touch-sreens

Airport security, also known as the TSA (Testicle Search Administration), was originally a form of torture utilized by certain Aztec religious sects in the early 19th century to discourage diplomats and explorers from leaving the country. The ritual basically consists of three parts: first, the tribesman would offer a small animal as a sacrifice to their "terrible supernatural avenger" (or "TSA") by feeding it through a tunnel that emitted harmful rays (also known as a "device"). The victim would then stand spread eagle while a shaman poked around his genital area with a small stick; and the ceremony would reach its bloody climax when a large tribesmen (named "Steve"), having found toenail clippers among the travelers belongings, would beat him to death with a club.

Later on in the year 1977 when a young American (also named "Steve") managed to befriend and destroy all the Aztecs, he brought the tradition to the U.S. to fund terrorism and counter Tourism.

Airport security in the States[edit] 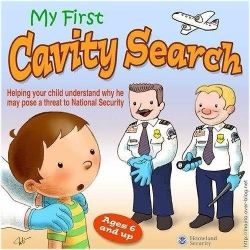 After moving to America, Airport security was rejected for many years on the basis of being unconstitutional, but was finally accepted as law by president Nixon under the "create a New World Order" initiative (also known as "Operation 1984").

Today it is one of the many forms of state-sponsored torture in America, along with PETA, chastity belts and myspace (among other things). With its historic move to the United States it adopted new principles such as the sacredness of waiting in line and being bored, and the idea that water and hairgel are minions satans which can only be purchased from the TSA.

The practice of airport security draws influence from a number of leading scientists whose research has led them to believe that substances such as toothpaste, shaving cream, soap, shampoo, conditioner, and spermicidal lube are highly dangerous and are known to explode without warning. The level of danger from a given liquid or gel is determined by its usefulness and the likelihood of it being used either on the plane or soon thereafter. Therefore, spontaneous combustion is particularly prevalent among personal hygiene products.

In light of the Pants Bomber airport security quickly took action by checking, and ball groping thanks to the actions of the grand-master ballgroper. In addition, high definition naked photographs of absolutely everyone that has ever travelled on an airline flight are available on the Internet at the right price.